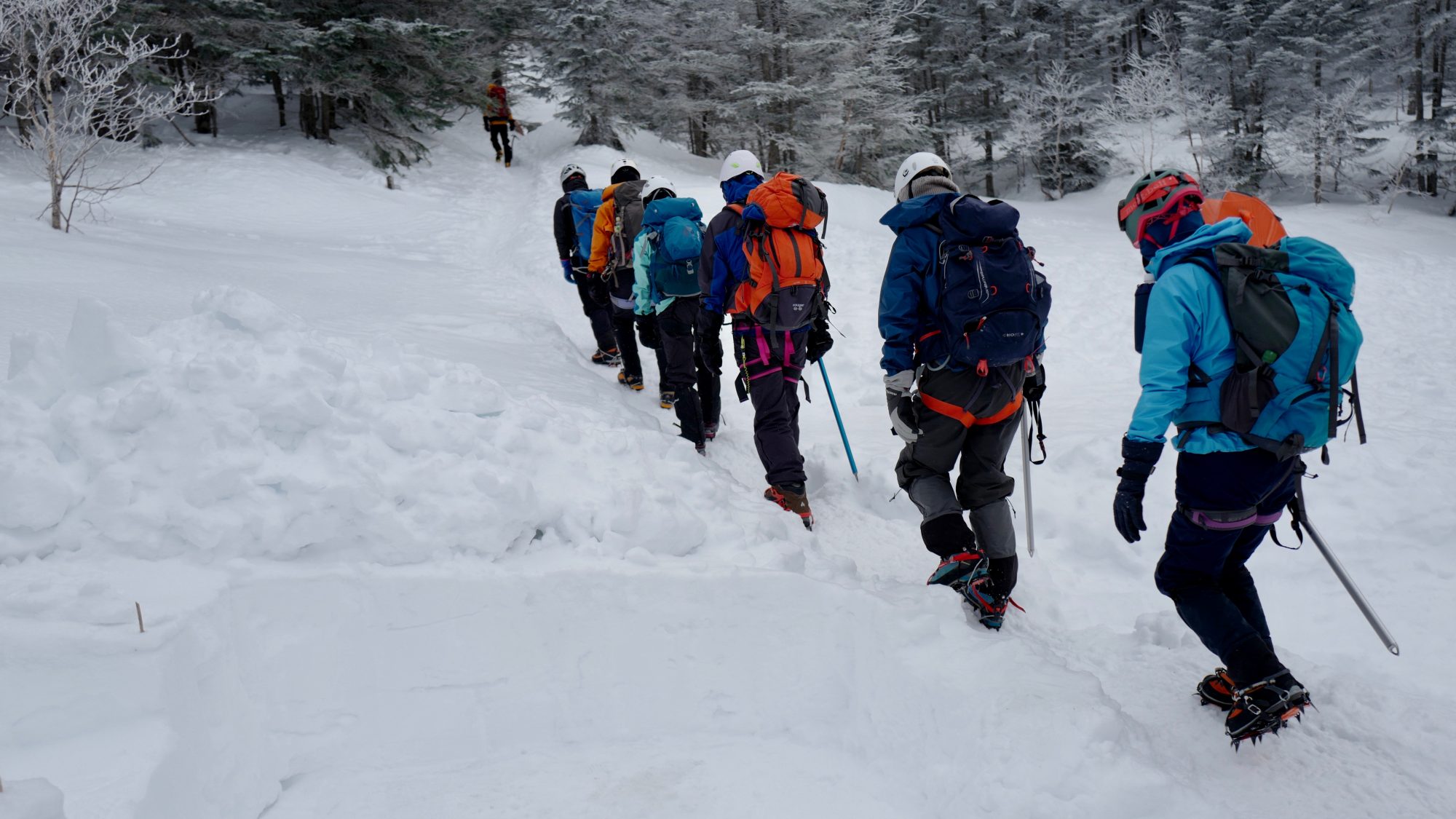 Hiking through snow is always a lot of fun, and for the past few winters, we’ve tried to squeeze in a few such trips, sometimes staying overnight in a mountain hut.

Having purchased much better sleeping bags in 2018, we decided we were ready to give snow camping a try this year, so in late March we returned to Yatsugatake for an overnight adventure.

We started our hike from Minotoguchi (美濃戸口) bus stop which is where we finished our first hike to the area in 2016, following the route towards Mount Aka (赤岳).

Since it was the end of winter the snow underfoot had turned to ice and would have been treacherous without crampons.

After about an hour following the road uphill, we reached Akatake Sanso (赤岳山荘) where an ice climbing wall had been created for people to practice in safer conditions than on the real mountain up ahead.

At Minodo Sanso (美濃戸山荘), the road ends and we began walking up the ever-steeper mountain trail that runs alongside a stream.

Taking a single step off the well-worn trail could land you waist-deep in snow, so particular care had to taken when passing people coming down the mountain.

A couple of hours later, we reached a plateau where a fantastic panoramic view of the snow-covered ridge line could be observed.

At 3.30 pm we reached Gyojakoya hut (行者小屋) at 2,350 m which was almost unrecognisable under a thick blanket of snow. It was completely closed for the winter except for a couple of toilets to one side.

There were already about a dozen other tents set up, and we choose a spot of untouched snow into which we dug a hole using a shovel we borrowed from another camper (an important piece of gear we might have to get if we do this again!).

While I probably over-engineered the depth of the hole, it did help with cutting down the icy breeze and we got plenty of compliments from passers-by!

For added insulation I placed an emergency foil blanket on the floor below our mats.

After our camp was finished, we immediately got work cooking dinner (curry rice) and boiled some water for hot chocolate. To avoid having to melt snow, we had bought a few bottles of water with us but they were rapidly freezing so we decanted them into our thermos flask.

It was far too cold to do anything else outside so by 8 pm we were tucked up in our sleeping bags, hoping that we would get through the night without too much discomfort.

While I didn’t get much sleep, I remained fairly warm until early morning when I got up to answer the call of nature at 5.45 am. It was excruciatingly cold outside.

Given that the best way to warm up was through exercise, we decided to skip breakfast and packed up as quickly as we could. My toes were numb by this point and I was keen to get walking.

I was impressed by the hardy mountaineers in helmets and carrying ice axes who were heading up to the peak of Mount Aka, not something I feel experienced enough to do yet.

Our original plan had been to walk in a circle up to Akadake Kosen cabin (赤岳鉱泉) but in the end, we decided to head down the same route we had come. We probably could have done with a few extra layers overnight but we soon warmed up.

Despite the cold, the ghostly snowscape and a chance to learn new survival skills made the trip very worthwhile. I hope we’ll be back next year, even better prepared for the harsh conditions!