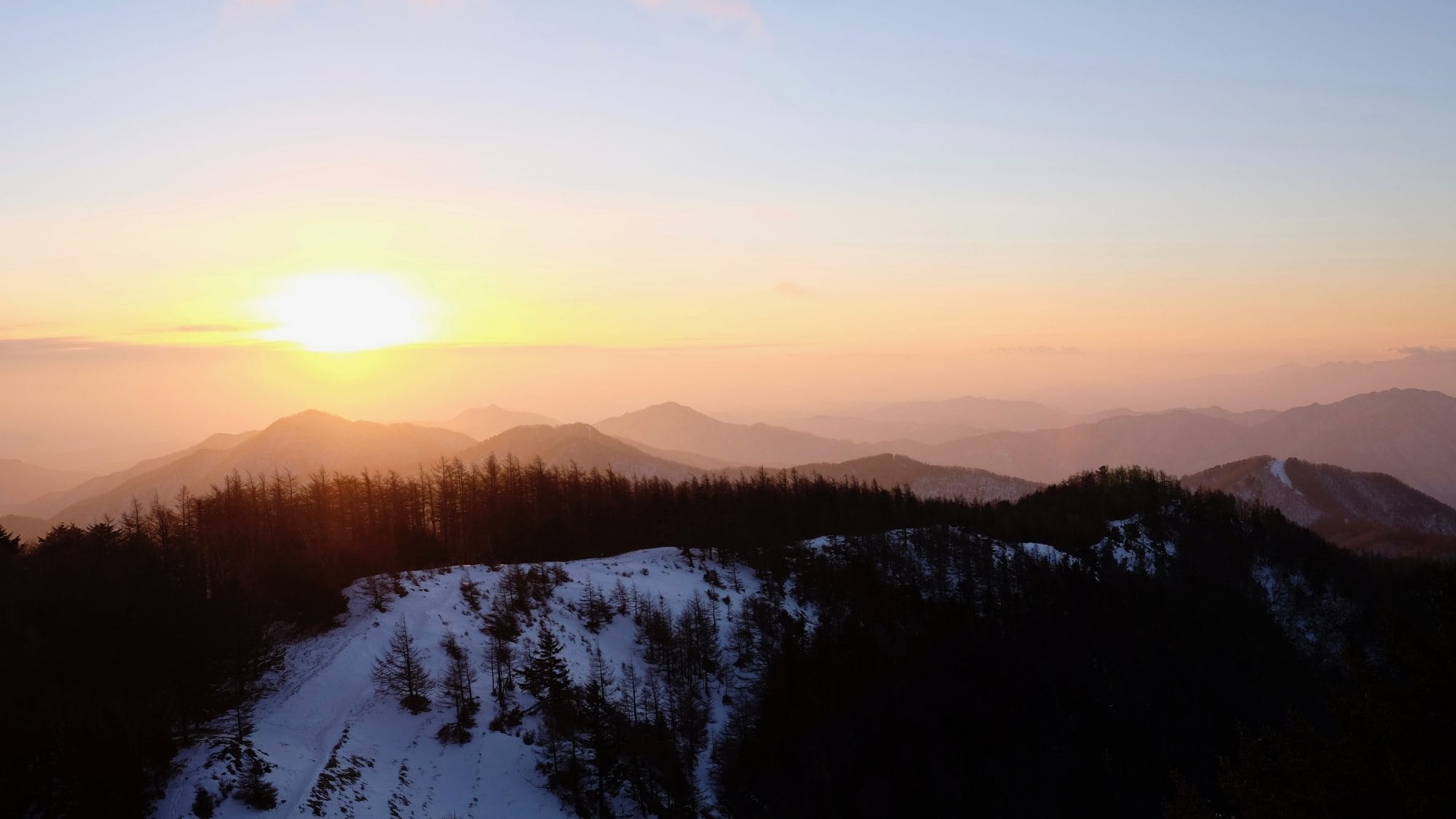 In recent years I’ve discovered the joys of hiking in Japan, where all levels of experience are catered for with well-maintained trails and some of the best mountain huts in the world. Up until this January, I’d never ventured out during the winter and, as this trip proved, I was missing out!

Mount Kumotori (雲取山) stands at the boundary of Tokyo, Saitama, and Yamanashi Prefectures. With an elevation of 2,017 metres, its summit is the highest peak in Tokyo. Its remote location necessitates an overnight stay and up until April, you’ll need crampons to negotiate the snow.

The day began with an early morning train from Ikebukuro (池袋駅) to Mitsumineguchi (三峰口駅) on the Seibu line. It was very cold but the sky was bright and clear.

While waiting for the bus, I reached for my camera, only to find that the lens cap had jammed against the UV filter which had shattered. Luckily I had a small penknife and a lens duster with me which I used to clean out the broken glass. I couldn’t get the lens ring off the camera at the time but luckily everything else was functioning normally.

The bus took us to Mitsumine Shrine (三峯神社) which is located in Chichibu-Tama-Kai National Park (秩父多摩甲斐国立公園) and the start point for the hike. The bus was almost full with a mixture of people visiting the shrine and hikers.

Even from the car park, the view over the mountains was breathtaking. Covered in snow, the landscape appeared almost blue from the reflected sunlight. It was a good sign of things to come.

The brightly painted Zuishinmon Gate is guarded by two stone statues of mountain wolves, to which the shrine is dedicated. The icy approach presents a bit of a hazard for casual visitors.

Dating from the late Edo Period and flanked by sacred trees on either side, the main hall features an incredible variety of wood carvings on the outside with lacquer work from the 16th century inside.

Having paid our respects, we walked into the forest to begin the hike, pausing only to put on our crampons for the first time.

Heading uphill, underfoot the snow had been compacted into ice and elsewhere it was 20-30 cm deep meaning we had to stick strictly to the path.

By 12.30 we’d reached around 1,500m and stopped outside an old hut to eat lunch and enjoy some hot tea. The view of the undulating mountains was just as nourishing as the food!

Two hours later, we came across another hut, this one abandoned and in a poor state of repair. Peering through the broken windows there were some rotting tatami mats and it looked like hikers sometimes spend the night there. Good in an emergency but otherwise unappealing.

We plodded on up the mountain, the light casting beautiful shadows on the pure white snow where we saw evidence of other mammalian life sharing the trails and making their own. We hoped they were made by deer and not bears or wild boars.

The trail dips down about 200m before the final ascent, providing a short breather and a good spot for a snack.

We arrived at Kumotori Sansou (雲取山荘) shortly before the sun began to set at 4.30 pm. It’s a large solidly built hut with two floors of rooms, each with a kotatsu (a table covered by a futon with a heater underneath) to warm your legs under. This was especially welcome since the rooms were otherwise unheated and even indoors you could see your breath.

We had a good meal at 6.30 pm followed by hot chocolate that we’d brought with us. Piling the blankets high for warmth, it was soon time for lights out although at 2,000m it was hard to get much sleep.

Day two began at the ungodly hour of 5.30 am when breakfast was served in the communal dining room. The reason for the early start was to allow people to see the sunrise from the top of the mountain.

Bleary-eyed, we made our way back out into the frozen landscape and began the short climb up to the summit. It was hard to leave the warm glow of the cosy hut behind.

It took less than 30 minutes to reach the peak of Mt. Kumotori which is auspiciously 2017m high. The sun was just beginning to rise and, covered by a thin layer of cloud, the expansive mountains surrounding us looked stunning.

White, blue, red and sparkling, who knew that snow could look so beautiful?

After pausing to take in the view we continued along the ridgeline to another lookout point where a small log cabin was perched.

The view here was even more spectacular with the mountain crests silhouetted against the rising sun. We stood in awe, all thoughts of the cold far from our minds.

From this point forward we headed steadily downhill, following a well-trodden trough through the snow.

As we descended we passed a number of tents which appeared to be occupied, the one above is the exact same model we own but were not nearly brave enough to use in the freezing conditions. I hope they had good sleeping bags!

With the sun now fully risen, we got our first view of the venerable Mt. Fuji (富士山) which seems to show itself on just about every hike we do.

After descending for 1.5 hours there was a short climb up to Mt. Nanatsuishi (七ツ石山) before the downhill slog continued. There seemed to be a lot more hikers on this leg of the trail than we saw the day before.

Below around 900m, the snow began to thaw out and we were back on solid ground.

We reached civilisation around noon and caught a bus from Kamosawa (鴨沢) to Okutama (奥多摩町). After a simple lunch, we paid a visit to the nearby Moeginoyu (もえぎの湯) onsen for a well-deserved dip in restorative waters.

More information about this route can be found on Ridgeline Images and Hiking in Japan.

Update: I returned and hiked the same trail in early 2018 when the snow was much deeper!