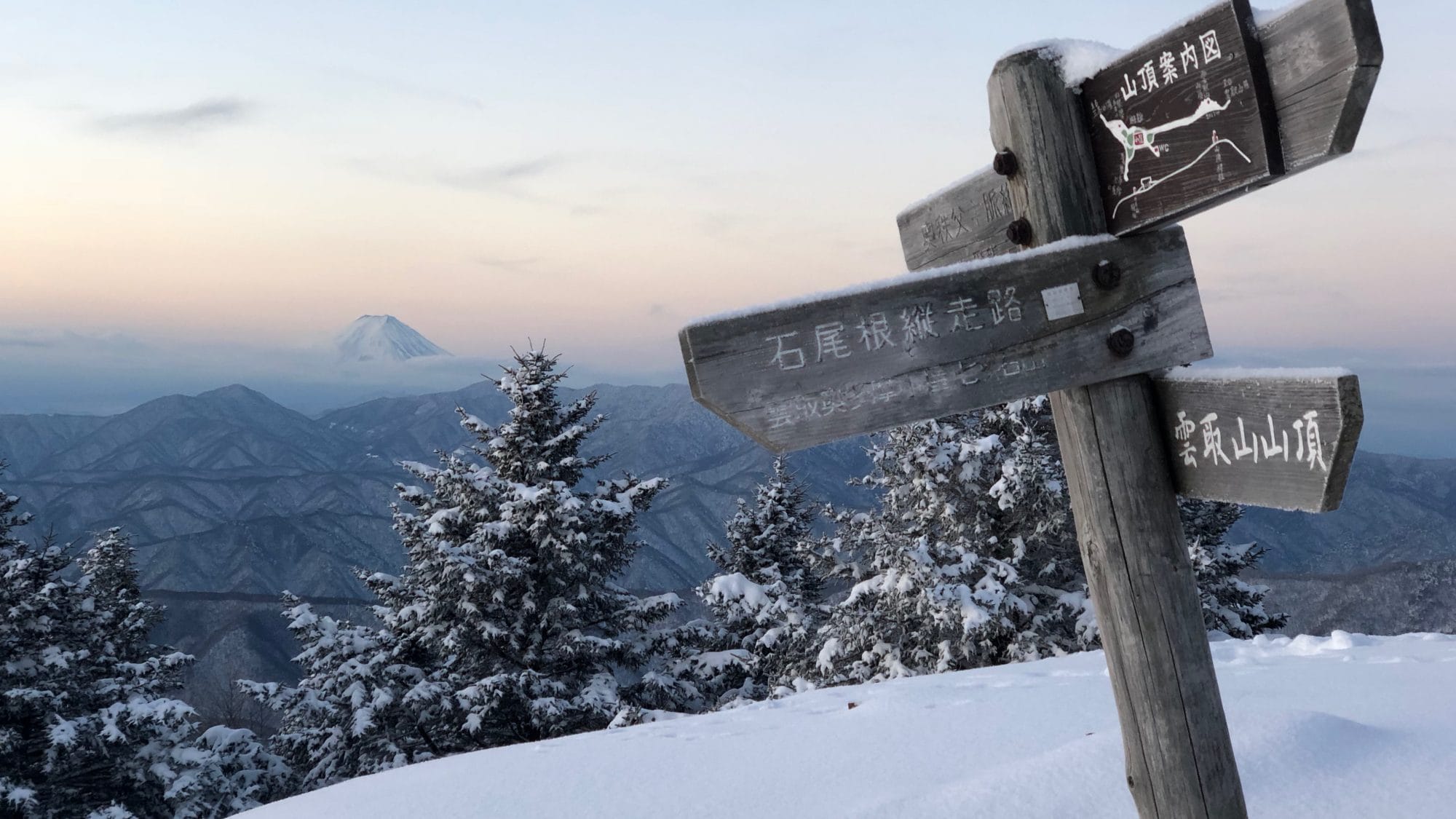 Having immensely enjoyed the same trail in 2017, in early February this year, I embarked on the overnight hike from Mitsumine Shrine (三峯神社), up to Mt. Kumotori (雲取山), and down to Kamosawa (鴨沢) for the second year running. This time I did it alone and, with snow up to my knees at some points, it was a bit of an invigorating ordeal.

Below is a photographic journal of the trip – check out the previous post for more details about the route.

The night prior to my arrival there had been heavy snowfall which had wiped out much of the trail. With this in mind, I didn’t linger long at the shrine as I knew it would be slower going than last year when the weather was clear.

Starting out at 11 am, for much of the hike up, visibility was severely reduced by dense cloud cover which leant a completely different atmosphere to the wooded surrounds. The trees, dusted with snow, were chillingly beautiful statues which dumped ice down the back of my shirt if I dared to brush past them.

My first mistake of the trip was to wear normal hiking boots without any ankle protection which allowed my feet to become damp and very cold as I ascended. My second mistake was using normal wool gloves whose tips literally froze over after being continually submerged in snow every time I stumbled over. Lesson learnt.

The only person I passed going in the same direction was an old man who must have been in his mid 70’s who I couldn’t quite believe was out in these conditions. I really hope I’m that fit when I reach his age!

The old abandoned hut was almost completely submerged in a snowdrift to one side and the opposite wall was bulging out at a dangerous angle. I wouldn’t be surprised if it’s collapsed in another year or two.

For the final leg of the walk, I was following the tracks of a deer (or some other large animal) by the light of my headlamp. It’s amazing to think of them being able to survive in these harsh conditions. I was definitely an intruder in their world.

I reached Kumotori Sansou (雲取山荘) at 6 pm under the cover of darkness, it had taken me 1.5 hours longer to walk the 9km route than last time. The hut had run out of water so was unable to serve meals and there were only a couple of other people staying there.

After putting on a dry pair of socks, I cooked curry rice on my camping stove, sitting beside a very welcome heater. I had a somewhat stilted conversation in Japanese with another hiker who seemed impressed that I’d taken the particular route given the deep snow.

With my hunger satisfied, I returned to my room, piled up the blankets and stuck my feet under the kotatsu to thaw them out. Even when tired, I’m never able to sleep properly at high altitude so dozed listening to podcasts much of the night.

After waking at 5 am to enjoy Weetabix with blueberries for breakfast, I set off into the darkness.

I was the first person to make the ascent to Mt. Kumotori (雲取山) from the hut that day and it was a really magical feeling to walk up through the forest with nothing but the brooding mountains surrounding me. I felt so removed from the rest of the world and lucky to be there.

The sun had risen by the time I reached the top and I enjoyed the breathtaking view for a few chilly minutes before beginning the descent. Because of the clouds, the sunrise wasn’t quite as beautiful as last year but the views of Mt. Fuji we’re still dramatic.

My legs were sore from the day before so going down was painful but far easier given the well-trodden trail. I passed a lot of people walking in the other direction which was surprising for a Sunday. One old man, in particular, stood out as he had a small dog attached to a lead tied to his waste. It was almost as if the dog were pulling him up the hill!

I reached the bus stop at 10.40 am, having just missed the previous bus back to Okutama (奥多摩町). Since there was more than an hour to wait for the next one, I wandered down the road to a local cafe where the friendly owner chatted with me for a good while. The cafe had lots of old hiking paraphernalia and a very cute cat. 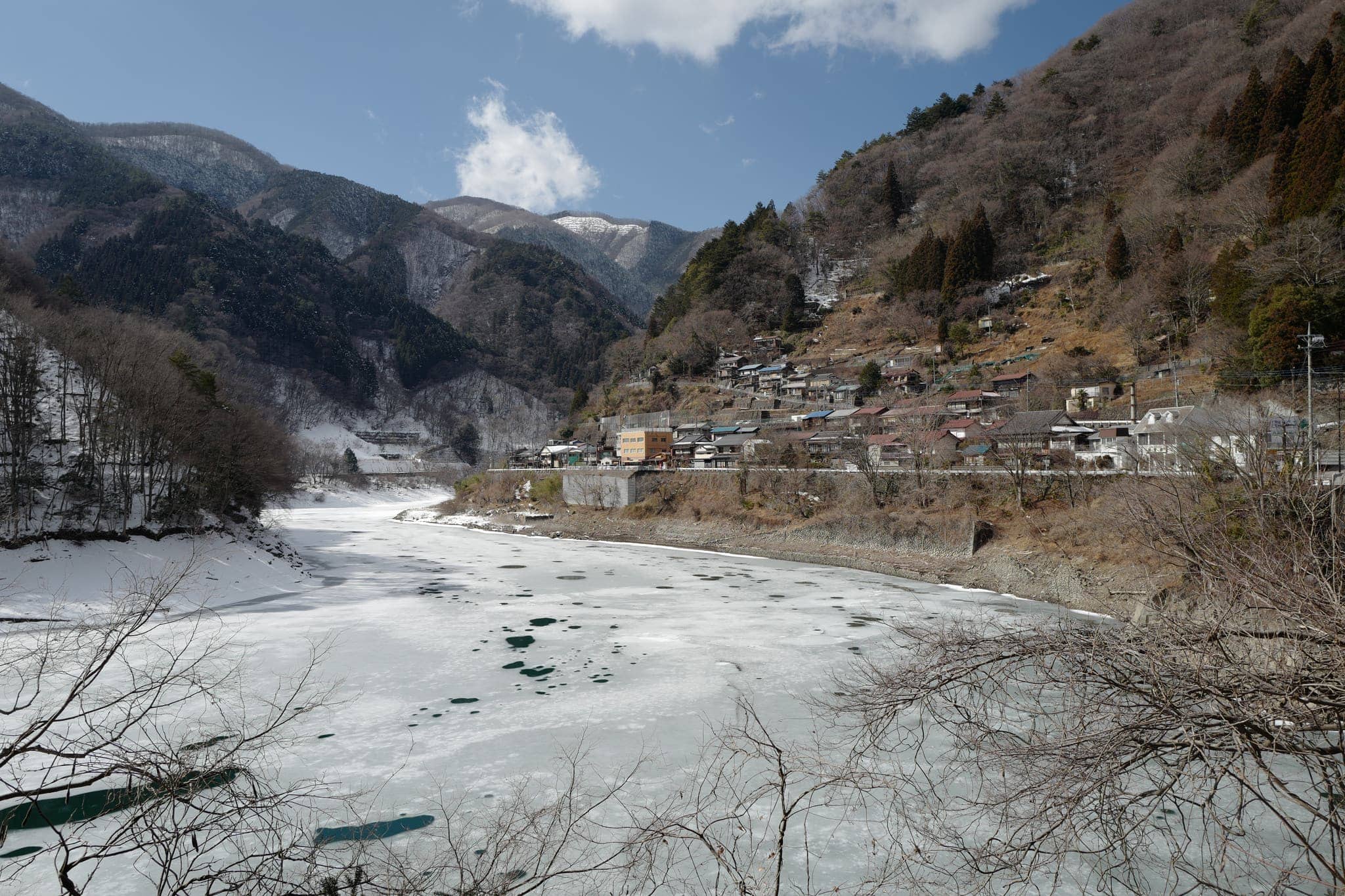 Stepping back out into the chill, I stood beside the frozen river staring back at the mountains while waiting for the bus. I hope I’ll be back again next year.