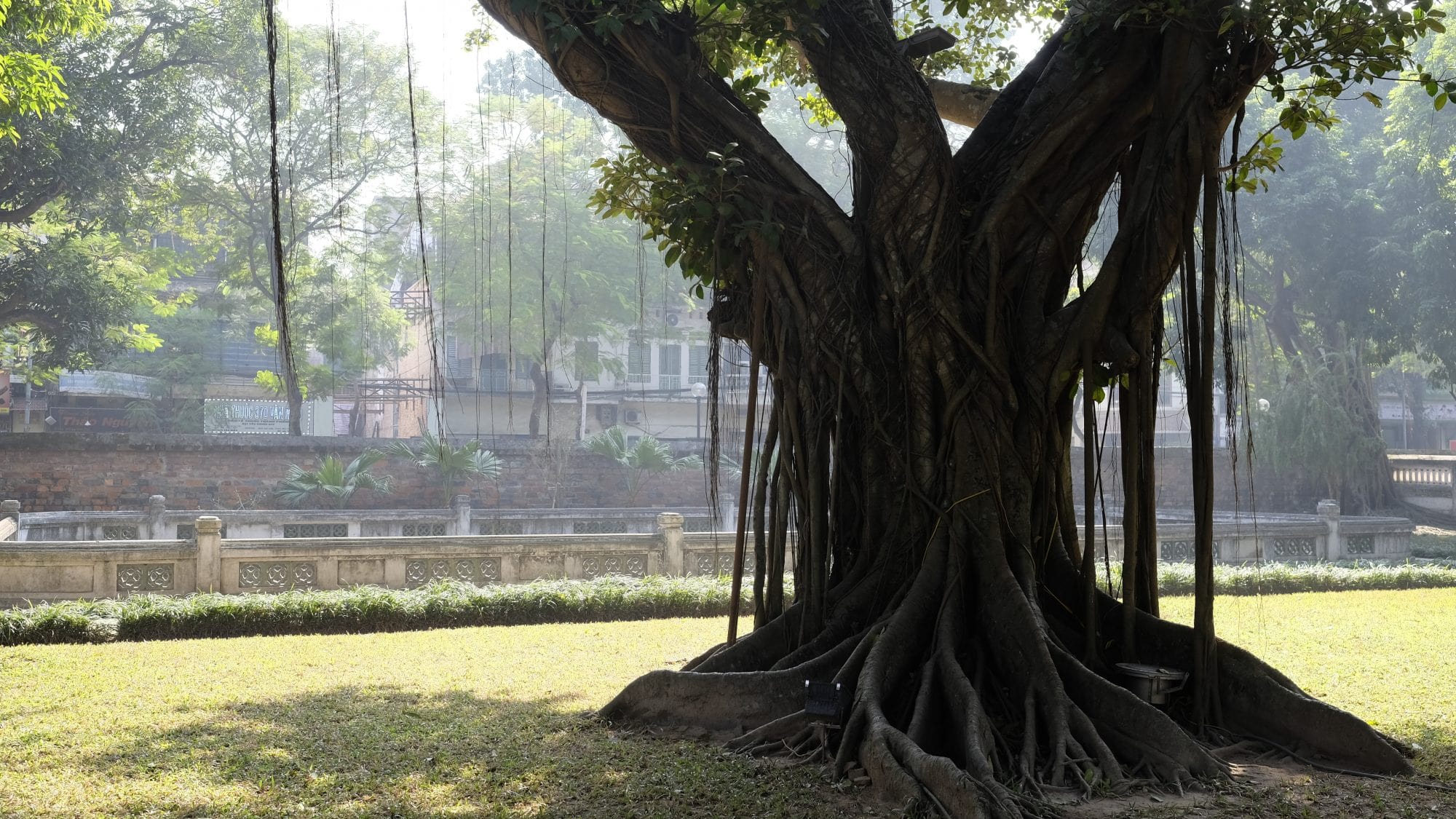 Rising early on our third day in Hanoi, we walked west towards Đống Đa District. Despite being mid-December the air was crisp and it felt like a perfect spring morning.

After 30 minutes of dodging errant mopeds we arrived at the gate to the Temple of Literature where the Chinese influences on the architecture were immediately clear.

Built in 1070, the temple is dedicated to Confucius and hosted the Imperial Academy, the first university in Vietnam. It was established to educate Vietnam’s bureaucrats, royalty and other members of the elite.

Beyond the main gate, enclosed by brick walls, are a series of quiet courtyards containing elaborate gardens and ponds. In the early morning light the trees were particularly beautiful.

Apart from a gaggle of school kids on a class trip, we almost had the whole place to ourselves and it was nice to enjoy the pleasant surroundings in peace, a luxury in Hanoi.

After departing the temple, we made our way north towards the Ho Chi Minh mausoleum. Seeing long queues we decided to give the National Assembly compound a miss and instead made our way into warren of tightly packed houses.

Arriving at a large lake in the interior we made our away around the edge and stumbled across another bustling street market. Whether you are looking for eggs or the hens that lay them, the market has you covered!

Further on we passed a smaller lake which is home to the twisted remains of an American B-52 bomber that was shot down in 1972. It’s a sobering reminder of the war.

Having found our way out of the maze, we caught an Uber to the Vietnam Museum of Ethnology which covers the 54 recognised ethnic groups in the country.

The highlight of the museum is an open-air exhibition showcasing the traditional architecture of the ethnic minorities, particularly those who live in Northern and Central highlands.

Not having known beforehand that Vietnam was a multi-ethnic country, it was amazing to see the variety of intricate buildings made by hand from natural materials.

I particularly liked this building raised up on a high platform with a sharply angled thatched roof and bamboo floor. It looked like it belonged to an African tribe.

In the afternoon we rented bicycles from The Hanoi Bicycle Collective to ride around the enormous West Lake. There wasn’t a huge amount to see en-route but it was good to get some exercise and we were treated to a sunset on the way back.

The day ended fittingly with a hot bowl of pho from Phở 10 Lý Quốc Sư. They only have a couple of options and you can’t go wrong with any of them.