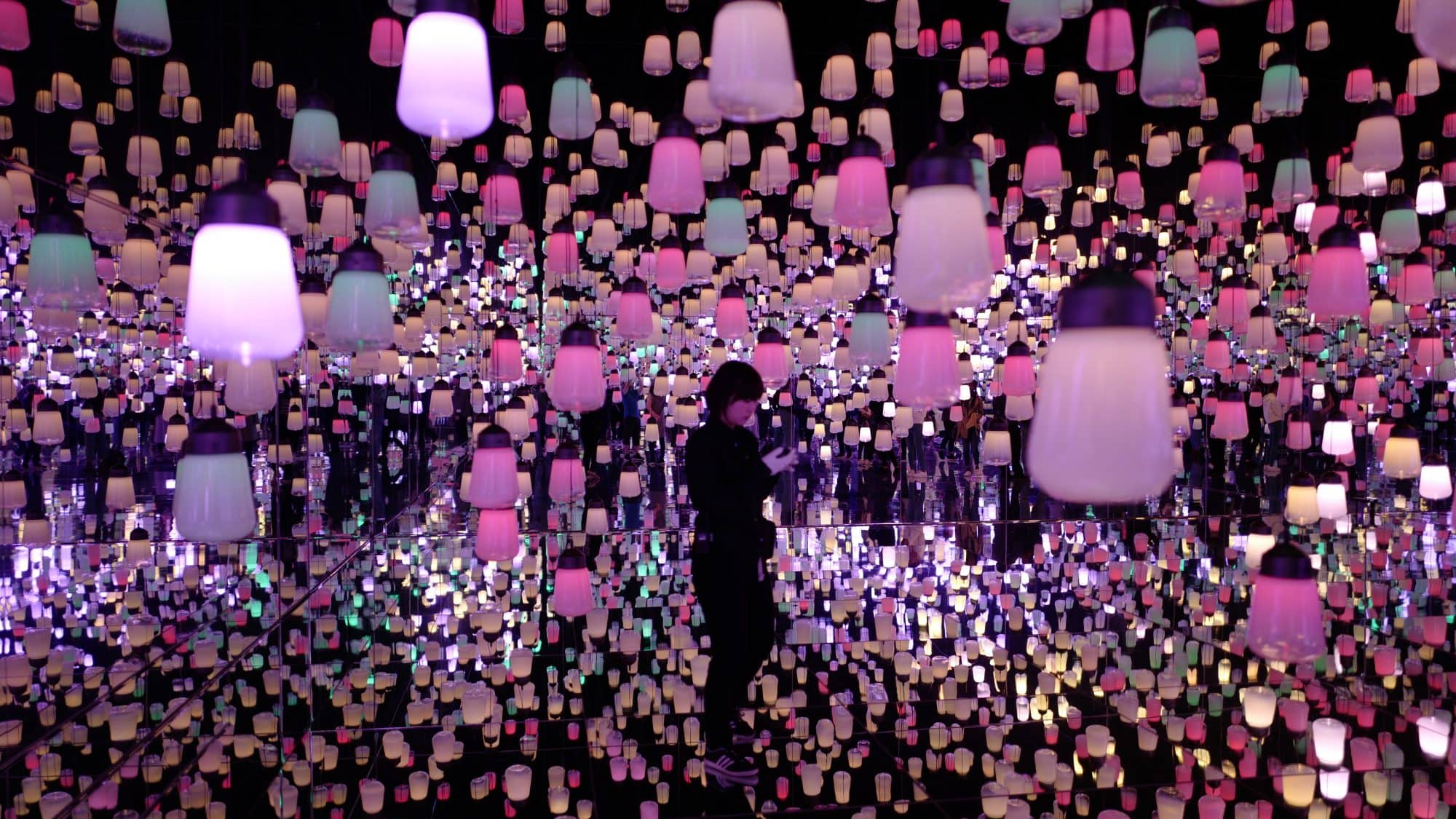 Between entertaining visitors, a fractured leg, and preparing for a wedding, life has been rather manic for the past few months hence the last of updates. Until this weekend I’ve not had much of a break and this looks set to continue till towards the end of the year.

Nevertheless, it’s been an exciting year and I wanted to briefly share some of the highlights so far.

Despite a false start back in September 2018 when typhoons tricked trees into blooming six months early, we still got a good bloom this March.

Our neighbourhood was lovely as usual and we managed to get out a couple of times to enjoy hanami in the park.

There is something undeniably democratic about celebrating the changing seasons in Japan which I’ve not seen anywhere else. Everyone enjoying the same trees with the same food and drink at the same time.

On a wet weekend in April I took some family members who were visiting Tokyo to the recently opened teamLab Borderless digital art museum in Odaiba.

The groundbreaking immersive experience fills the 10,000 square meter space with interactive works which are projected on the walls from all directions. It’s as impressive as the videos on the website make it look and fun for people of all ages.

Be prepared for long queues and annoying Instagrammers.

Sachs has produced a complete, alternative material culture, from bowls and ladles, scroll paintings, vases, and bronzes, to a motorized tea whisk, a shot clock, and an electronic brazier.

I love his DIY bricolage aesthetic where functional contraptions are made out of readily available or collected materials whose previous life is not disguised but embraced.

While in other hands an artist could easily swerve onto the path of cultural appropriation, Sachs has clearly spent a great deal of time studying the Way of Tea in evidence by the 500 perfectly imperfect chawan (茶碗) tea bowls which he made while preparing the works.

I ended up visiting most of the satellite exhibitions, including the “Indoctrination Center” where visitors could watch videos explaining his process and strict set of rules which were developed for his assistants.

In late May I took a week off work to walk 180 km around the little-known Shodoshima Pilgrimage, which like it’s bigger brother in Shikoku, encompasses 88 Buddhist temples.

It was a wonderful chance to disconnect from reality for a few days and be alone in nature with nothing to do but put one foot in front of the other.

I’ll be posting a full day-by-day trip report in the coming weeks.

After a freak bouldering accident put my better half out of action for over two months, we decided that we needed an easy trip outside Tokyo. In June we hired a car for the day to visit Hara Museum ARC in Gunma. The contemporary art museum displays a rotating collection of works by both Japanese and foreign artists.

Situated in the foothills of Mt. Haruna, the museum’s large-scale wooden buildings with their sleek black buildings (designed by Arata Isozaki) stand in stark contrast to rich greens of the surrounding highland scenery.

While the exhibitions weren’t much to write home about, we appreciated their wheelchair-friendly facilities and the quiet cafe to relax in.

On our way to Hong Kong and Singapore in late mid-June, we stopped off in Shanghai for the weekend to catch up with friends and prepare a few things for the coming wedding celebration.

With blue skies and comfortable temperatures, the weather was the best I’ve ever seen it in Shanghai, unlike the usual smoggy hellhole it can be.

We visited the Power Station of Art, the first state-run museum dedicated to contemporary art in mainland China. The enormous building sits on the Huangpu River and was renovated from the former Nanshi Power Plant.

The highlight was an exhibition of Hélène Binet’s architectural photographs (1988 – 2018) including a new series focused on the walls of gardens in Suzhou (somewhere we will be visiting again later this year).

We spent an afternoon in the studio of a friend who is a photographer. It was great to see his collection of film cameras and I can’t say I wasn’t more than a little jealous of his workspace in an old factory.

Whilst I’ve never lived in Shanghai, it feels like a second home and somewhere I always enjoy returning to.

I visit Hong Kong every 4-6 weeks for work and don’t usually have much time to explore but on this occasion, we had a team outing to Lamma Island.

What made this particular occasion memorable was the boat trip to the island which began at sunset in less than ideal weather conditions. I was surprised they let us stand on deck!

Luckily we left the bad weather behind us once we were out of Victoria Harbour and enjoyed a fun evening eating seafood near Aberdeen Pier.

On the way back we got a great view of the Hong Kong skyline which is as glorious as always despite the turmoil its people are currently going through.

After Shanghai and Hong Kong, I was lucky enough to visit Singapore for the first time. I’m going to write more about this trip but here are a few first impressions:

I was only there for a few days but I hope to return and scratch beneath the surface a little more in the future.