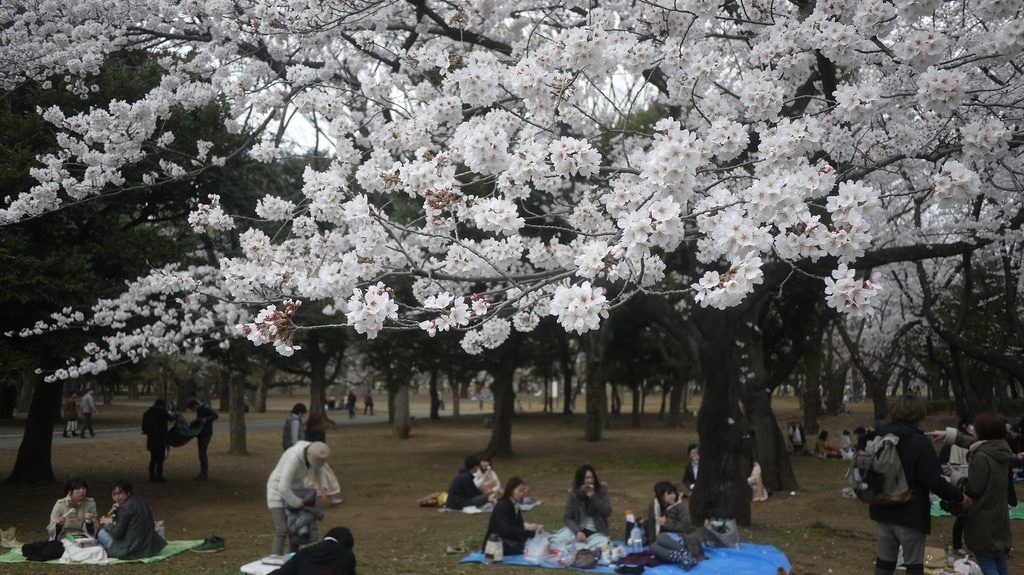 From the end of March to early May, sakura (さくら cherry blossom) blooms all over Japan, and I was lucky enough to arrive in Tokyo at just the right time to see them at their height. Aided by a national blossom forecast (桜前線), locals take part in a centuries-old traditional custom called Hanami (花見) which literally means “flower viewing”.

A hanami party basically involves gathering with friends, family, or coworkers under the sakura trees and consuming copious amounts of alcohol and snacks while playing games or listening to music.

In order to get the best spot people will send someone out many hours or even days before to reserve a space by spreading out a tarpaulin on the ground and sitting on it until the others arrive later. This usually falls to the most junior member of the party!

Unlike what you might expect from somewhere like the UK, the drinking is jovial rather than raucous (most of the time) and everything is very well organised.

It’s also common to have celebrations under the sakura at night, known as yozakura (夜桜). In some places, lanterns are temporarily hung to enjoy the scenery.

My first taste of hanami was in Yoyogi Park (代々木公園), adjacent to Meiji Shrine in Harajuku.

To say it was packed would be an understatement!

My next stop was Chidorigafuchi (千鳥ケ淵) in Chiyoda where hundreds of cherry trees line the moat of the Imperial Palace.

Despite the overcast weather, the view of the overhanging trees reflecting in the water was really spectacular.

The blossom also coincides with graduation time for Japanese students and there were many girls dressed in traditional kimonos, adding to the unique atmosphere.

Since there were so many people the Japanese traffic police were on high alert to control the crowds. They all carried small light sabres!

I briefly popped into Yasukuni Shrine (靖国神社) which is nearby and is dedicated to those who died on behalf of the Empire of Japan.

The shrine has been the centre of controversy over its enshrinement of multiple war criminals from World War II which has caused much tension, particularly with China, when prominent Japanese politicians have visited it.

Nevertheless, amongst the sakura, it’s a pretty spot to visit.

More police to keep people moving in an orderly fashion.

Luckily he didn’t mind having his photo taken!

The sakura paparazzi in action.

There were long queues of people waiting to hire rowing boats.