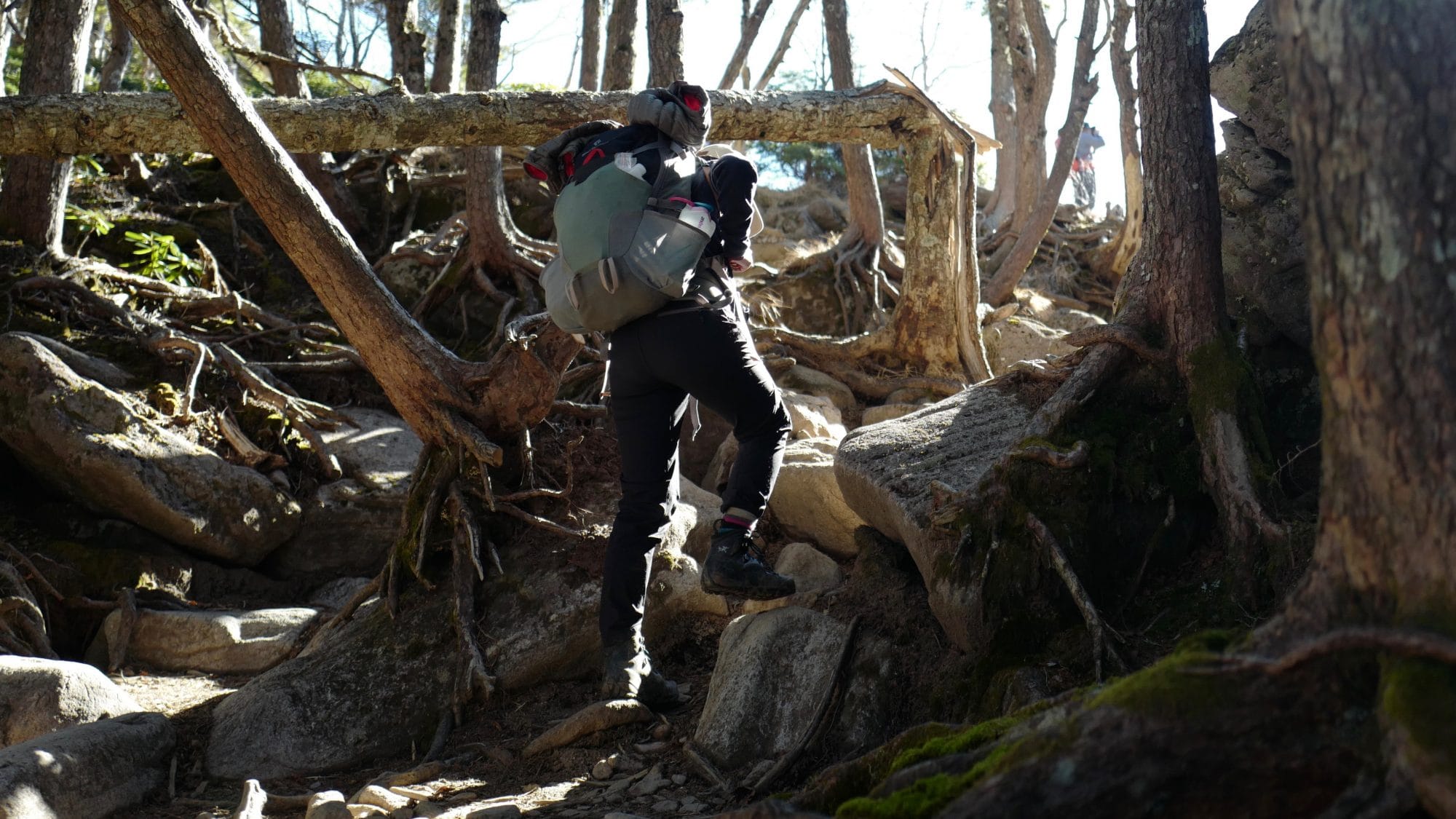 One of the first major hikes we ever did in Japan was to Yatsugatake (八ヶ岳), a stunning mountain range on the border between Nagano and Yamanashi prefectures. That was back in 2015 and we didn’t return until late autumn 2018 when we took an overnight trip to Shirakomaike Lake (白駒池).

The first day of hiking followed the exact same route we took before, starting at 11.20am from the trailhead at Shibu no yu (渋の湯) beside a slightly tired-looking ryokan/onsen.

The valley was shrouded in mist as we began the hike upwards towards  (高見石) hut, the moss covered floor resplendent in its unending shades of green.

My favourite part of this route is the narrow boulder-filled ravine which you need to scramble up before reaching the tree-line.

Moss viewing is a popular hobby in Japan and more than 500 varieties can be observed in the Yatsugatake Mountain Range alone. The humid climate, alkaline soil and densely packed tree canopy allow mosses to thrive here.

We arrived at Shirakomaike Lake (白駒池) at 2.40pm after what seemed like a much easier hike than I had remembered and this time we were not in a rush to set up camp.

Nearby, Shirakoamaso Inn (白駒荘) has been greatly expanded with a brand new building which contains a small shop and restaurant on the ground floor.

The lake was beautifully calm but we had missed the autumn colours by a week or so unfortunately.

After retiring to our tent early the night before it was hard to get out of our cosy sleeping bags the following morning. Seitaisou campsite (青苔荘) only had a few other campers but one of them had been snoring so loudly during the night that I doubt people got much sleep.

The morning was fresh and clear with a slight breeze when we set off at around 9 am, walking clockwise around the lake on a trail we hadn’t walked before.

We passed through another moss field by way of a boardwalk which snaked around the edge of the lake before taking the left-hand fork up towards New (ニュウ).

Frost on the ground sparked in the early morning light as the sun warmed our backs.

After about 45 minutes of walking, the path forks again and continues up steeply over gnarled tree roots and large boulders.

By 10.30 am we reached a rocky outcrop at the 2,352 m high peak of New (ニュウ). We were afforded great views back down to the lake and on the opposite side towards Mt. Iō (硫黄岳) and Mt. Tengu (天狗岳). On a clear day you might be able to spot Mt. Fuji.

We continued walking along the ridgeline until the trail meets the Nakayama Pass (中山峠) where we got a great view of knife-edge that we had hiked along three years prior.

At 11.40 am we arrived at Kuroyuri  (黒百合ヒュッテ)  and decided to stop for an early lunch. It’s a really well maintained hut with friendly staff, good food and clean loos!

We completed the rocky loop back down to Shibu no (渋の湯) by 2.10 pm, just in time for the bus to Chino Station (野駅).

This was an enjoyable circular route that wasn’t too strenuous and can easily be done over a weekend. If you’re more adventurous and have a bit more time check out the trail which runs south to Mount Aka (赤岳) and nd.