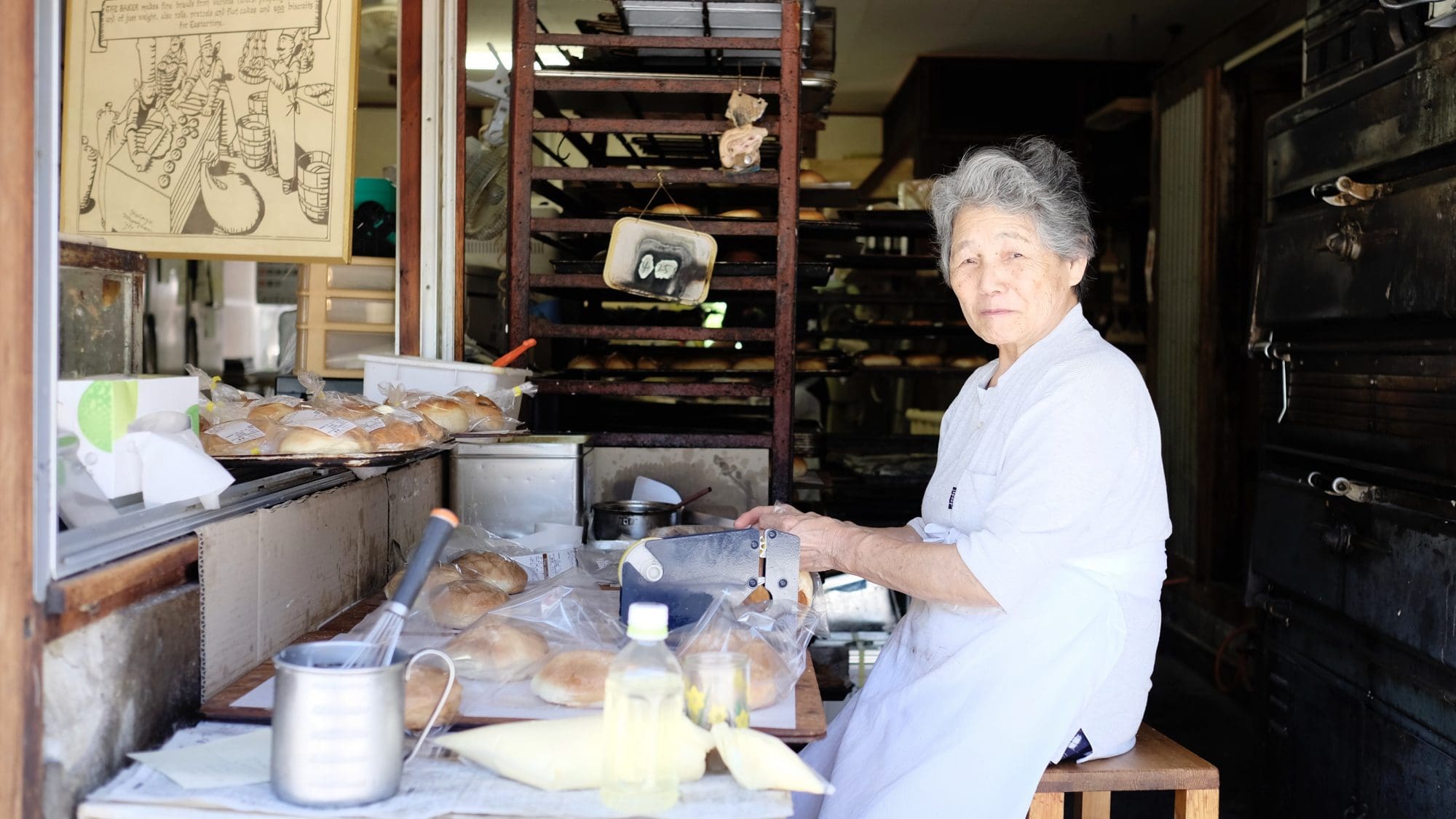 I woke early as usual just in time to see the sunrise over Cape Muroto at 5 am. After breakfast I got the bust up to Shinshō-ji (津照寺 – 25), where I had finished walking yesterday, and continued on by foot towards Kongōchō-ji (金剛頂寺 – 26) which was only 4km away.

After a short-sharp hike up a steep hill, I arrived at Kongōchō-ji around 8.30 am and sat down for a while to catch my breath. The symbol of this temple is two interlinked circles and I wondered if this means anything special.

Afterwards, I hiked down to Fudō-iwa, the inner sanctuary (okunoin) of Kongōchō-ji which lies along another spectacular rocky stretch of coast.

On the horizon, I spotted a map who had rowed a small rubber dingy out to a rock nearby and was quietly fishing with his back to the mainland. Not a bad life.

Continuing north along the coastal road I reached Kiragawa Antique Street whose maze-like roads, white plaster walls and tiled roofs are much the same as they were in the late 19th century. Personally, I think the whole island is trapped in a time-warp!

I came across the lovely family-owned “Home Bakery” where I bought some red bean doughnuts for lunch and was kindly given an extra cream cake as osettai. The grandmother was hard at work at the front of the shop and beamed when I took her photo.

Sitting outside on a wooden bench to enjoy my delicious spoils I reflected again on how kind and generous people were to strangers in Shikoku.

Further up the coast, the henro trail cuts the corner by crossing over the top of a hill. I always love it when there’s a chance to get away from the main roads and enter the cool green forest.

On the approach to central Nahari / Tano Town, I passed a lumber mill and steel works, the first industry other than fishing I’d come across. There was also a garage outfitting trucks with garish custom cabs. This seems to be quite a popular thing which I’ve seen elsewhere in Japan.

Walking through Tano my feet were really beginning to ache and I stopped at a combini to buy some more supplies. The town also has a lot of lovely old stores but I worry about how much longer they’ll be around.

After walking over 35km I finally reached my destination for the day around 4.30 pm. It was too late to hike up to Kōnomine-ji (神峰寺 – 27) so I set about searching for a place to camp.

On the way, I spotted a large gazebo-like structure that turned out to be a tsunami refuge (i.e. to get above the incoming wave). Every few hundred meters along the coast I’ve spotted signs directing people to higher ground and where there isn’t any they build something like this.

A local pointed me in the direction of a gas station which had a bathroom near the beach and after a quick inspection, I found a spot I liked near the sea wall facing the ocean.

By now I was feeling pretty hungry and inquired at the nearby Drive-in 27 whether they were serving food. They weren’t so I backtracked 1km to Teru Port Yasuda where I was able to get a wonderful oven-baked curry and a chocolate cake.

I used their bathroom for a quick wash down and change of clothes before heading back to the beach to set up camp. Except for a couple of dog walkers, I had the beach to myself and was inside just as the sun had set. All-in-all a very good day.