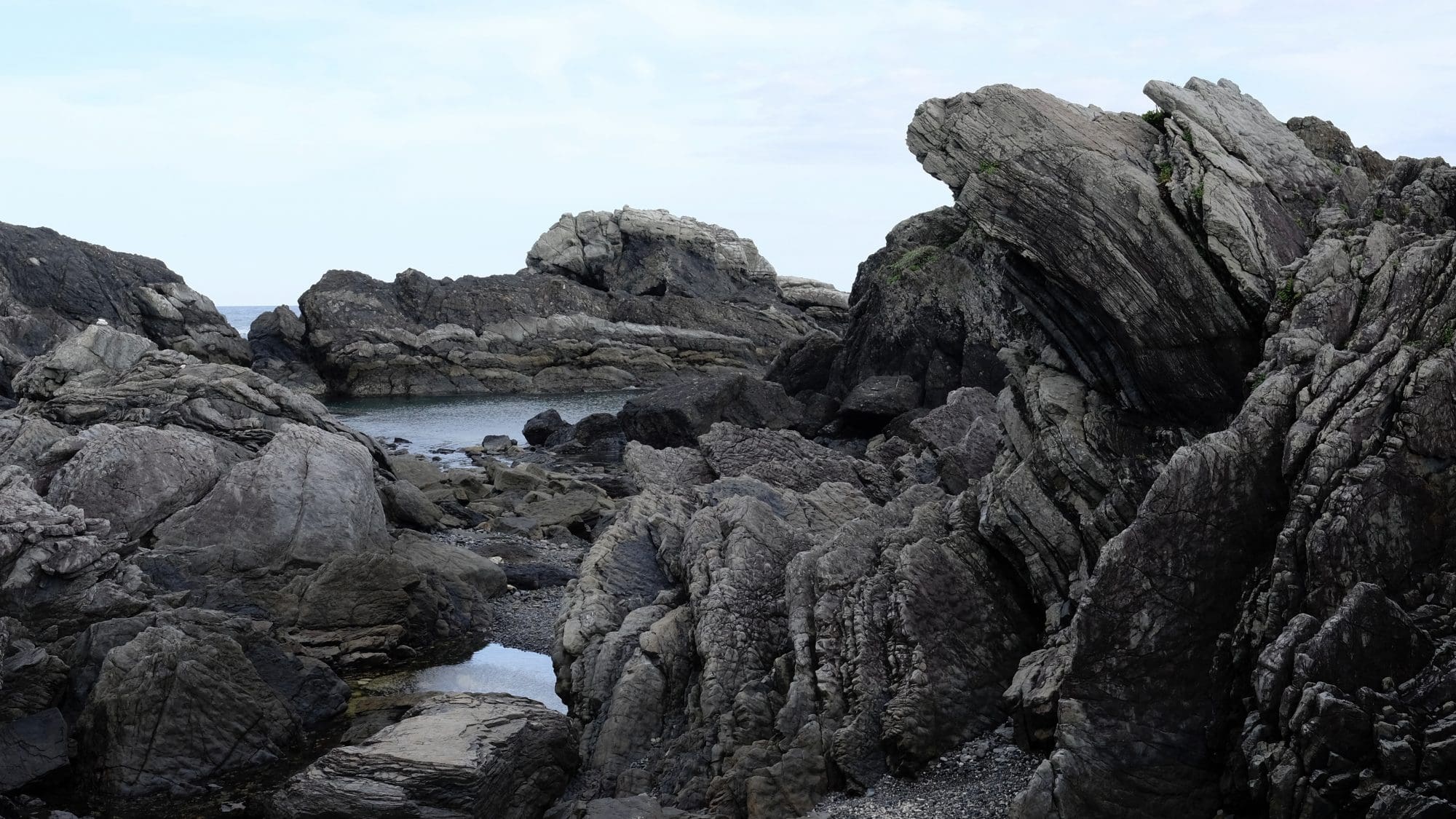 After two days of heavy rain, the weather finally broke today and by mid-morning, the sun was shining. Things were looking up.

Setting off at 7 am I made good progress down the eastern edge of Route 55 and passed “Deep Sea World” around 10 am.

Here I bumped into a fellow henro who was staying at the same minshuku the previous night. I think his name was Toshi and we made small talk in broken Japanese/English on the way to Mikurado Cave (御廚人窟) below Hotsumisaki-ji (最御崎寺 – 24).

In these caves, Kōbō-Daishi purportedly underwent ascetic training. After looking out and seeing the view of the sea and the sky he changed his name to Kūkai, signifying that his prayers will be as wide as the sky (kū), and as deep as the sea (kai).

There had been some recent rockfalls in front of the caves and the entrance is roped-off but they don’t stop anyone from going in (at your own risk).

Although I’d only walked about 15km I’d booked to stay at Muroto-so minshuku on the tip of Cape Muroto and since it was so near, I left my bag there before climbing up to Hotsumisaki-ji.

The temple itself is another beautiful one surrounded by trees high on the mountainside. Since I wasn’t in any rush today I spend a little more time wandering around and soaking up the atmosphere.

Another old henro who I’d met two days ago gave me half a banana which was very welcome since I had finished all my snacks and there wasn’t anywhere nearby to eat.

I decided to walk onto Shinshō-ji (津照寺 – 25) since it was only 7km away and I had the whole afternoon free. The road took me through a nice old fishing village where, as usual, the few people I saw were very elderly and many homes looked empty.

Before visiting the temple I went to a combini (convenience store) to get some food for a late lunch which I ate sitting at a bus stop. A few school kids passed on their bicycles and politely said “konichiwa” as they always do in these parts.

Upon arrival at Shinshō-ji I bumped into Toshi again on the long stairs up to the main hall. It’s a small temple and not the prettiest since the buildings seem quite modern but is in a nice location near the sea.

Instead of retracing my steps back to the minshuku by foot, I decided to take the bus (it’s not cheating if you’ve already walked it!). When I arrived I walked out onto the beach where you can see some amazing rock formations where sedimentary layers have been pushed upwards over millions of years.

After dinner, once it was pitch black outside I wandered back down to the beach and gazed up at the moon and start as the strong beam from the lighthouse above swept the coast. Not a bad way to end the day.

Since the weather forecast looks good for the next two days I’m hoping to camp out tomorrow night. Fingers crossed I can find somewhere suitable to pitch my tent near Kōnomine-ji (神峰寺 – 27).