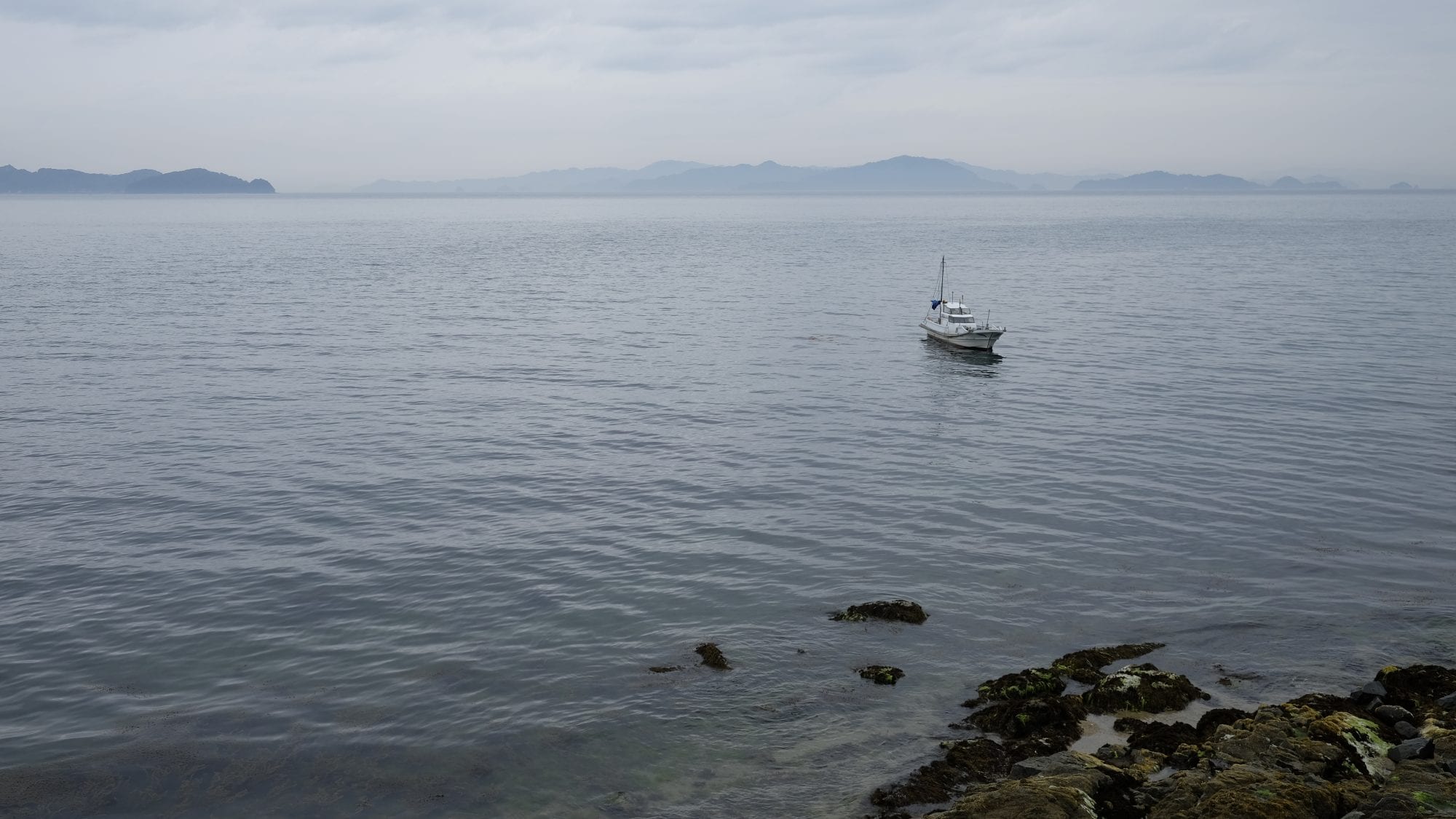 I woke extra early this morning at 5 am since I wanted to get as much walking done as possible before the forecasted rain due late morning. On the way out I met Tom who’d had a similar idea but was going to take some shortcuts by train since he was running out of time on his tourist visa.

There wasn’t much to see as I left Matsuyama on the trail which runs past Yoshifuji-ike Pond, or rather perhaps I was concentrating more on the sky than the road.

Completing the 9km to Taisan-ji (太山寺 – 52) in two and a half hours, I arrived at 9 am. The temple has a long hill leading up to it with the temple office at the bottom and the halls at the top. This was a bit confusing since they’re usually together but a driving henro kindly showed me the way.

Prayers quickly finished, I headed to Enmyō-ji (圓明寺 – 53) which is just 3km away along a straight road. I put my bag down near the gate, got out my osame-fuda (name slips) and nōkyōchō (stamp book), and turned around.

I immediately spotted Chen sitting on a bench on the other side of the temple! Since I wasn’t expecting to see her till I was back in Tokyo I couldn’t quite believe my eyes. It was an unforgettably happy moment 🙂

Turns out she’s come back to join me walking till Monday. I feel a bit bad since it’s probably going to be raining most of the time but will be much more bearable together.

We continued walking north until the road hits the coast and got our first view of the Seto Inland Sea (瀬戸内海) that separates Honshū, Shikoku, and Kyūshū. Being with Chen and seeing the watercolour outline of the islands on the horizon suddenly reminded me of home. As much as I’m enjoying this adventure I do miss it.

By 11 am it had begun to rain and we stopped for lunch at the cute Cafe Train (ベイサイドトレイン) overlooking the sea. I had some tasty pizza toast.

After lunch, it was properly pouring but the early morning start paid off since we reached Hōjōsuigun Youth Hostel at 2 pm. Shin, the friendly manager, let us check in early and even had a special machine for drying shoes.

Later in the afternoon we gingerly ventured out to シーパ MAKOTO onsen on the other side of the harbour. It was 500 yen with a discount ticket from the hostel and had a nice outdoor pool overlooking the sea.

Returning to Hōjōsuigun at 6 pm we enjoyed a really good home-cooked meal that Shin had prepared. Desert has frozen tomatoes filled with ice cream; a daring combination which I doubt has often been tried before! I really appreciated (and somewhat envied) just how much it seems Shin enjoys what he does.

The plan tomorrow is to make it to Nankōbō (南光坊 – 55) in Imabari city. All of next week looks wet so I guess the rainy season was begun but I hope there are a few more dry days before the end.