Excuse the lack of updates again, life is squeezing every last drop of energy out of me at the moment – not leaving much time for my simple interests!

With reference to my last post, there’s a lot of cool stuff slowly simmering under the mainstream surface of the web right now. To be honest it’s difficult to know where to start when conceptualising it. Maybe it’s just be the sort of stuff I read but I certainly foresee a technological explosion on the horizon that will rival anything we’ve seen before. The technological revolution as we know it is really gathering pace and shows no sign of slowing!

As seasoned readers will know (contrary to popular belief there are some!) I have an interest in graphic visualisation and in particular map designs. Earlier in the year as part of my final year university project I designed an ‘underground’ map of Durham which worked quite well. Now a student at the London College of Communication has gone and tried to redesign the London Underground map, the father of all such visualisations: 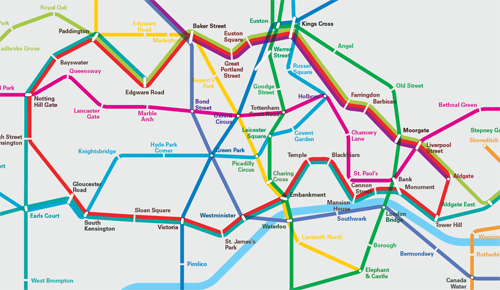 The neat thing about this is that it has been laid out based on time between stations as opposed to quasigeography which the original depicted. To a degree it works but it nowhere near as readable at a glance as its forebear. Another more fundamental issue with any map is that anyone who uses the underground will know that time you spend underground rarely depends on the distance you are traveling!!

Something I’ve long wanted to do is to visit Japan and finally I’m starting to make plans to visit some time around April next year. Of course this isn’t quite as simple as skipping off to Paris as it’s quite literally on the other side of the world! At the moment I’m not sure whether it’s worth finding a tour to go on or to arrange the whole thing myself. Whilst ideally I’d like to do the latter I’m not sure that I’m up to it quite yet due to the language barrier but I don’t want to end up on a tour when I “see” Japan from the window of a stuffy coach. If anyone has any hints or tips I would greatly appreciate them!

To round this mish-mash of conversation off here’s some cool/funny videos to pass a few quiet minutes (I wish), of note is the great matrix spoof and the especially cool IKEA ad (Tip – drag your mouse around!):