The design of the London Underground map has long fascinated me. It’s abandonment of conventional geographic layout was pure genius on the part of its creator, Harry Beck, in 1933 and continues to be the model for which the majority of MRT (Mass Rapid Transit) systems around the world base their maps today.

I’d been looking for an excuse for a while to produce my own ‘underground’ style map using similar principles but never really managed to justify it… until now! Using some possibly rather tenuous reasoning I decided to map Durham (where I live!) as part of my ‘Network Visualisation‘ project that I’m carrying out this year for my course. The preliminary result can be seen below, and I’m pretty pleased with it (click here for a larger version): 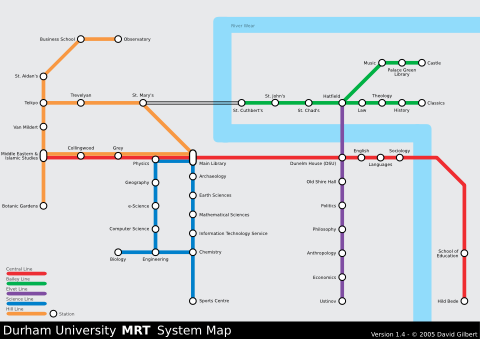 After sketching it out roughly on paper I produced it in a great piece of software called Inkscape which is an Open Source Scalable Vector Graphics (SVG) editor (similar to Illustrator but free!). SVG is a language for describing two-dimensional graphics and graphical applications in XML – the cool thing about it being that you can scale the graphics to any size with zero loss of resolution.

I’ve tried to retain a high-degree of geographical relevance to the map whilst simplifying the details of its layout. Anyone slightly familiar with Durham should be able navigate themselves around (by foot!) using it. Once I’ve done a bit more research I’ll post up a more detailed overview but right now It’s still a work in progress – if you have any comments/suggestions I would greatly appreciate them!

Update (02/03): I’ve just updated the map to version 1.6 (from 1.4). It includes a number of minor improvements which have been made from feedback 🙂