Continuing the theme from earlier in the week, this is what happens when metro construction goes wrong: 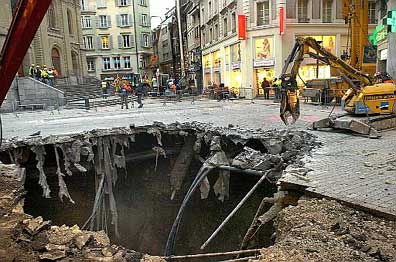 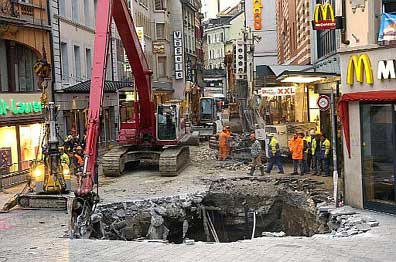 “While building the tunnel for the Lausanne (Switzerland) Metro Line 2 the construction workers discovered water flowing into the tunnel and at 18:00 yesterday evening 50 m3 of rock collapsed – exactly under a McDonalds building in the city center. Also a 10×7 meter part of a big supermarket collapsed 3-5 meters into the new hole underground. Two blocks had to be evacuated (and still are til now) and nobody knows, if the ground will hold or if whole buildings will collapse.”

Reminds me of the time many many years ago when a double decker bus feel through the road outside my school into a disused chalk mine which apparently run under much of Norwich. I seem to vaguely remember much excitement on the day it happened, luckily no one was seriously hurt.

For those of you who are so inclined a new Linux Kernel (2.6.11) was released yesterday. Grab it while its hot!

I should get on with some work now – so much to do, so little time… 🙁