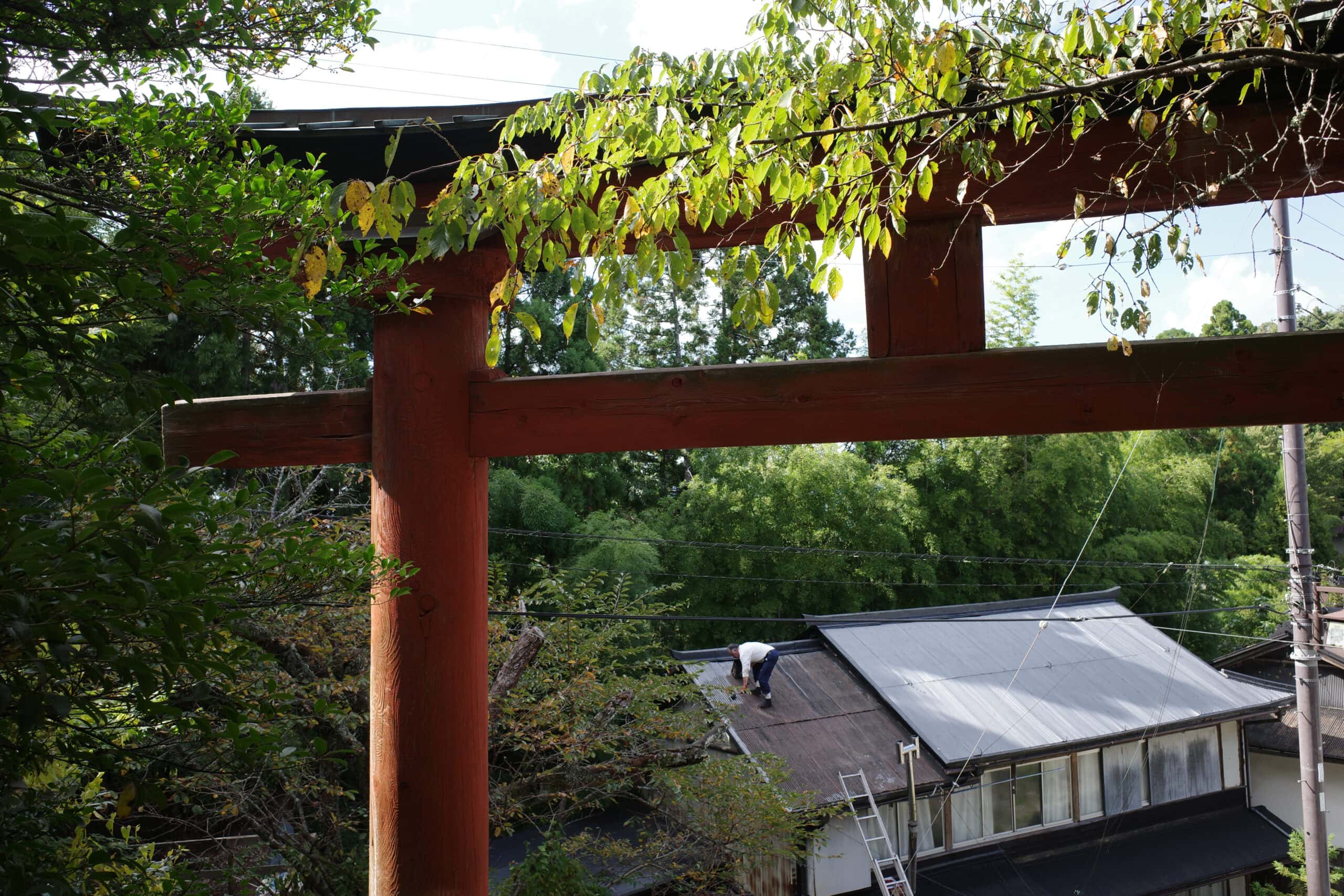 Daybreak saw me whisked on the first train from Kamakura to Yokohama and then the Shinkansen to Kyoto. By 9.45 am I was on the Kintetsu Limited Express heading south, passing Nara before switching to the quaint Blue Symphony tourist train to Yoshino.

Gazing out the window the grey suburbs dissolved into smallholdings with geriatric farmers bent over double in their fields harvesting rice. Numerous stone quarries were like open wounds on the landscape.

At Yoshino (吉野町), I hopped onto the Yoshino Ropeway (吉野ロープウェイ), the oldest surviving aerial lift line in Japan, which shaved a steep 100 meter climb off the beginning of my walk. Perhaps this was cheating but I was keen to make headway.

Yoshino Town is popular with tourists coming to view the cherry blossom during spring and to visit the various shrines and temples which line the road at the head of the pilgrimage trail to Mount Ōmine. Probably owing to covid, it was pretty quiet and many of the restaurants and shops were closed.

Kinpusen-ji (金峯山寺), is one of the most important temples of Shugendō and, whilst its large main hall is currently being restored, I was able to look inside to see the three blue-skinned statues of Zaō Gongen, the protector deity of the sacred mountains in the Yoshino area.

I ate lunch at Yamatoan (矢的庵), a fantastic little soba restaurant where I must have looked a bit out of place with my enormous backpack but was grateful for the delicious “last meal” before the far less appetising camping food I would be having over the next 7 days.

A short distance up the road I stopped at what I correctly guessed would be the last vending machine to fill my two 1-litre bottles up with water (Evian no less!). From here the gradient of the road begins to steadily increase and the weight of my bag with the water began to make its presence felt (about 13 kg total).

Dedicated to mikumari, a female Shinto kami associated with water, fertility and safe birth, Yoshino Mikumari Shrine (吉野水分神社) is a serene spot to pause and catch your breath. It’s design is quite unlike any other shrine I’ve visited before.

The present-day buildings date back to 1605 when Toyotomi Hideyori rebuilt the shrine in dedication to his father Toyotomi Hideyoshi (the samurai who first united all of Japan) who had once prayed here for a son and successor.

The main hall is an unusual structure built in the nagare-zukuri style with an independent building in the kasuga-zukuri style at the centre. The three resulting edifices all lie under the same layered bark roof, which has three dormer gables.

A steep slope leads up the road to Kinpu Shrine (金峯神社) at the bottom of which stands the Shugyo-mon gate (“gate for training”). Practitioners of Shugendō receive instructions and prayers here before beginning their long and arduous journey.

Behind the shrine, the stone steps continue up to a juncture with an old stone signpost carved with the words “To the left, the top of Ominesan”. The adventure was now on!

The path winds its way skywards to Mt. Aonegamine (青根ヶ峰) where you join a road for a short distance before the inexorable climb up Mt. Yonsuniwayama (四寸岩山) begins. While it’s not a huge amount of elevation gain, it’s the first steep ascent and made me pause halfway up to question what I had let myself in for.

I had originally planned on camping at the peak (1,236 m), and indeed there is a nice clear spot where you could do so, but it was inundated by a cloud of pesky flies so since it was only 4 pm I decided to carry on walking.

With the light fading rapidly and the deer eerily screeching warnings to each other, I reached Nizou no Shuku 二蔵宿小屋 (百丁茶屋跡) at 5 pm. There were two men already setting up camp and I quietly found myself a spot near the hut (which was boarded shut).

Hastily heating up my dinner, I managed to spill hot chocolate all over myself which was a pain to clean up but I was soon wrapped up warm in my sleeping bag and ready for some rest. The pitter-patter of pine needles falling on the tent and thoughts of the journey ahead kept me awake so I fitfully dozed most of the night.