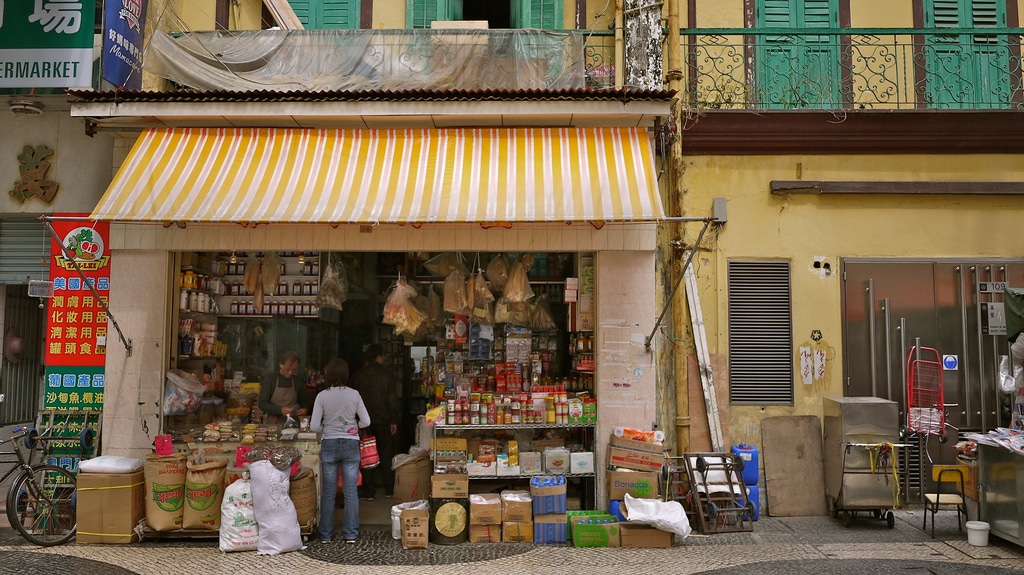 Concluding my four-part photographic walk around the historic centre of Macau (see Parts 1, 2, & 3) today we take a jaunt around some of the old shops which line the labyrinth of streets surrounding Rua dos Mercadores in the south to Rua Nossa Senhora do Amparo in the north.

Many of the old shops in the historic centre of Macau look like they haven’t changed much in decades and judging by the age of the owners it’s probably true.

Since space is so tight and the streets so narrow the main form of transport is electric mopeds which can be found by the dozen parked outside shops everywhere.

Architecturally the buildings in this area of Macau are a curious blend of Chinese and Portuguese styles with European influences clearly shining through the ornate balconies and wooden window shutters.

All of the shops in this area are at the street level below residential apartments selling all manner of items, each seeming to specialise in one particular product, like dried fish (above).

Down some of the side alleys can be found simple street stalls under large awnings selling all sorts of miscellanea.

This particular stall was selling many different types of fake money which is burnt at the graves of people’s ancestors for them to spend in the afterlife. This is normally done during the Qingming festival, also known as the tomb sweeping festival.

I love the rich textures of the decaying buildings here – there’s something mystical about being able to see the peeling layers of history exposed without pretension (or protection for that matter).

Hand-made signs adorn the humble shop fronts with their simple interiors and relaxed atmosphere. In our modern cities, we’ve lost a lot of this to franchised businesses that all look the same – soulless and hard to love.

As I’ve previously written, when you don’t understand the language which surrounds you it can be quite disorienting, but at the same time adds a certain sense of intrigue making you want to explore further.

At this coconut shop, the old man didn’t seem particularly happy at having his photo snapped and quickly scurried into the corner – much better than being shouted at anyway as any photographer will tell.

Looking back down the street a gap where a building has been demolished looks like a missing tooth, being prepared for a filling. I wondered how long these old houses will be able to survive as the demand for land increases.

A sign stripped back to its original state reveals the probably long-forgotten “Wing Wo Long” and some wonderful hand-drawn typography.

Steel shutters line closed shops – whether permanently or just because it was the weekend I don’t know.

Bright flag streamers criss-cross one road, injecting a little more colour into the dulcet tones of the quiet area.

Many small souvenir shops are so crammed full of nick-nacks that there’s hardly any space to walk inside. Goodness knows what treasures may lie within.

Behind one shop I found weaved baskets heaped full of empty washed beer bottles, ready to be reused or recycled.

Alongside were many more cases of Tsingtao beer – reminding me of a trip I took to Qingdao (where it’s brewed) during my first visit to China in 2007 – how time flies.

As I neared the end of my walk I came across another Macanese cat lying lazily against a broom, reminding me of how far I’d walked and how tired my legs were! I made my way back to the ferry terminal and caught the TurboJet back to Hong Kong, satisfied to have found that there was more to Macau than just gambling.