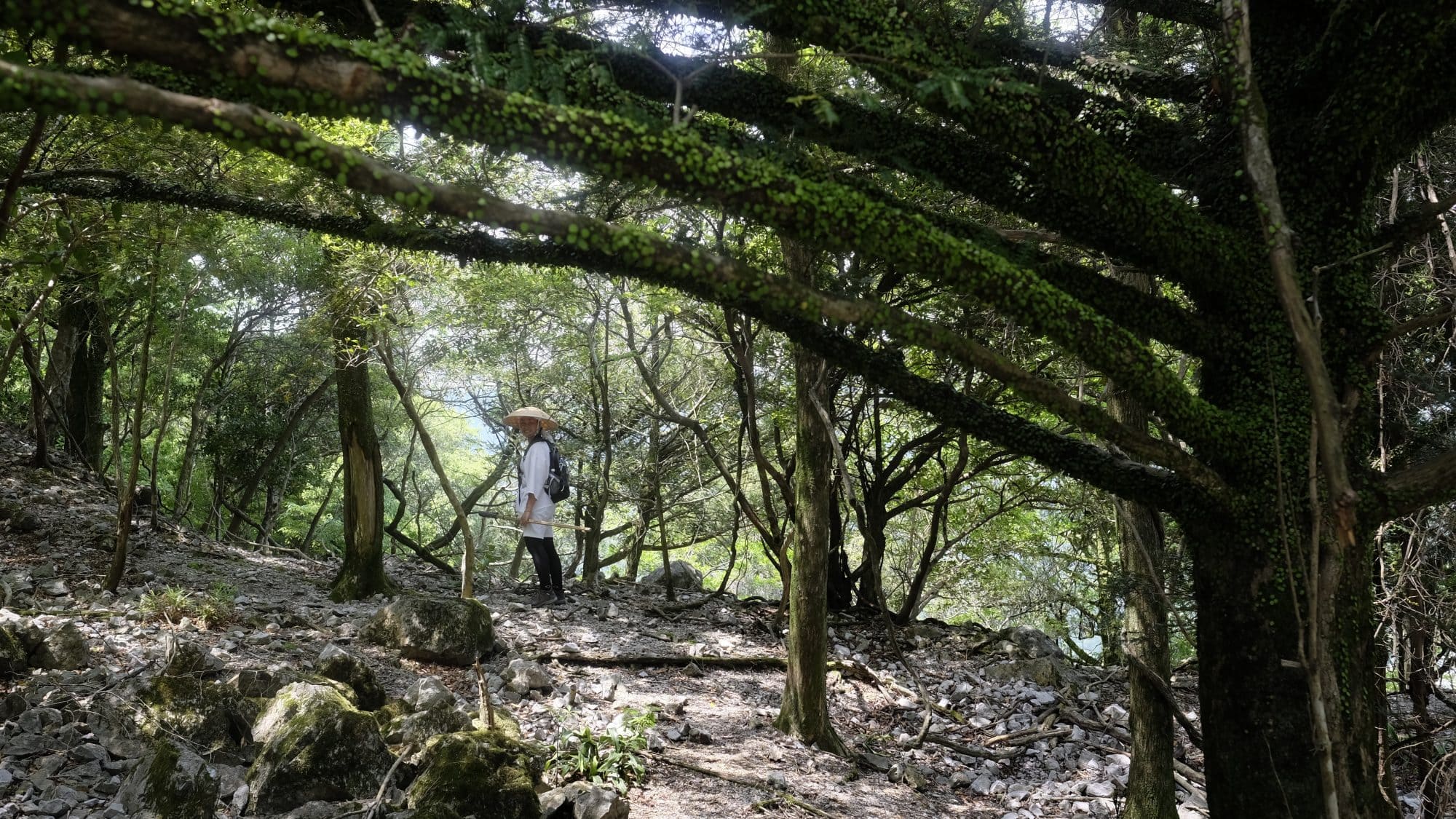 Yesterday after posting my last entry something very fortuitous happened; at around 8.30 pm a woman called Masako turned up at Hosenji and asked for me by name!

It turns out she lives locally and had been following my blog after discovering it on a Facebook henro group. Even more amazingly, she is involved with regenerating the local area and maintaining the henro trail.

She offered to guide me the next day along one of the oldest trails, which has recently been restored after being lost for several decades, to Tairyūji (太竜寺 – 21). There must be something in the air or water in Shikoku which makes people so kind!

In order to make it to our meeting point at a reasonable hour, I woke at 5 am this morning and hit the trail by 6 am. The day ahead would involve climbing two relatively steep mountains and then a final smaller one before reaching Byōdō-ji (平等寺 – 22).

After trekking through Katsuura Town I began the steep ascent towards Kakurin-ji (鶴林寺 – 20). Part way up I came across a great thatched henro hut which would be large enough to sleep two if during the summer.

Further up a beautiful view opened up over the winding Naka River which looked amazing in the early morning light.

At a height of 500 meters, I reached Kakurin-ji at around 8.30 am and enjoyed exploring the temple grounds before getting my book stamped.

I almost took the wrong path back down the mountain but sensing something was wrong asked one of the temple staff for directions who set me right. It was another breathtaking descent through bamboo forests and pastoral fields with perfect weather to boot.

I met Masako at the bottom and we drove in her car a short distance to the beginning of the lesser-know Kamo-michi (かも道) trail which apparently dates back over 1000 years.

David Moreton, the editor of the English map, has written an interesting article about it with much more info. I also found this map to be quite useful.

The 5km trail is completely natural underfoot the entire way up (i.e. no concrete) and ascends through bamboo and cedar trees. It’s fairly steep, to begin with, but soon levels off.

Along the way, Masako pointed out 14th-century stone path markers which had been recovered from the undergrowth. The one above was placed there in 1365, earlier than any other path marker in Shikoku.

She also took me to an unmarked lookout point which provided great views over Anan City.

These plants are used as garnishes in Japanese cooking and smell a bit like mint.

Amongst many somewhat dubious legends associated with Kōbō-Daishi, including that he once flew between temples 20 and 21, you can find an enormous rock on the route which he is said to have stopped from hitting him with his bare hands.

We arrived at Tairyūji around 12.30 and set on a mountaintop amid the enormous trees it’s one of the most stunning I’ve seen yet. Its buildings are constructed in a similar way to those at Kōya-san which I visited last year.

After carrying out the usual rituals we began the descent along first Iwaya-michi (いわや道) and then Byōdō-ji-michi (平等寺道) which provides a far more scenic route down than the road which most people follow. Early on is another great viewpoint with a massive statue of Kūkai.

After descending the 5km trail we reached the point where Masako had parked her personal car (her work one was back at the start). Since I was headed on to Byōdō-ji where I had booked a minshuku to stay the night she very generously offered to drive my heavy backpack the final 5km so I could walk the rest in a little more comfort.

On the final leg, I passed another amazingly designed henro hut shaped like a daikon radish. All these amazing huts I’ve been seeing were built by a single group with their design supposed to express something significant about the area.

I made it to Byōdō-ji by 4.45 pm just in time to get my book stamped before the temple office closed. It had been a wonderful day for which I will always be truly thankful to Masako for. I also set my personal best distance of 30km in one day.