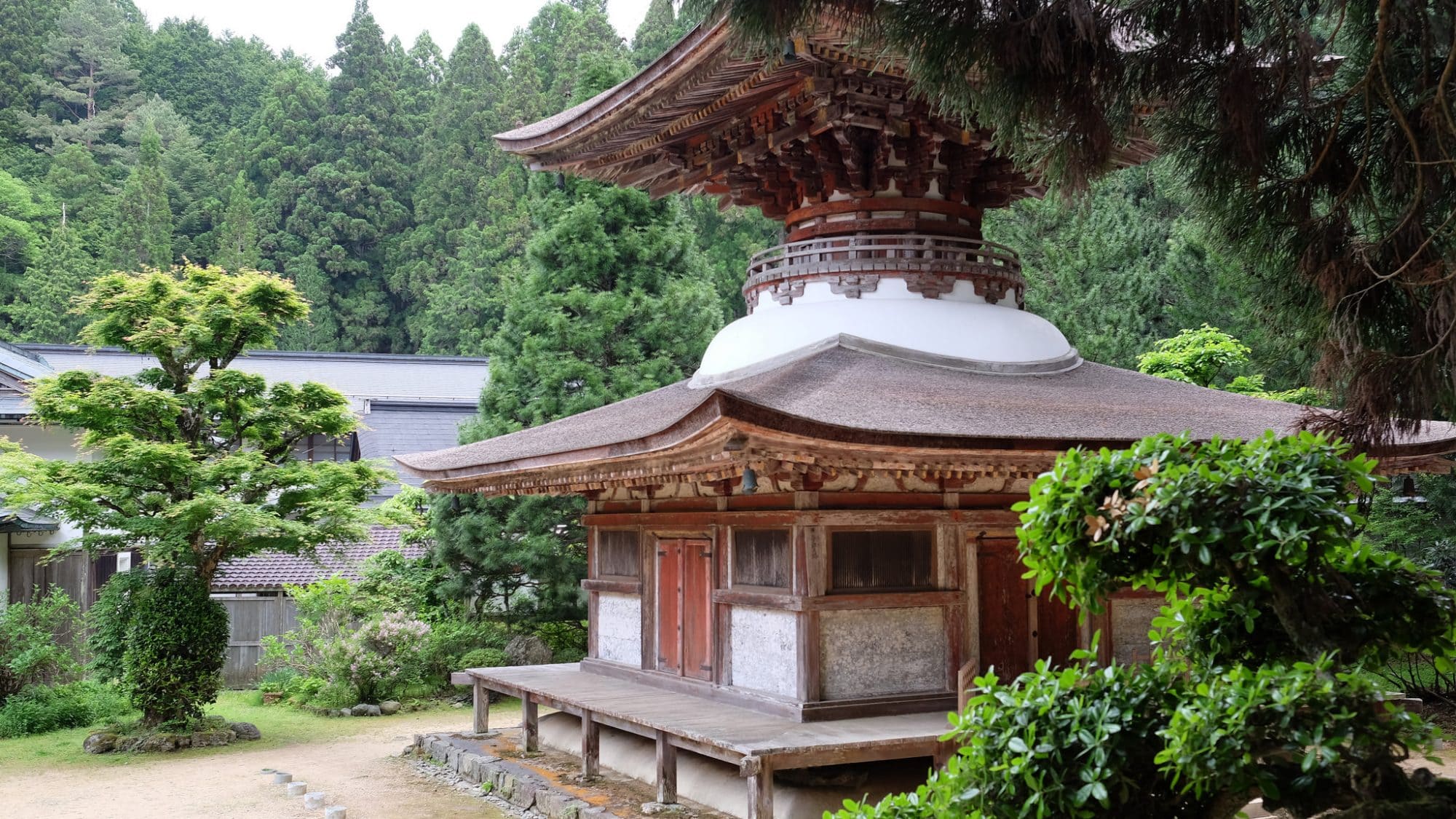 Around 1.5 hours by train from Osaka, Mount Kōya (高野山) is located in an 800m high valley amid the eight peaks of the mountain and is home to the Kōyasan Shingon sect of Japanese Buddhism. The original monastery has grown into the town of Kōya, featuring a university dedicated to religious studies and 120 temples, many of which offer lodging to pilgrims.

After taking the train from Namba Station (難波駅) to Gokurakubashi Station (極楽橋駅) at the base of the mountain, a cable car then takes you the final 5 minutes through the lush green forest to the top. From here it’s a short bus ride into the town centre where almost everything is accessible by foot.

The courtyard at Fugen-in (壇上伽藍), a temple near the centre of the town, contains a beautifully manicured tree held in position by wooden poles.

The tree seems to have been burnt – whether on purpose to promote growth or by accident I’m not sure. If anyone knows please leave a comment below!

Followed up a little later by some traditional Japanese confectionary at Kasakuni (かさ国).

A cute collection of animal ornaments outside someone’s house.

At the ‘minor’ temple complex of Kongō Sanmai-in (金剛三昧院) we came across a two-storied tahōtō (多宝塔) built in 1223 to honour the son of a shogun who was assassinated.

The temple houses a hibutsu (“secret Buddha”) statue which is hidden and displayed for only one day every five hundred years. It will next be on display in the late 2400s!

A groundsman carefully pruned the trees from a makeshift scaffold.

To one side of the main hall is a heavenly garden.

Kongōbu-ji (金剛峯寺) is the head temple of Shingon Buddhism and inside are rooms lined with exquisitely painted sliding doors. To the rear is a large rock garden.

The Danjo Garan (壇上伽藍) is a leafy temple complex housing about twenty temples.

Sano-in is one of the serene sub-temples in the area.

The vivid vermilion Konpon Daitō (根本大塔) pagoda towers over all other buildings in the complex. It was last rebuilt in the 1930s, having been destroyed multiple times by fire.

Signs adorn the trees warning people not to smoke or start fires.

To round off the day we followed a 2km section of one of the pilgrim trails from the large Daimon Gate to Nyonindo, a hall that used to cater to female visitors who were banned from entering the temple town before 1872.

The rather alarming “Beware of Bears” sign put us on edge but fortunately, we didn’t bump into any of the furry friends!