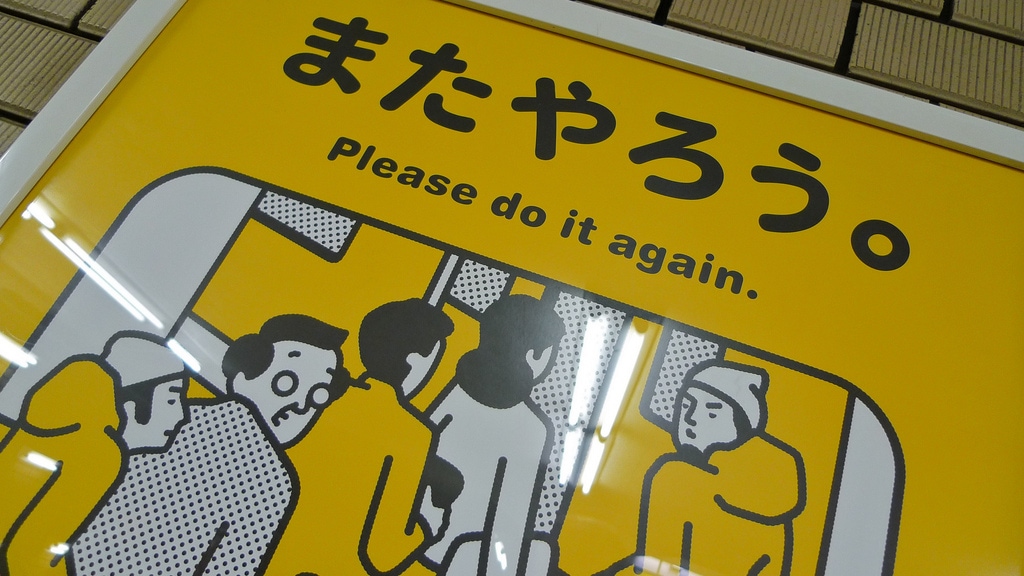 Tokyo’s transportation network is as staggeringly efficient as it is complex. I don’t think I ever had to wait more than a minute or two for a train to arrive and while it sometimes gets crowded at rush hour it wasn’t too uncomfortable since everyone is so polite.

There are both underground and overground networks which are separately run but accept the same payment systems (Pasmo / Suica) and many of the stations overlap. Most of the main sights are easily accessible from the circular Yamanote line which you can use with your JR Pass if you have one.

Clean, orderly, quiet – like everything around here. Some trains have separate carriages for women which you’ll want to avoid if you’re not of the fairer sex!

At many stations you’ll spot amusing posters telling you how to behave, although at a glance you may be left scratching your head with the somewhat cryptic “please do it again” messages.

On this particular day, it was raining so I decided to head for the Edo-Tokyo Museum (江戸東京博物館) which chronicles the history of Tokyo and is a 5-minute walk from Ryōgoku Station.

Next to many stations under the tracks, you’ll often find an assortment of small restaurants which offer cheap meals like the soba noodles and chicken broth I had here. If you’re on a budget having your main meal at lunchtime instead of in the evening can save you a lot.

My next stop after the museum was Akihabara Electric Town (アキバ) which is a major shopping area for electronic, computer, anime, and gaming goods. In recent years it has emerged as a centre of Japanese popular culture with all sorts of weird and wonderful sights on offer.

Perhaps it was just the rain or my being tired out but I think the area would have interested me more a few years ago than it does now. There was something about all the bright lights, noise and confined spaces which was grating me that day.

The Japanese do seem to have a strange obsession with large-eyed girls dressed up as maids in both real and comic form (or  2D / 3D as they say) and the area has many ‘maid cafes‘ (メイドカフェ) where all the staff are in costume/cosplay. It’s an interesting cultural quirk but seems a bit on the perverse side to me.

Another type of cafe I spotted features real cats which you can play with while enjoying a cup of tea! Only in Japan 😀

You’ll also find many pachinko parlours full of people sitting in rows fixated on the brightly coloured pinball machines, no doubt with more than a few addicts among them.