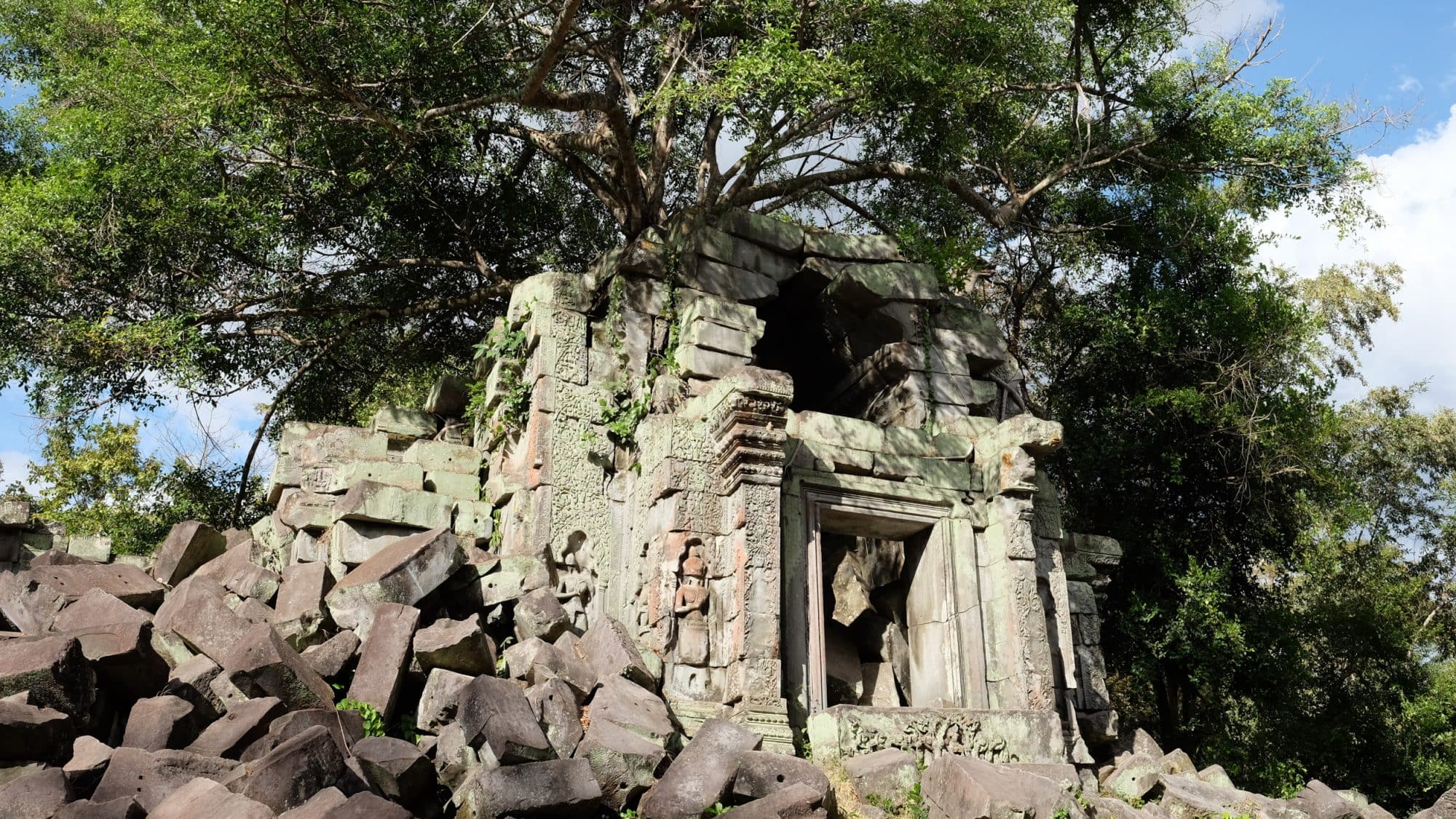 After spending the morning at Koh Ker we jumped back in the car and hit the road bound for Siem Reap. About 40 km east of Angkor Wat we stopped at Beng Mealea (ប្រាសាទបឹងមាលា), another ruined temple that’s about as Indiana Jones-esque as you can imagine.

Oriented toward the east, but with entrances on all four sides, Beng Mealea is approached from the south by way of a dusty causeway with long balustrades on either side formed by the bodies of the seven-headed Naga serpent.

The main entrance is blocked by an enormous pile of stone blocks which lead up to the apex of the arch. It was clear that a fun scramble lay ahead.

Looking back from the top of the arch to the collapsed platform at the end of the causeway.

The history of the temple is unknown and it can be dated only by its architectural style, identical to Angkor Wat, so scholars assumed it was built in the early 12th century.

The basic layout is three enclosing galleries around a central sanctuary. Many of the structures have collapsed, leaving giant heaps of stones, with trees and thick brush thriving amidst its towers and courtyards.

A number of semi-official-looking wardens seemed to be hanging around to help guide people and stop anyone from accidentally killing themselves.

Hidden away among the rubble and foliage are several impressive carvings depicting scenes from Hindu mythology and Buddhist motifs.

While there is a wooden walkway leading to the central tower we decided to take the Choose Your Own Adventure route over piles of broken masonry, through long dark chambers and between hanging vines!

I had pretty much reverted to my 12-year-old self at this point.

The temple was built mostly of sandstone and, since Beng Mealea is only 7 km far from the Angkorian quarries of Phnom Kulen, it’s presumed that the blocks were transported along artificial water canals.

The enormous scale of the ruins is overwhelming.

Raised structures known as libraries (their true purpose remains unknown) lie to the right and left of the avenue that leads in from the east.

Only the solitary feet of this, presumably looted, statue remain.

Visiting Beng Mealea was the perfect ending to our two-day trip to northern Cambodia and I’d highly recommend the same route to anyone who wants to experience the wondrous Khmer temples away from the crowds of Angkor Wat.