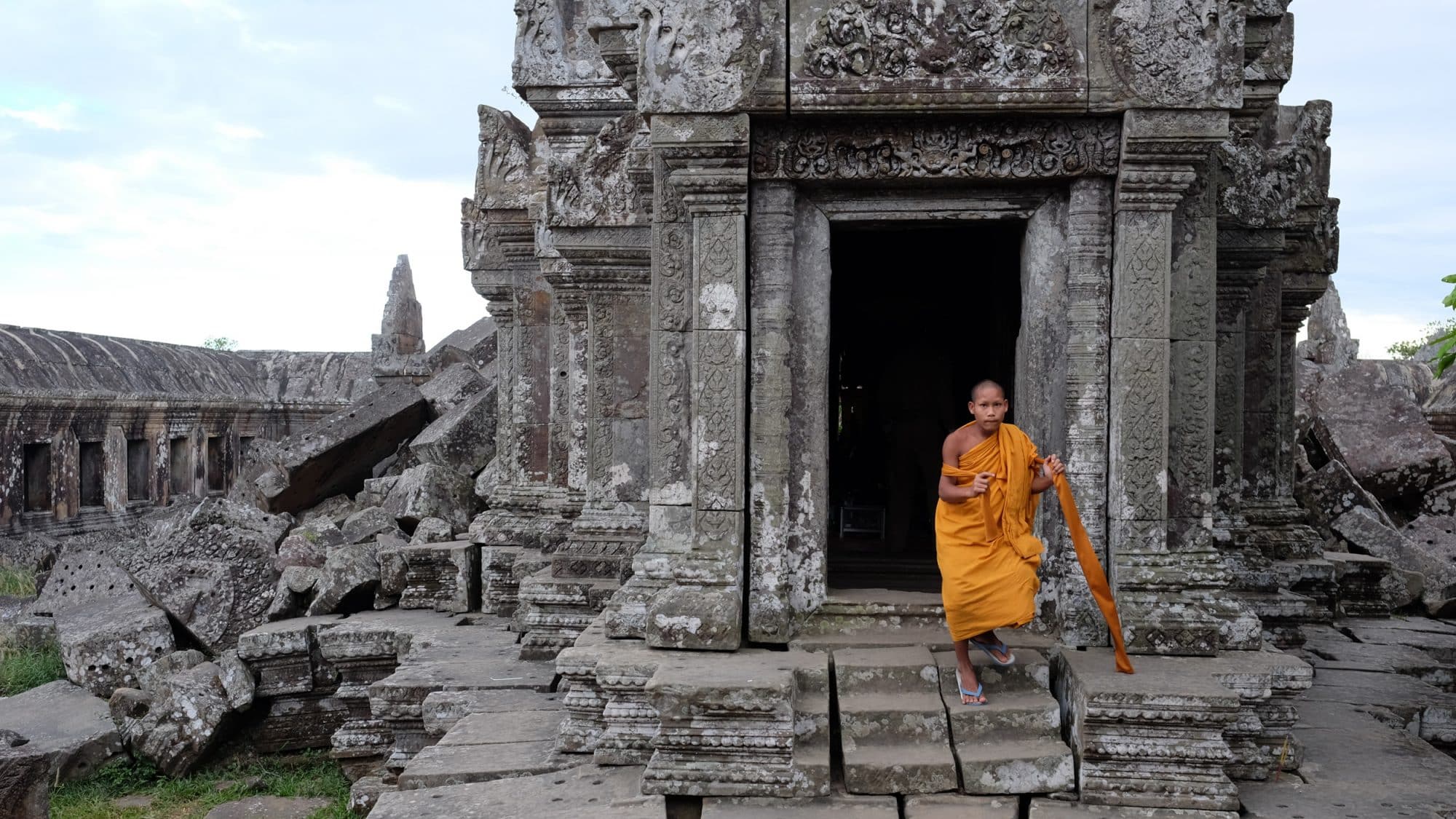 By far the best thing we did during our trip to Cambodia was to hire a driver for two days to visit some of the remote temples in the northwest of the country. The circular route we took was as follows:

Our driver, a friendly guy named Sophea, picked us up from our guest house early in the morning and we drove around 5 hours north over dusty roads to the border between Cambodia and Thailand.

Here, situated atop a 1,700 ft cliff in the Dângrêk Mountains, lies the ancient Hindu temple of Prasat Preah Vihear (ប្រាសាទព្រះវិហារ). Affording a view for many kilometres across a plain, Preah Vihear has arguably the most spectacular setting of all the temples built during the six-centuries-long Khmer Empire.

Due to an ongoing dispute between Cambodia and Thailand over land ownership, both sides maintain heavily armed paramilitary police facing each other near the temple. While the situation is currently calm, passports are checked and Thai citizens are denied access.

Upon arriving at the base of the mountains you need to switch to either a pickup truck ($25) or a motorbike ($5) to reach the temple. Neither option is for the faint of heart since the road is very steep and turns into a dirt track halfway up. Having made the choice to take a motorbike, my confidence was not inspired by the driver who was missing his nose and one ear!

Arriving in late afternoon we were the last visitors and had the whole site to ourselves.

The sprawling temple complex runs 800 m along a north-south axis facing the plains to the north, from which it is now cut off by the international border. It consists of a causeway and steps rising up the hill towards the sanctuary, which sits on the clifftop at the southern end of the complex.

The approach to the sanctuary is punctuated by five gopuras (entrance buildings) with galleries and other structures on either side.

As we reached the main sanctuary a young Buddhist monk appeared from within the crumbling temple. His vibrant saffron and ochre robes created a wonderful contrast against the grey stones. The photo above is my favourite from the whole trip.

Construction of the first temple on the site began in the early 9th century, however, the earliest surviving parts of the temple date from the Koh Ker period in the early 10th century. It was dedicated to the Hindu god Shiva.

Whilst most of the ceilings have collapsed, the vaulted galleries surrounding the main sanctuary remain intact.

The climb to the top of the 2,000-foot-high escarpment is rewarded by a spectacular view overlooking the Cambodian plains far below. It was dusk by the time we arrived and the photos don’t do justice to just how much of an awe-inspiring and humbling experience it was.

Despite the tranquillity, bullet-riddled walls and signs were a reminder of the dormant conflict.

The sun was setting as we began our descent from the mountain, marking the end of an exhilarating day.