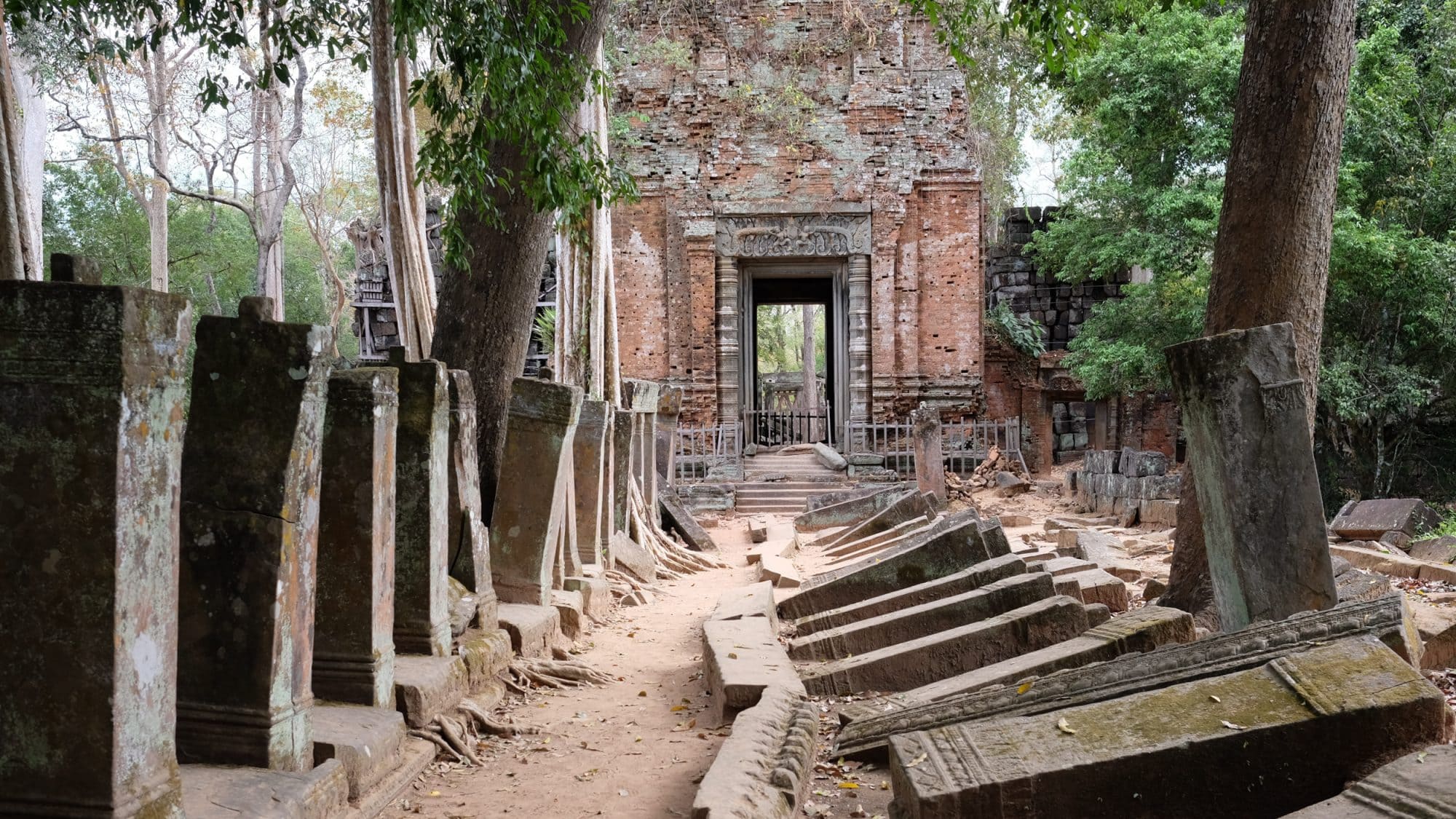 On day two of our trip into northern Cambodia we set off early from the hotel. Owned by the family of a military commander it was situated in the middle of nowhere but, despite looking brand new, nobody else seemed to be staying there.

Abandoned for a millennium to the jungle, Koh Ker (ប្រាសាទកោះកេរ្ដិ៍) was briefly capital of the Angkorian empire from AD 928 to 944 and was one of Cambodia’s most remote and inaccessible temple complexes.

Under the reign of king Jayavarman IV an ambitious building program was undertaken. This included an enormous water tank and about forty temples, the most significant of which contains a double sanctuary (Prasat Thom/Prang) and follows a linear plan.

Upon arrival, after passing some small restaurants, you reach the impressive entrance pavilion made of sandstone. It has a cruciform ground plan and parallel to the cross-bar are two halls. Directly behind the entrance pavilion are the ruins of two huge laterite towers.

Large harnesses made of wood and wrapped in steel cabling seem to be the only thing stopping their complete collapse.

Behind the ruins of the entrance pavilion and the laterite towers is an impressive red brick tower, called Prasat Krahom (krahom = red), which provides entrance to the eastern court. It once housed a statue of the Dancing Shiva with five heads and ten arms.

Lined by trees the moat in the eastern court borders the Prasat Thom. A dam with Naga-balustrades crosses the moat. One side of the moat has been cleared of vegetation by local villagers but the other remains overgrown.

The complex inside the moat consists of the ruins of two inner walls, many rectangular structures, 21 brick towers, two libraries, and a central sanctuary, all in a bad condition.

A great variety of wonderful statues were chiselled but because of its remoteness, the site of Koh Ker was plundered many times by looters. Today some of them are now in museums in France and Phnom Penh.

In the western court stands a huge seven‑tiered pyramid (36 m tall) called Prang which was probably the state temple of Jayavarman IV. Inscriptions say that originally a huge linga (symbol of the Hindu god Shiva) stood more than four meters high on the platform at the top.

A group of monks joined us at the top as we enjoyed the view over the lonely forest with the distant Dângrêk Mountains (where we had been the prior day) to the north and the Koulen Mountain Range to the south.

Wandering through the eerily quiet site it was staggering to imagine that a thousand years ago where we were standing was a vibrant city home to more than 10,000 people. I couldn’t help but wonder if/when the modern cities we live in today will meet the same fate…