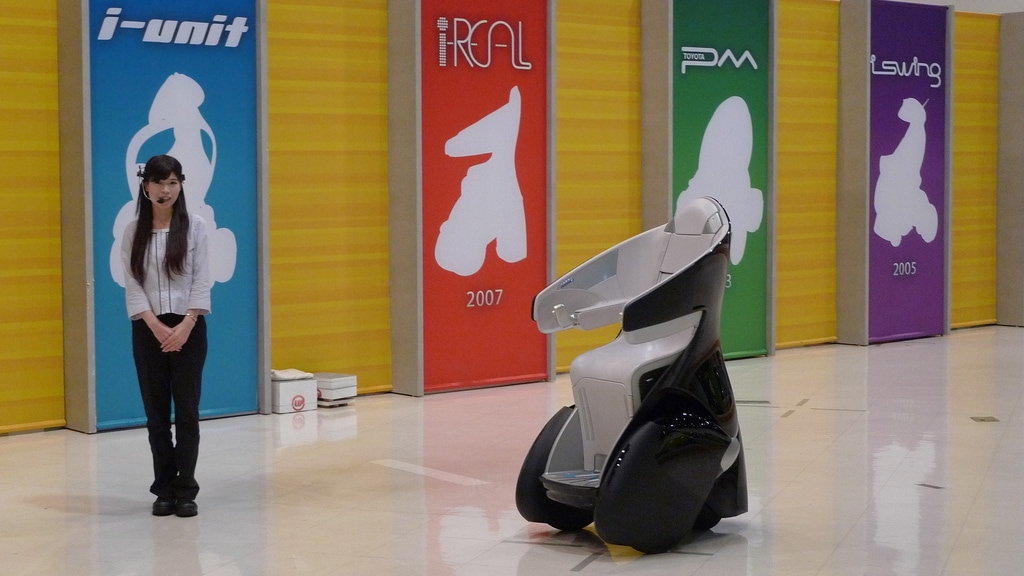 Tokyo is often portrayed as a high-tech wonderland being run by robots and full of futuristic gadgets you can’t find anywhere else. While the truth is rather more mundane it can certainly be said that Japan is a leader in the field of robotics and a few concepts are on show at Toyota’s MEGA WEB Universal Design Showcase on Odaiba island in Tokyo Bay.

To get to MEGA WEB take the automated Yurikamome train from Shimbash (新橋駅) on the mainland to Aomi Station (青海駅) which is directly connected to Palette Town where the exhibition is. It’s open 11 am – 7 pm daily.

I visited early on a weekday when there was hardly anyone else there except some foreign businessmen from Toyota on an official tour which I tagged along behind. This turned out to be a lucky move since otherwise I would have missed many of the demonstrations. First up was a humanoid “partner robot” which could fairly convincingly play the trumpet (see video below).

It has artificial lungs, lips and fingers which allow for a natural, if pre-programmed, performance. The way its limbs moved was creepily human although seeing a guy walk out of a control booth at the back rather dispelled the illusion! Toyota hopes that similar robots can be used to assist elderly and disabled people – an acute problem in Japan with its shrinking and aging population.

In science fiction and anime you often see fictional bipedal vehicles known as ‘mecha‘ that approximate the shape of a human who sits inside to pilot them (think Aliens or Matrix Revolutions). The i-Foot is about as close as you’ll get to seeing the real thing and while it isn’t quite as cool the 7 ft. high, two-legged, walking machine can even climb stairs. Unfortunately with a top speed of only 1 mph don’t expect it to replace the bullet train anytime soon.

The real star of the show was the i-Real ‘Personal Mobility Concept’ which is a 3-wheeled battery-powered one-passenger vehicle – you might remember it from an episode of Top Gear last year. Check out the video below to see it and other Toyota robots in action:

In low-speed mode, the vehicle is upright and moves around at a walking pace among pedestrians, without taking up a large amount of space. In high-speed mode it extends in length by leaning back and extending the single rear wheel to improve aerodynamics and stability, thus being able to achieve a speed of 18.6 mph. It leans into corners to prevent it from tipping over.

At the end of the demo, both the presenter and the i-Real gave a cute little bow but it remains to be seen whether something like this will ever catch on in the real world or end up as a niche product like the Segway. Nissan has developed a slightly larger two-person New Mobility Concept vehicle which goes a lot faster.

Not included in the exhibition but worth a mention is the HRP-4C, a walking, talking humanoid fashion model fembot developed by Japan’s National Institute of Advanced Industrial Science and Technology (AIST). Those hands are the things nightmares are made of!