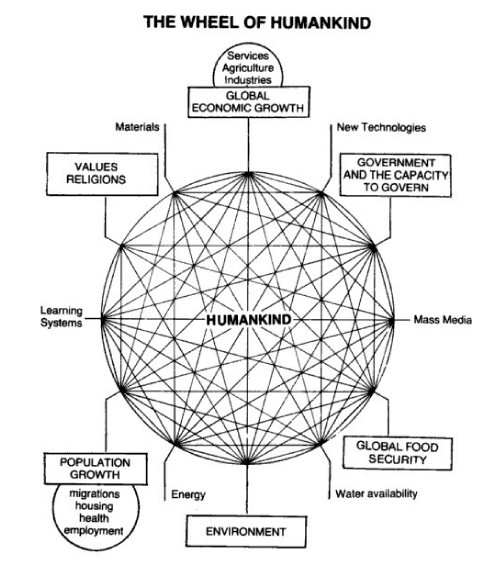 I came across this fascinating diagram in a 1991 report titled ‘The First Global Revolution‘ from the Club of Rome which is a globalist think tank that deals with a variety of international issues.

It’s a neat way of visualising the major forces which are at work in our world and how they are all closely connected. Whilst being nearly 20 years old and slightly outdated much of what’s contained in the report is painfully relevant and pertinent to the challenges we are now collectively facing as humankind. Here are a few select quotes:

Today’s approach to social life is superficial, based on current events and crisis government which attempts to eliminate symptoms without diagnosing the causes of problems. This is the way we are setting the scene for the destruction of our planet.

The growing complexity of the world and of its problems makes it necessary to have a complete grasp on tremendous amounts of information before coming to a decision… A dynamic world needs an effective nervous system at the grassroots level, not only ensure the widest range of inputs, but also to make the identification of every citizen with the common process of governance possible.

In searching for a common enemy against whom we can unite, we came up with the idea that pollution, the threat of global warming, water shortages, famine and the like, would fit the bill. In their totality and their interactions these phenomena do constitute a common threat which must be confronted by everyone together… All these dangers are caused by human intervention in natural processes, and it is only through changed attitudes and behaviour that they can be overcome. The real enemy then is humanity itself.

For anyone concerned with the future it makes fascinating and equally disturbing reading. Aside from the issues of climate change and world governance what interests me most is that 20 years later the world does indeed now have a global nervous system which is capable of processing vast amounts of information; you’re using it right now. More than any other technology the internet is enabling humankind to do things our forebears could only have ever dreamed of and if we are to combat the issues we are now facing it will undoubtedly play a major role.

While the internet has narrowed the distances between people, places, and information it has not yet facilitated a deeper understanding between them (and in some cases has even amplified tensions). Culture is far deeper than what the eye can see and the uncomfortable truth is that most of us are fairly ignorant of our global neighbours – even the well-educated and travelled. The question then becomes how do we harness this vast collective consciousness to find solutions to the world’s problems and bridge the massive divides between cultures which cause so much strife?

There are no easy answers to this question but here are just a few ways the internet is and will help:

To address the fundamental issues will require letting go of thousands of years of pre-conceptions which won’t happen overnight but I don’t think it’s outside the realm of human possibility if we can put aside some of our selfishness and stereotypes. Sadly this is unlikely to happen till the death toll is in the millions as the majority will have no interest in doing anything until the point when the issues begin to affect them personally (perversely this might solve the overpopulation issue).

As the ongoing Google vs China debacle proves, the internet is at odds with the old ideas of sovereign borders and regional laws. Quite how both will reconcile with each other in the coming years is unclear but still goes to show the disruptive power people can have when brought together on a shared platform free (mostly) of the usual rules and boundaries. The internet is likely to be the true battleground for the first global revolution which will have direct implications for the survival (or otherwise) of the human race as we know it. Keeping it free and open will be the first challenge.

Another more recent report titled “Mapping the Global Future” from the National Intelligence Council also makes interesting reading with some interesting possible scenarios for the implications of globalization mapped out and examines what an Asian face on globalization might look like (influenced mainly by China / India).

How do you think the internet could be used to help solve the world’s problems?