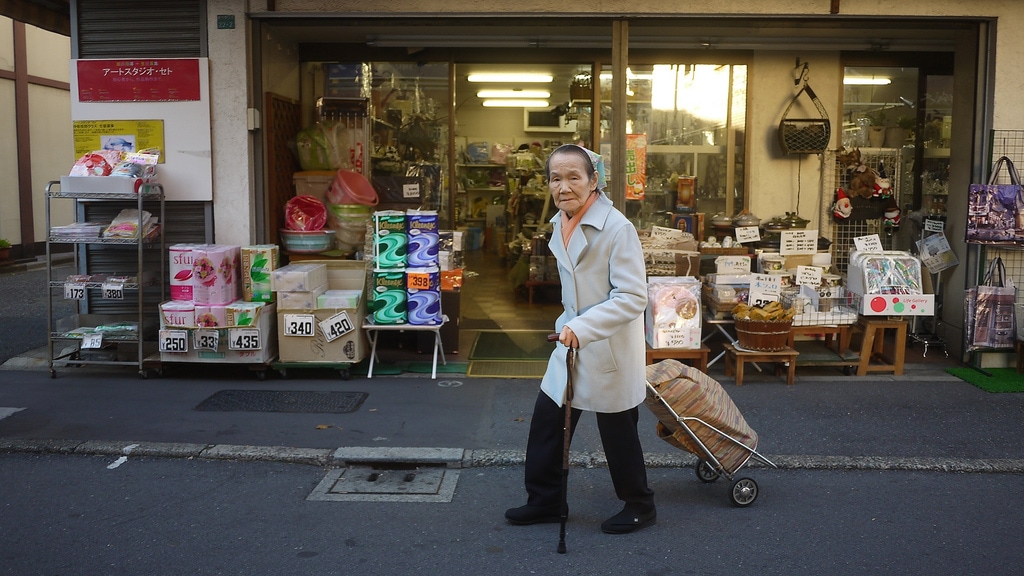 While Harajuku and Shibuya are squarely aimed at the younger generations in Tokyo, it’s easy to forget that Japan has an ageing population with more than 20% of people being over the age of 65. So where do all these older folk go to shop? One popular place is Sugamo (巣鴨), otherwise known as “Grandma’s Harajuku”.

Close to the JR station you’ll find Jizō-dōri (地蔵通) shopping street which is where all the slow-paced action happens in the 200 or so shops which cater to the elderly.

The atmosphere is like stepping back 40 years into a bygone Tokyo when life was simpler and clothes were hand-knitted.

Along the street, you will find all manner of shops selling traditional snacks, health remedies, clothing, umbrellas, and random knick-knacks.

Elderly people in Japan seem to be a little more friendly than the ajumma in Korea who will physically assault anyone crossing their path.

Like the Brits, the Japanese love their umbrellas but theirs tend to be a lot more colourful!

At every street corner signs sensibly point out the nearest Automated External Defibrillator (AED) machines for emergency use.

I got the evil eye from this suspicious florist.

There are two shrines in the area including Koganji Temple where washing a statue of Buddha is supposed to cure illnesses.

Another piece of history can also be found passing through Sugamo by way of the Toden Arakawa (都電荒川線) streetcar line.

Opened in 1913, it was originally part of an extensive tramline network, but today only runs between Waseda and Minowabashi.

In this small but well-stocked second-hand bookshop I found an original copy of Sputnik Sweetheart by my favourite author Haruki Murakami.

At the traditional cake shops, the most popular item is the shio-daifuku (大福餅) – a salty rice ball with a sweet red bean paste at the centre.

Sugamo is easily reached on the JR Yamanote line, heading north from Shinjuku, and makes for an interesting break from Tokyo’s usual pace.