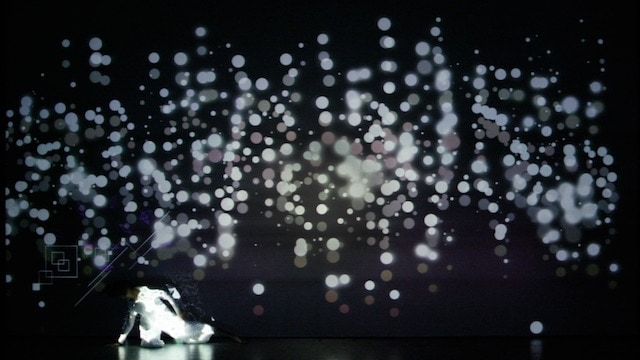 Japanese artists seem to have become extremely adept at combining motion graphics, projection, and live-action choreographed dance into some mesmerising acts which caught my attention over the last year. Below are four of the best.

The official video for electronic musician Nosaj Thing’s latest single “Eclipse/Blue” is a beautifully stylized dance performance inspired by a solar eclipse, but also a unique technological feat. The video was created by technology artist Daito Manabe, and stars two dancers, one in front of the screen and the other behind.

The live performance was choreographed, designed, and performed using a Point Grey high-speed camera to track the dancers’ movements and project the effects onto their bodies, with no effects added in post-production.

This new piece symbolizes primitive organisms, microbes and viruses we express the dynamics of their lives that to them are seemingly without meaning.

The performers of Enra are highly talented martial artists, jugglers and dancers, each demonstrates their own specialty in the works that we make. The final video is simply achieved by projecting the video onto a screen via projector.

The group perform to in synchronization with the graphics maintaining the position of their bodies and perfecting this through repeated practice.

Wrecking Crew Orchestra is an eight-man team from Japan who don wireless light suits straight out of the movie Tron, which were custom-designed by lighting-tech company, iLuminate. While performing in the suits on a pitch-black stage, the dancers appear to, well, disappear every time the lights on their suits stutter. This allows the group to pull off some precisely timed sequences that seem impossible.

When all eight members of the crew are spread out across the stage in darkness and their suits light up in a ripple effect, the result is a stop-motion flipbook come to life, with a pulverizing dubstep soundtrack. At other times, one of the crew will have his suit turned off and help another member who is lit up do flips in slow motion, giving the illusion of manipulated gravity.

Founded in 2000, Perfume evolved from a typical J-pop girl group, with all the elements—perfect looks, choreographed dances, ultra catchy tunes—into a punchy, futuristic mega pop act that incorporates cutting-edge technology into every aspect of their music and image. Their distinctive sound, like a dreamy, vocalized version of Daft Punk, can be attributed to Japanese electronic music wizard Yasutaka Nakata (of Capsule), who has produced their music since 2003.