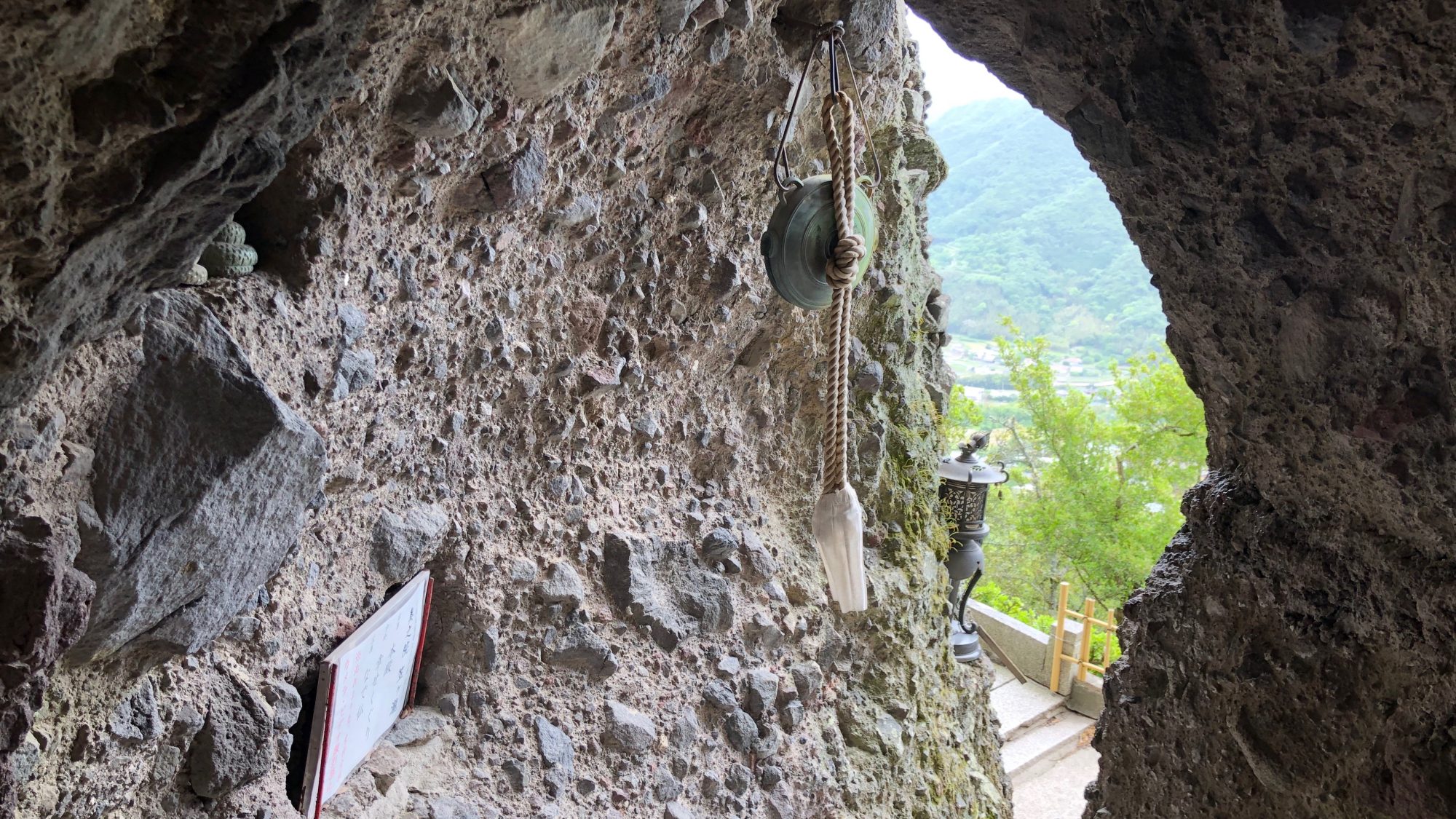 I woke early on Monday morning, my mind immediately turning to the weather which appeared much the same as it had the evening before – ominous dark clouds looming on the horizon, but no rain yet.

After breakfast with a bunch of gluttonous geriatrics on a tour bus holiday (the way they were attacking the buffet it seemed like they hadn’t eaten in a month), I set off from the Green Plaza Hotel at around 7.30 am.

The trail began by following the main road north, before dipping into a sleepy village.

At the first temple which provided stamps, there was nobody to be seen but they were laid out for self-service. My kanji comprehension is terrible so it took me a while to figure out the correct page for each stamp! I left the appropriate amount of money on a tray provided.

Nearing the north-west corner of the island, the trail veers inland, heading toward the centre of the island. This was the first proper off-road section of the trail, and just as I entered it, a young wild boar darted across the path in front of me. Wild boar usually steer clear of humans but will attack if they feel threatened and I wasn’t about to hang around to meet its mum!

By now the wind was rapidly turning into a gale and I was getting a little concerned about crossing the ridgeline up ahead.

As if long-forgotten souls were crying out, the ferocious winds made the bamboo trees sing as they swayed and cracked, their hollow interiors acting as unaccompanied instruments. What would early humans have made of this I wondered?

After visiting Takinomiya-do (滝ノ宮堂 – 71), the trail steeply rises to a ridgeline where the wind violently buffeted me as I traversed it heading east towards the okunoin (upper hall) of Ryoukou-ji (滝湖寺 – 72). It was rather dangerous but luckily the wind was blowing away from the exposed edge.

Ryoukou-ji Okunoin Kasagataki (滝湖寺奥之院 笠ヶ滝 – 72) sits precariously at the top of the valley cliff face, its main building perched on a knife-edge which can only be reached by means of metal chains anchored into the rock.

To access the building one must enter through a winding tunnel burrowed into the rock. It’s a unique experience and not one for the faint of heart.

A steep staircase takes you down to the main hall of Ryoukou-ji (滝湖寺 – 72) where nobody appeared to be on duty again so I stamped my own book.

Walking through the valley back towards the coast, I could see dark clouds ahead and what appeared to be rain. In the mountains, the weather seems to be extremely localized so weather apps are rather useless. Miraculously, I managed to dodge the worst of the bad weather all day.

While the aim of the pilgrimage is to visit all 88 Buddhist temples, the Shinto shrines which dot the landscape always seem to be the most beautiful to my eyes. Unadorned without paint or decoration, the wooden gates and buildings seem to harmonize with the landscape better than their wealthier cousins.

At Konngou-ji (金剛寺 – 76) I met a lovely old gentleman who was stationed there serving tea and sweets to passing pilgrims. I applaud his dedication since I imagine I was the only one crazy enough to be outside in this weather!

Walking along the northern coast it was past 1 pm and I was feeling peckish so I stopped beside Unko-an (雲胡庵 – 78) to make myself a sandwich. It’s amazing how something so simple can taste so great when you’re hungry!

Sitting on the veranda of the temple I waited for a light shower to pass, watching the water trickle down chains which hung from each corner of the building. These moments of quiet solitude are to be cherished.

Once the rain had stopped, I continued walking along the coast passing through picturesque rice fields with one eye on the trail and another on the horizon trying to see which way the weather was turning.

I reached Kannon-ji (観音寺 – 80) near Obe Port close to 3 pm. Nobody seemed to be around but I finally found someone who worked at the temple to stamp my book. She spoke so fast that it was almost impossible for us to communicate.

Leaving my bag at Kannon-ji (観音寺 – 80), I walked ~1,200 m up the mountainside behind it, following a path that had seen better days. At the top, there was a large group of buildings which turned out to be used for esoteric Buddhist training (Yama no Kannon) but unfortunately, there was no view since everything was enclosed by trees.

This trail isn’t officially part of the Shodoshima 88 pilgrimage so you can skip it unless you fancy the exercise.

Back down at Obe Port (大部港), at 4.30 pm I checked to see if its cafe was open but predictably it wasn’t. I was worried about it raining so headed swiftly for Kobe (小部) which was about a 30-minute walk away.

On the way, a man in a car kindly stopped to ask if I was alright. I assured him I knew where I was going.

The beach wasn’t perhaps the best place to camp in this weather but it was an official camping ground and there was a toilet/shower. I put up my tent at what I thought was the most sheltered spot. I immediately regretted this when the wind started pulling the pegs out of the ground. I found a stack of concrete cinder blocks nearby and used them to anchor all the lines more securely but the tent was still getting buffeted like crazy.

After a cold 3-minute shower, I settled down for the night, eating another sandwich and some potato crisps for dinner. I felt lucky to have supplies that didn’t need cooking as it was way too windy to use my burner.

After dark, it began raining, but despite this and the wind, I felt lucky to have skirted the worst of the weather today. Now all I needed to do was survive the night!