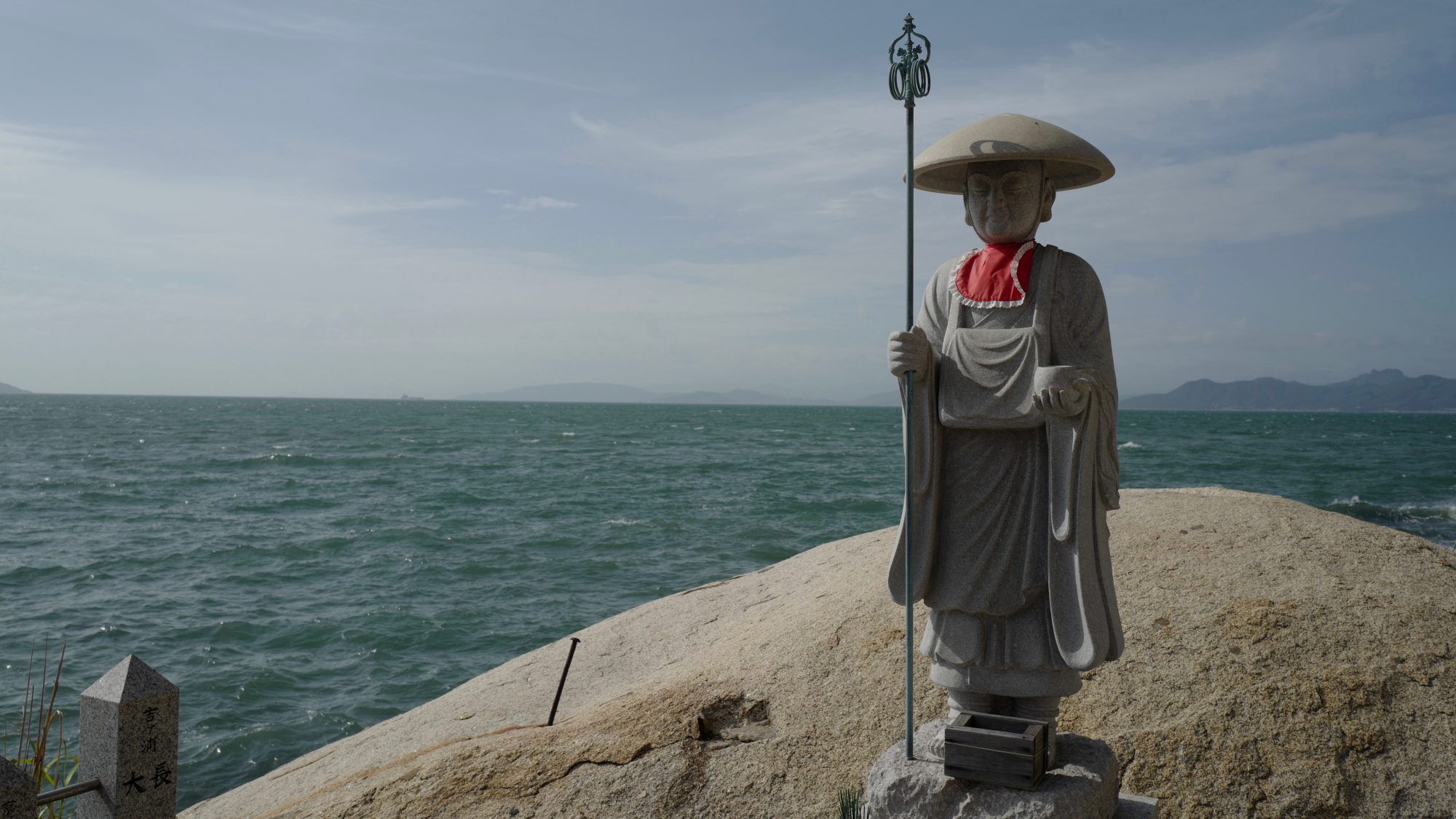 Considering the howling gale outside, I slept well and woke up around 6 am to clear bright skies. After eating some bread that I bought at the supermarket the day before for breakfast, I began the days walk at 7 am.

My route in the morning took me around Maejima (前島), mostly along asphalt roads hugging the coast. Given I was doing a loop, I was able to leave my large backpack at the hotel during the day.

The pilgrim trail is sporadically marked so having a map is quite important. There is no official English map of the route yet but I managed to get a GPS trail of the whole route which can be conveniently viewed in Google Maps on your phone (shown at the bottom of each of these posts).

The first temple of the day was Kanro-an (甘露庵 – 59) which sits on a hill overlooking Kashima Beach. It had a lovely wisteria-covered seating area to enjoy the view from.

The road climbs as it heads inland and soon you begin to see olive trees dotted along the sides of the road. Shodoshima is famous for being the first area of Japan to successfully grow olives due to its warm Mediterranean climate.

If you take a short detour away from the road you can see one of the oldest olive trees; purported to be 1000 years old. Amazingly it was virtually dead in 2011 but some TLC from local residents bought it back to health.

The most picturesque temple of the day was Goutou-kutsu (江洞窟 – 60) which is built into a cave on a rocky outcrop overlooking the sea beside a small harbour. The unique main hall is inside the cave itself, making it very atmospheric.

Walking through the tiny villages along the coast, there seemed to be a community spring-cleaning day underway with plants being watered, leaves being swept and firefighting machinery being serviced by volunteers. This is one aspect of Japan that I really admire.

As with all rural communities in Japan, I passed many abandoned buildings being slowly reclaimed by nature. It’s both sad and hauntingly beautiful.

Daijou-den (大乗殿 – 62) and Renge-an (蓮華庵 – 63) sit together on a hill overlooking Tonosho Port. I sat here to take a break and enjoy a mid-morning snack, thankful that the walk had begun well. Before any long walk, I’m always nervous about the logistics but this all melts away once my feet hit the trail.

By 10.30 am I had already completed my loop of the peninsula, so headed back to pick up my backpack. Since I was ahead of schedule, I went to relax in the 405CAFE for an hour and then onto the Maruyushi Center (マルヨシセンター 土庄店) supermarket for lunch as well as to buy supplies for camping on the remote northern side of the island; simple stuff like bread, cheese, ham, and energy bars.

At around 1 pm, I set off heading north along highway 253. My hotel was only about 40 minutes away but I had three temples to visit in between.

Jougen-bou (浄源坊 – 57) wasn’t terribly interesting save for the Shinto shrine next door which had a wonderful old tree leaning over it precariously.

Koumyou-an (光明庵 – 65) was rather strange, with the main hall being in a creepy dark basement with some less-than accomplished murals painted on the walls. I didn’t hang around long.

Looking at many of the traditional buildings in Shodoshima, you’ll notice that most have charred wood cladding. This is a traditional Japanese method of wood preservation called Yakisugi (焼杉). Yaki means to heat with fire, and sugi is cypress. I love how it highlights the wood grain.

I arrived at Hotel Green Plaza (ホテルグリーンプラザ) a little after 2 pm. The hotel has beautiful views over the Seto Inland Sea, including an outdoor onsen which is perfect to rejuvenate the legs. I treated myself to a beer on the veranda.

I was originally given a tiny room whose prior occupants seemed to have been heavy smokers. After I complained I was moved to another room but it slightly irked me. I had to remind myself that one of the principles of the pilgrimage was not to get irritated or angry.

In the evening I sat with my iPad, nervously looking at the weather forecast for the day ahead when I would be camping. The situation didn’t look good, with strong winds and rain predicted. I phoned a few places to see if I could book a room for the night but of the three old ryokans there, one had closed down, one was on holiday, and the other was full. I’d just have to take my chances.