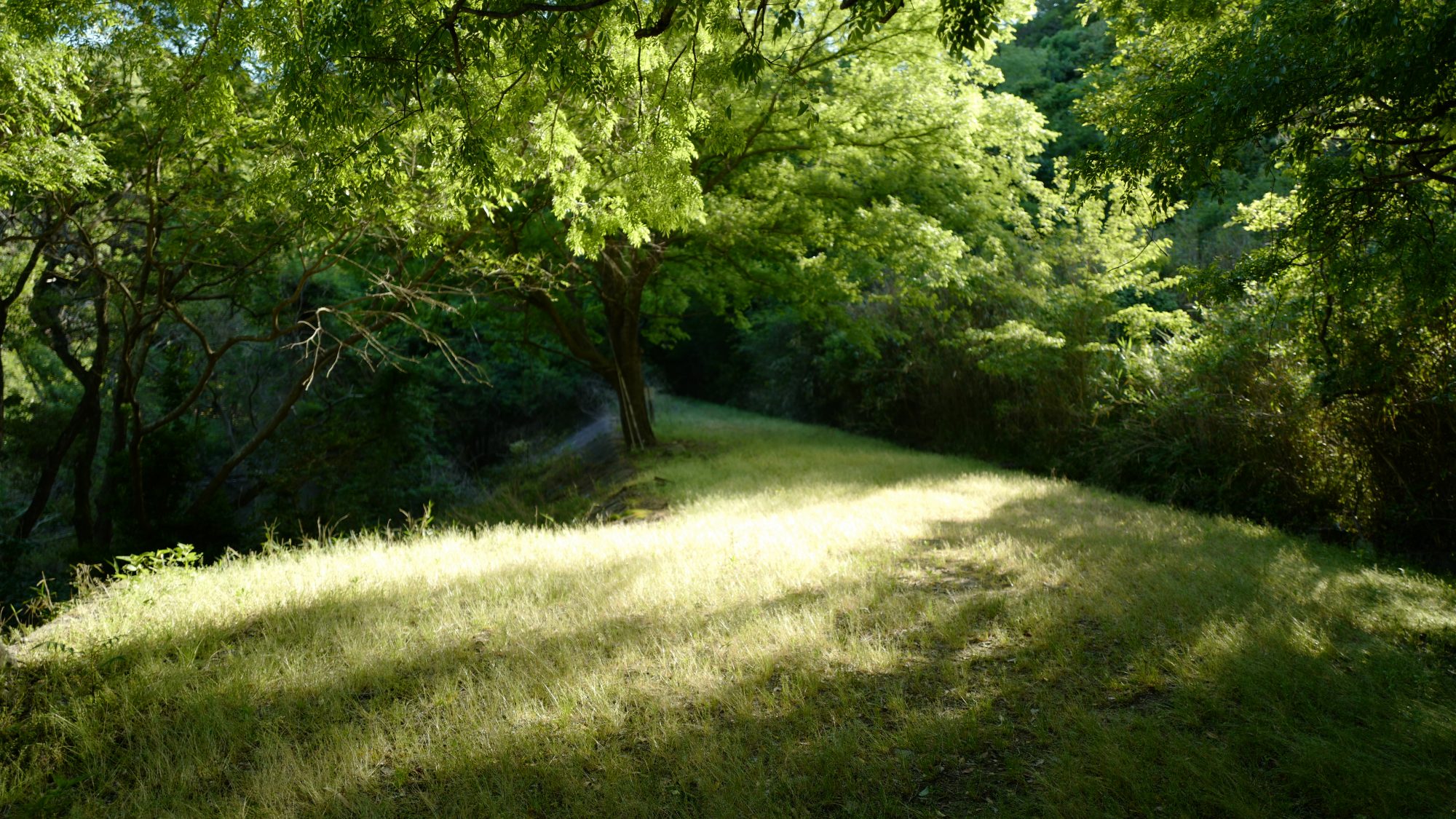 The wind subsided at about 2 am in the morning and then I was just left with the sound of the waves to lull me to sleep. I woke with the sun shortly before 6 am and was happy to find the tent intact without having suffered any damage.

After a rather ambitious breakfast of slightly burnt banana pancakes, I packed my valuables into a light day pack and set off to climb up to Emonno-taki (恵門ノ瀧 – 81) at 7.30 am.

If you’re carrying your bag with you, you could leave it at the branch where the trail meets the road briefly. This way you can avoid carrying it the whole way up.

The uneven trail runs straight up the mountain for about 30 minutes until reaching a stone staircase. Further up is a gate tower which was roped off but it didn’t look in imminent danger of collapse so I carried on through.

Shortly past here I met a monk sweeping leaves. He was a jolly fellow who asked where I was from and on hearing I was British started telling me about all the rock and roll bands he loved. He also went on at length about Britain “escaping” the EU and how Honda was moving its manufacturing out of the UK because of it…

To reach the top of the temple you can clamber up the slippery near-vertical rocks using some rusty chains or walk up the stairs to one side. The chains looked like a death wish so I opted for the stairs.

The monk beat me to the top and gave me a tour around the inside of the temple where the rooms are burrowed into the cliff face. He asked me to write my name on three pieces of wood before conducting a fire ceremony for me, chanting away while the fire grew bigger and bigger. Thanks Nishimoto-san for the blessing!

It was almost 10 am by the time I made it back down to my campsite. I packed up my tent quickly and was back on the road at 10.30. The henro trail immediately climbs back into the mountains, heading north-east.

Be warned that there is nowhere between Kobe and Fukuda-an (福田庵 – 83) to get water or food so be sure to take enough with you.

Upon reaching the top of the mountain, I was treated with a fine view over Kobe below. After walking along the ridgeline for a short while, for the second time on my trip I spotted a wild boar making a dash for it ahead of me.

An hour of huffing and puffing later, I reached the enormous Yoshida Dam (吉田ダム).

The trail skirts the edge of the lake and, just before reaching the dam, you pass through a gate with a hand-painted map on it which shows the way to descend down the wall.

I found a bench with a nice view to sit and eat my lunch at the opposite end of the dam.

To reach Yoshida-an (吉田庵 – 82) you need to climb down an endless flight of stairs which hug the dam wall and then follow the outlet stream. It’s a bit daunting but pretty safe.

If you have enough supplies, you could spend the night near here at the Yoshida Camping Ground (吉田キャンプ場). Just beware there are no shops nearby.

After visiting the temple, you immediately head upwards again, retracing part of the route along the river.

Arriving in the port of Fukuda (福田), the first vending machine I passed was a sight for sore eyes. While drinking water all day is fine, its always nice to get a cold refreshment from this omnipresent icon of Japan.

By this point, it was 2 pm and I was only about half-way through my walk for the day. With two proper climbs behind me, my legs were beginning to complain but I had to push on.

After visiting three temples you’re spat out onto the coastal road for a long hike down the eastern side of the island. There isn’t much of a hard shoulder so be sure to be on the watch out for passing cars. The large lorries visiting the nearby quarry are particularly hazardous but you can hear them coming from a long way off.

Close to Kaitei-an (海庭庵 – 87), I had been hoping to take a break at a cafe (珈琲とブーケ) which apparently serves good cheesecake but it was unfortunately closed. No rest for the wicked!

By 4 pm I had reached Narei-an (楠霊庵 – 88) which is where the final off-road and up-hill section of the day began. The entrance to this path is rather hard to find – it’s behind a cemetery on the hill which you need to walk through.

The trail takes you inland to Shodoshima town near Kusakabe Port (草壁港) on the southeastern side of the island via a pleasant forest path. At golden hour it was beautiful.

Many trail entrances/exits were fenced off to stop wild boar destroying crops meaning you need to untie and then re-tie them after passing through. I found one held together with a sickle! Nearby was a boar-sized cage trap which was primed and ready for action.

By this point, my feet and shoulders felt absolutely destroyed so I was so happy to arrive at Okano-bou (岡之坊 – 12) which is right next to Hirokiya Ryokan (ひろきや旅館) where I was staying for the night.

I was warmly welcomed by the old couple who run it with their children and grandchildren. The hot bath and dinner were most welcome.

Stepping out after dark I could hear the chirp of the cicadas in the surrounding fields. Too tired to write anymore…