If you liked Sony’s rather creative Bravia adverts (remember the bouncing balls and exploding paint?) then you’re probably going to enjoy their latest “colour like no other” commercial, coming to screen near you very soon: 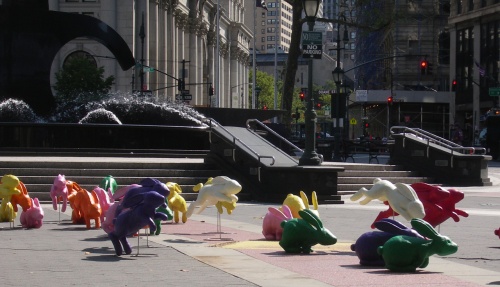 Featuring hundreds of bunny rabbits animated in play-doh directly on the streets of New York the commercial has the same sense of playful surrealism like its predecessors. To achieve the effect in a very short space of time separate bunny models were made for each frame of each sequence which were meticulously rehearsed before shooting on the streets of NYC, a particularly cool backdrop! To create the high volume of bunnies in each sequence the same models were reused in different positions thus getting more for less. Here’s the final ad:

Check out the equally innovative official site for a higher-res video and more behind the scenes information [via].

Elsewhere… I’m having an exceedingly busy week consisting mainly of working, eating and sleeping. Lots going on but hopefully I should have a chance to update more soon 🙂