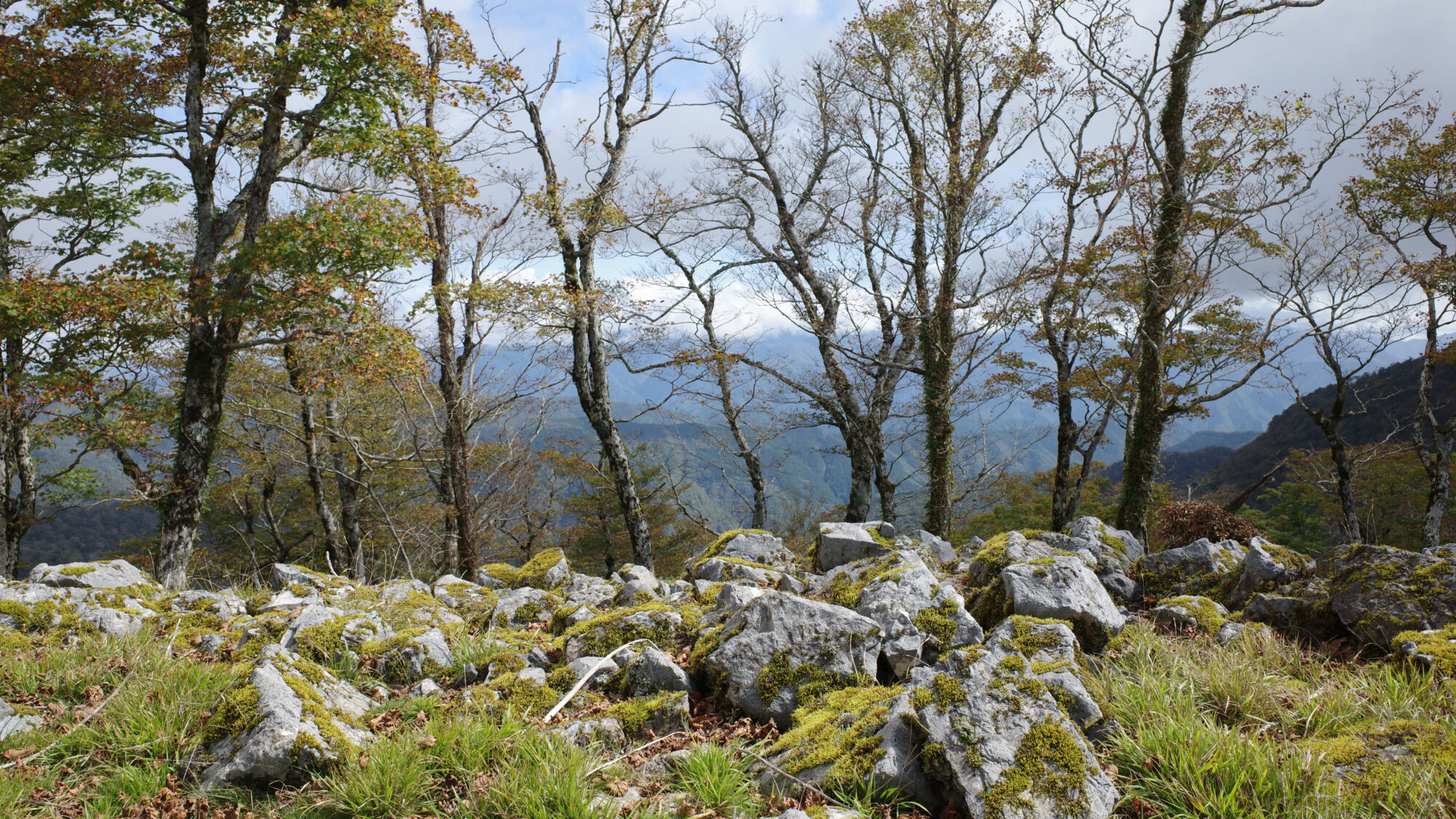 At 5.30 am, I managed to pull myself out of my warm sleeping bag and stumbled to a rocky outcrop that overlooked the mountainous landscape beyond.

A thick blanket of fog hung below the peaks that surround Mt. Misen (弥山), the rising sun creating a brilliant orange halo that reflected its light onto the clouds above. Despite the early hour, it was mesmerizing.

It’s a short 30 min walk from Misen to the peak of Mt. Hakkyogatake (八経ヶ岳) which is the highest point of the whole route at 1,915 m. It was also the last place I’d see another human for the next few days. The point of no return had been reached.

The morning consisted of a 300 m descent to Yōji ga Shuku (楊子ヶ宿小屋) that included a few sketchy traverses which required considerable concentration not to slip into the abyss.

Before attempting anything risky, I always pause to weigh up my options and try to work out what I would do if something went wrong (mostly which tree root or branch to grab!).

At the hut, I paused to eat lunch and take stock. In truth, I was feeling very low on energy and the fact that I was struggling to swallow food made me realise I was probably dehydrated. I gulped down half a litre of water and almost immediately began to feel better.

Behind the hut, I followed the arrows downhill in search of water but came back empty-handed. Although unavoidable, it was frustrating to waste energy.

I was feeling thankful for the near-perfect hiking conditions; neither too hot, cold, wet or humid.

Shugendō monks walking the mountains leave thin wooden prayer boards called Hi-de (碑伝) at Nabiki (靡) and its Yohaijo (遙拝所), sacred sites marked by stones or statues along the trail. These are similar to the osame-fuda (name slips) that pilgrims in Shikoku and other places use.

It’s worth reiterating that although the trail is generally well signposted, there can be moments of ambiguity where you’ll need a map and some common sense.

In the afternoon, the mist descended on the mountain, shrouding my view of the path ahead which was probably just as well given I had three more peaks to summit before reaching my goal for the day.

For much of the afternoon, I strapped my hiking pole to my backpack since I needed both hands free to clamber across the precipitous ridgeline.

After much exertion, I arrived at the 1,800 m peak of Mt. Shakagatake (釈迦ヶ岳) at 2.30 pm. It was a relief to know that it was all downhill for the rest of the day but my quest for water had so far been fruitless and my reserves were almost depleted.

Taking the direct route to Jinsen no Shuku (深仙の宿) would have meant risking its water hole being dry but a short signposted detour on your way down takes you to another water source next to a campsite. I shouted for joy when I discovered its steady trickle.

With the water problem solved, I followed the path 30 minutes further downhill, arriving at the hut at 3.45 pm. The simple shack, covered in corrugated steel painted blue, sits in a saddle between two peaks near a small shrine.

The adjacent water hole was a bare dribble so the earlier detour proved worthwhile.

I sat outside for watching the mist swirl around until I began to feel its melancholic chill. The relative comfort of the small hut with its solar-powered lights beckoned me and I decided to spend the night inside. The bear warning poster on the walls and USB charger reinforced my decision!

After hanging my damp clothes to dry and cooking up a hot meal (curry risotto with soybeans), I indulged myself with a podcast before going to sleep. The halfway point had been passed and save for some painful feet, I was feeling pretty good.