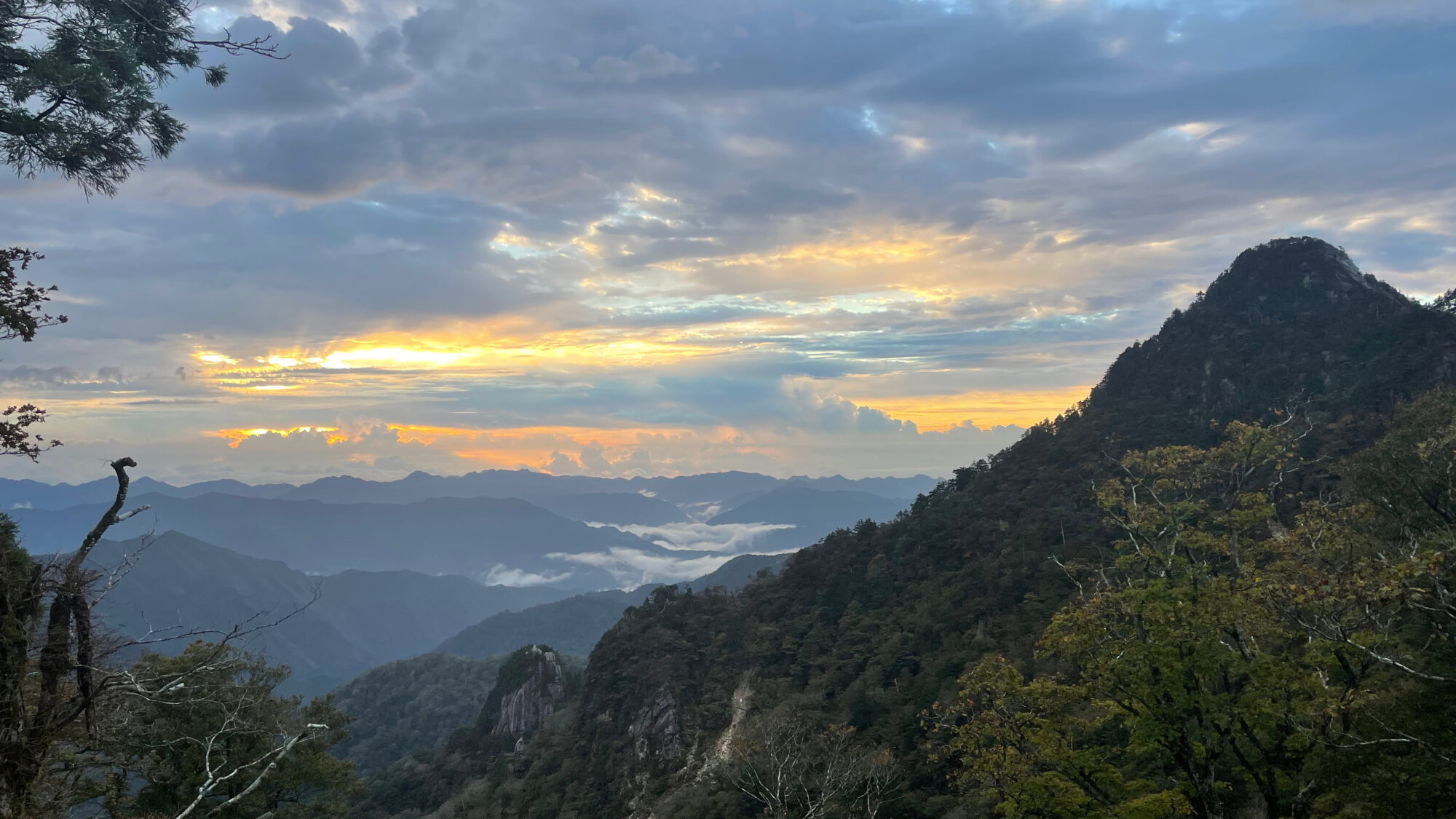 Sunrise flooded the small windows at Jinsen no Shuku as I packed my things and hit the trail shortly after 6 am. By now, I was used to rising just before dawn so that I could make the most of the daylight hours.

The day got off to a soggy start as my boots brushed through alpine shrubs covered in morning dew. Before long my shoes, socks and trousers were soaked. While this wasn’t going to do my sore feet any favours I knew they would dry during the day.

There seemed to be an abundance of wildlife on this part of the trail with the rhythmic sound of woodpeckers tapping incessantly against the knarled beech trees making their presence known. A wild boar grunted and ran off as soon as it heard me.

The path meanders across the wide ridgeline through thick grass and moss. Despite the interruption from the occasional fallen tree it’s easy to follow and there are plenty of flat spots where you might wild camp if caught between huts.

Just before reaching Jikyō no Shuku (持経の宿) the trail drops steeply and it’s a scramble down to the hut, helped by chains and ropes. I paused for a bite to eat and to refill my water bottles from the generously collected supply at the hut (which is large and well equipped).

After joining a local road for five minutes, the trail once again rises steeply until reaching Heiji no Shuku (平治の宿) about an hour later. The hut is basic but would be a comfortable place to spend the night, especially in the colder months with the wood burner lit.

I noticed that a lot of the pine trees in this area had their bark bound up with string towards their base. I’m guessing this was some sort of protective measure against damage.

As with previous days, the mist descended in the afternoon and my ascents of both Mt. Tenpōrindake (転法輪岳) and Mt. Gyōsendake (行仙岳) were without views. For the latter, I took a path around the side of the mountain to avoid having to go all the way to the peak.

By 4 pm I had reached Gyōsen no Shuku (行仙の宿) and again decided to spend the night indoors. This was one of the larger huts with solar-powered lights and a USB charger. It felt great to be able to organise my gear, cook up some ramen, and give myself a proper wash with a clean towel I had been saving for the occasion.

Discoloured photos on the wall show volunteers building the hut back in the late 80s, complete with old helicopters airlifting in supplies and ceremonies conducted by Shinto priests. It always feels a bit eerie staying alone at these places.

My diary entry for Day 5 was simply a wavy line with AM on the left and PM on the right such were the constant ups and downs (I counted at least 11 peaks). No wonder they call it “ascetic training”, it was endless!