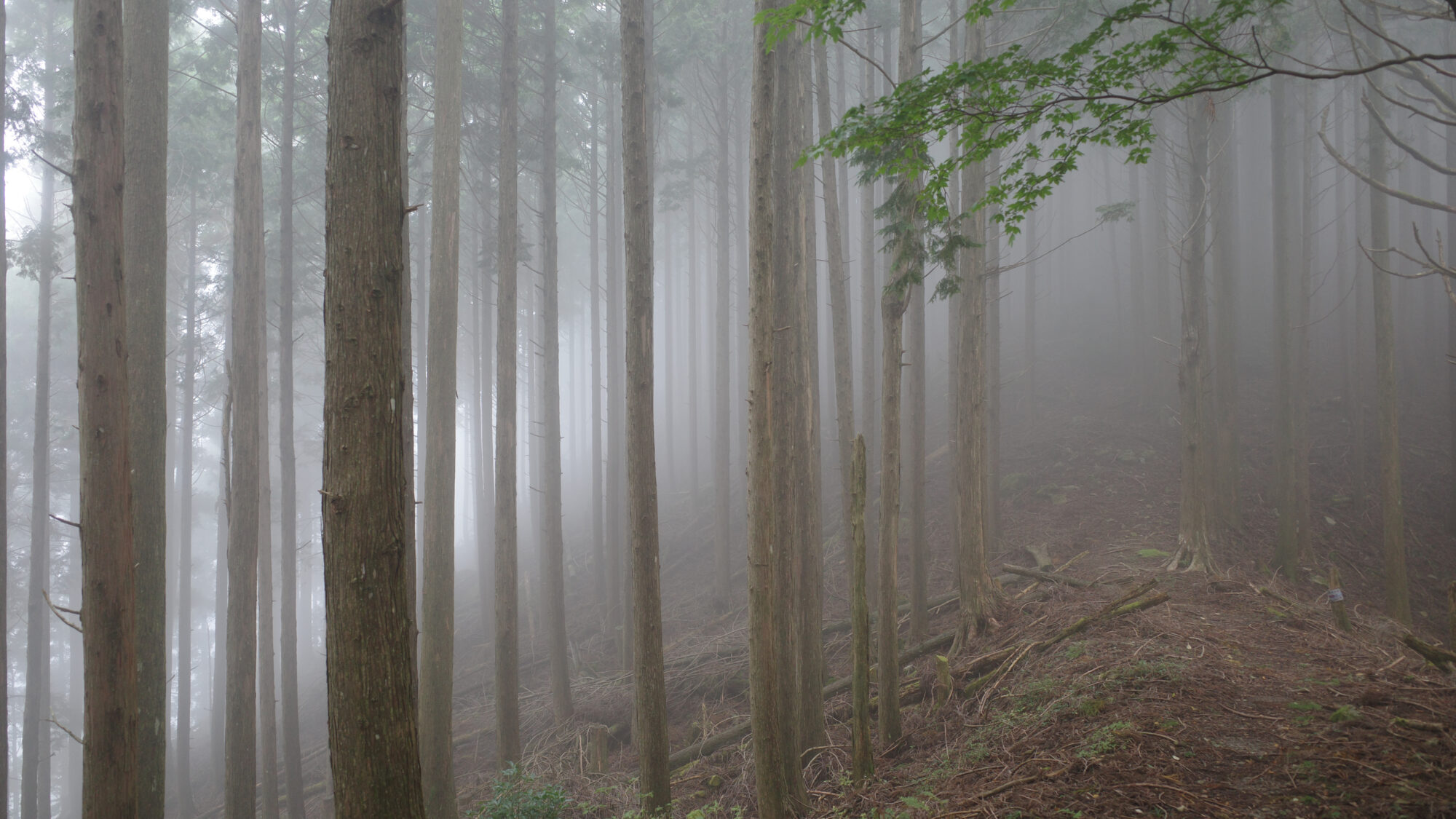 After a good rest overnight at Gyōsen no Shuku, the end was now in sight and I was eager to make headway. The early morning light provided spectacular views of the mountains rising out of the clouds as I began the steep trudge up Mt. Kasasuteyama.

By 7.45 am I had reached the peak (1,353 m) where a small stone statue of Dōsojin (道祖神) with a carving of a couple holding hands caught my attention. It reminded me that I’d not spoken with my wife since beginning the hike (reception is virtually non-existent in the mountains) so I turned on my phone data and was happy to find I had a couple of bars of signal.

I managed to send her a short message and a photo of the view before beginning descent, feeling homesick and ready to finish the adventure.

After descending you have the choice of going up to the ridgeline or taking an old logging trail that stragglers the side of the valley through the tall pine trees. I choose the latter, mainly to save my legs but also for a change of scenery.

This turned out to be an interesting choice since the lower path is not maintained and was partially blocked by fallen trees and landslides which slowed my progress as well as being rather treacherous. On the positive side, there are a couple of gullies where it’s possible to collect water.

If you take this route be warned that about four-fifths of the way along, there are signs that encourage you to take a path left/down instead of straight ahead. Although the lower path would eventually join back up to the main trail it’s a long detour that would add hours of walking to your day. It’s probably signed like this because the last part of the path is in particularly poor condition but passible if you’re careful.

Eventually, the path emerges at a clearing for an electricity pylon. It was a sign that I was nearing civilisation and I was struck by how much of an eyesore these necessary bits of infrastructure are on the landscape but jealous at how effortlessly the wires span massive gaps between the peaks.

From here the path drops down almost 500 m to its lowest point of the day before beginning the gradual climb up Mt. Tamakisan (玉置山). The path crisscrosses the road on the way up, with some good viewpoints along the way. With my legs conditioned to the constant ups and downs at this point, I felt like I was flying through the landscape.

Close to the peak, Mt. Tamakisan Observatory (玉置山展望台) is worth noting as it would make a good place to camp the final night if the timing was right – you could set up a tent or bivvy bag under the wooden gazebo and adjacent there’s a toilet with a rain storage tank.

Tamaki Shrine (玉置神社) was shrouded in mist when I arrived via its topmost entrance at 2 pm, it’s ancient cedar trees looming large over pilgrims who grace its grounds. It was here the at I saw the first people I’d seen in three days. I must have looked and smelled like a hobo by this point so hastily masked up and kept my distance.

The shrine is said to have been established in the year 37 BC and its oldest cedar tree, the Jindai-sugi, is around 3,000 years old. It’s a key stop for pilgrims on the Omine-okugake Michi.

At the shrine office, I asked the head priest whether I could fill my water bottles up. He asked me in English where I was from and told me that he had once visited Ireland. After a pause he sighed and added “But there was nothing there…”. I nervously laughed.

Tamaki Shrine is the last place you can collect water before the end of the trail so be sure to fill up after getting permission. Camping on the shrine grounds is prohibited.

I had originally intended to camp at the base of the mountain at Hongutsuji (本宮辻) but since it was still early afternoon I pressed onwards. The trail follows a forestry road for a short while before climbing toward the peak of Mt. Ōmoriyama (大森山) that I reached at 4 pm (1,045 m).

In retrospect, it would have been best to camp overnight on the peak but I was keen to save myself time the following day and so pressed on into the golden hour, trying not to have an accident on the way down.

Just as the light was fading at 5 pm, I found a flat spot to camp a little below Mt. Godaisondake (五大尊岳). I quickly put up my tent and warmed up some beef stew for dinner.

After the sun had set, the forest erupted with the sounds of animals rustling and squawking all around me. I prayed that I hadn’t camped on a boar or bear trail and put in earplugs to try and sleep but was too excited about finishing the walk to get much sleep. Thoughts of drinking an ice-cool coke and eating some proper food played heavily on my mind!