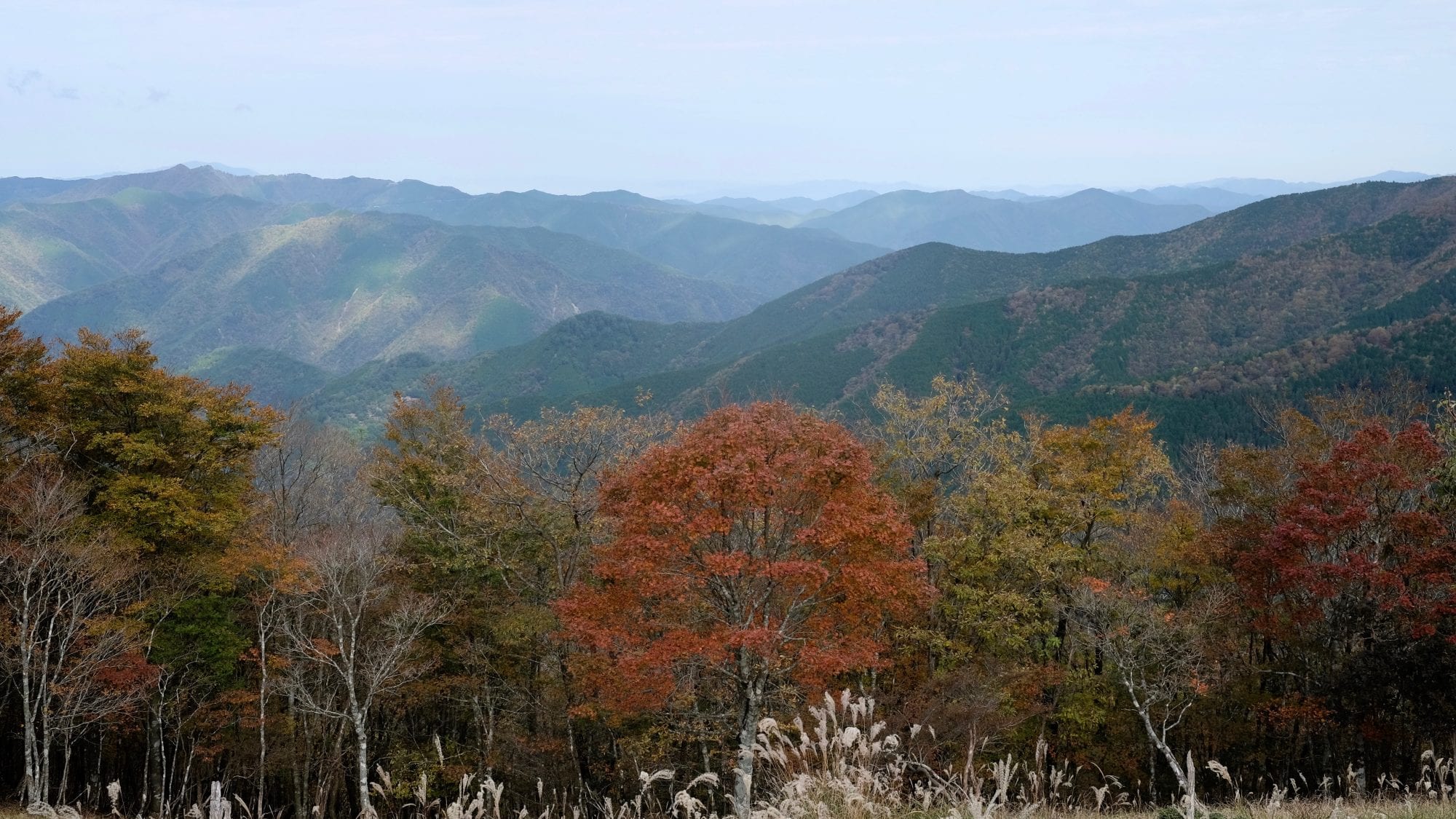 After a fitful night’s sleep, I awoke early on Day 3 and had a healthy breakfast of fish, rice and salad before heading out the door at 8.30 am. My legs were starting to feel the strain but I was in high spirits.

The sun was straining to make its presence felt through the clouds but the mountainside trees looked magnificent in their various stages of photosynthetic decay. The patterns of native deciduous trees and managed conifers make for a beautiful patchwork landscape.

Following the road parallel to the river, I rounded a bend before reaching Omata-bashi bridge which crosses the Kawaharahi River. On the opposite side, a small village was nestled below rice terraces on the mountainside.

Walking through the sleepy community, the only sign of life was a barking dog. The trail passes through a graveyard before beginning to ascend steeply through the forest, zig-zagging its way up the mountain.

After about 40 minutes of uphill grind, I came across a clearing in the forest near the Kaya-goya-ato ruin with a beautiful log cabin provided for travellers to freely use.

Inside was a sleeping platform, wood burner and ample supply of logs. It made me wish I was camping again although I was thankful for not having to carry the extra weight.

The trail continues to climb for another 2km before levelling off around 1300m at the beginning of the Hinoki-toge pass (named after the type of cypress wood grown locally).

Snaking through the forest, the pass provides tantalising glimpses of the mountains beyond, just be sure to keep an eye on the path ahead or you might take a nasty tumble!

I passed some curious-looking plants I’d never seen before. They turned out to be arum maculatum whose bright red berries are extremely poisonous. Even touching them can cause allergic reactions.

At the Obako-dake junction, you can choose to continue around the mountain or go over the summit. Since I wasn’t in a rush and the weather was fine I choose to go up to the peak.

The short climb was rewarded with spectacular panoramic views of the Ōmine Mountain Range (大峰山) to the east and Mt. Gomadanzan (護摩壇山) to the west. Dappled light grazed hypnotically across the horizon.

I stopped to eat the small bento provided by the Minshuku Kawarabi-so; delicious onigiri with fish and vegetable tempura. It was one of my favourite moments of the whole trip.

I continued downhill to the Obako-toge pass which leads to the ruins of the Uenishi House (上西跡), an old inn and teahouse. There’s not much to see except some stone foundations but the surrounding trees and flowers make it quite a picturesque spot.

The modern trail follows a ridgeline but there’s an older trail still marked on the map which runs parallel further down the mountainside. I was sorely tempted to follow it but if there had been any landslides it would make for a long walk back so decided against it.

By mid-afternoon I was feeling pretty knackered from all the ups and downs of the trail so was relieved when I reached the Obako-dake trailhead at 4 pm.

Back on the valley floor, I saw the first signs of industrial activity in the area with huge lorries being used to haul away excavated sediment from the dry river bed.

Luckily my lodgings for the night were just a 10-minute walk away at Minshuku Mandokoro, a 300-year-old farmhouse in Miura-guchi (三浦口) run by a lovely old lady and her son (more on this tomorrow).

After a dip in the scolding hot bath, heated underneath by a wood fire, dinner was served early at 5 pm. On the menu were locally caught boar meat and fresh vegetable tempura. Delicious.

Evening in the mountains gets pretty chilly so I was more than happy to get an early night under the thick covers of the futon in the beautifully sparse traditional room.