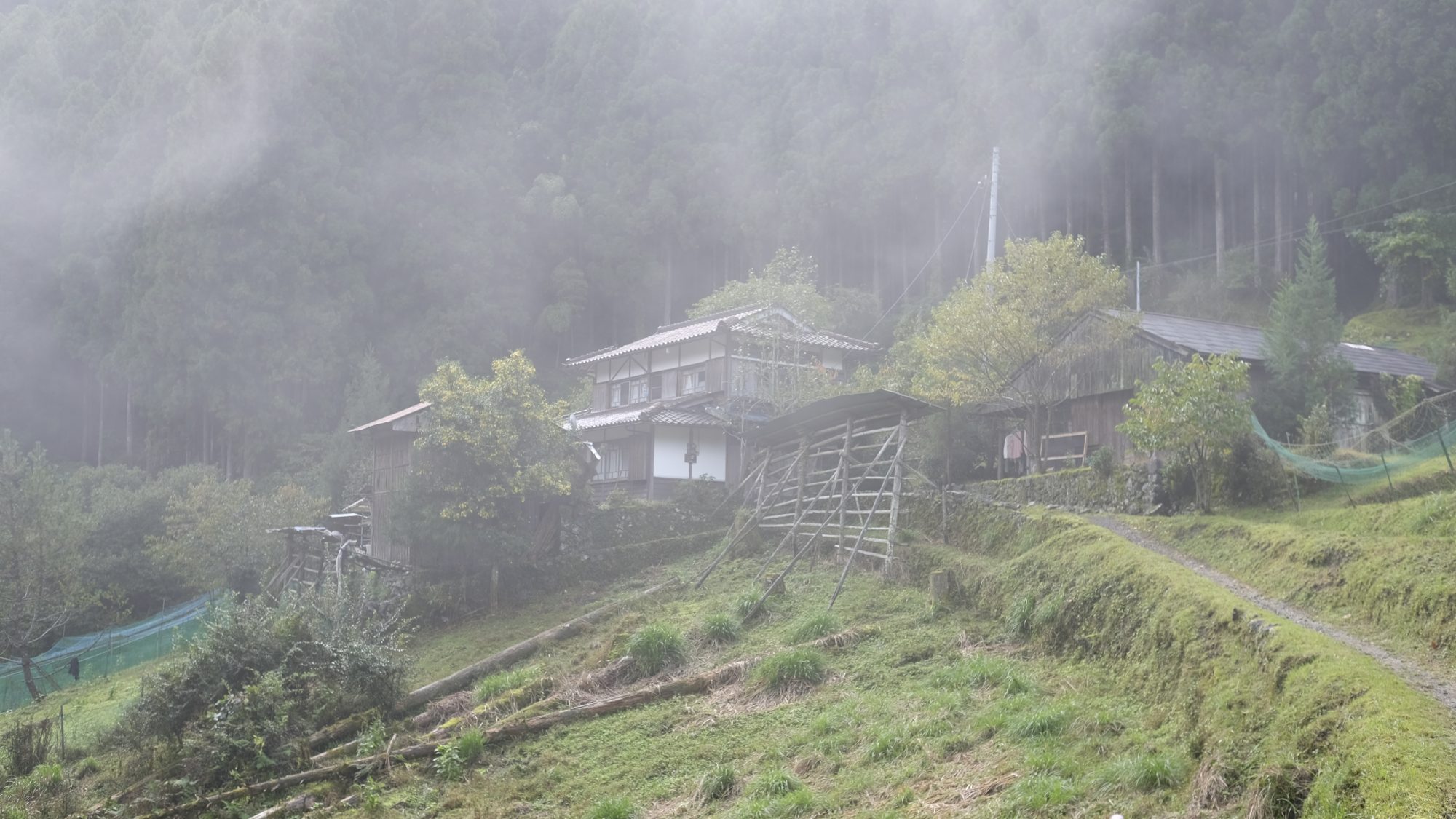 It rained hard overnight and the valley was shrouded in mist when I awoke at 5 am to the sound of breakfast cooking in the adjacent kitchen. I dozed off till breakfast at 7 am, another feast of local ingredients.

Since most foreigners blush at the prospect of eating raw eggs, the owner had substituted it with an omelette although I would have been just as happy with tamago gohan (卵かけご飯)!

By 8.30 am the rain had eased off and before departing I took it in turns with the Japanese couple, who were also staying there, to take photos with the spritely 77-year-old proprietor.

She followed us down the road as we left and gave a warm wave goodbye.

Looking down the valley I could just about make out the steep ridgeline I would be climbing today, one of the hardest stages of the Kohechi.

After crossing the Funato-bashi suspension bridge the trail immediately begins climbing uphill, passing an isolated farmhouse in the village of Miura, just below some beautiful rice terraces.

Flagstones mark the beginning of the Miura-toge pass. A short distance further on a patch of ancient cedar trees, estimated to be 500 years old, stand out with their twisted gnarled branches.

For much of the uphill section, a detour was required due to a landslide, the new path picking its way precariously through a freshly cut section of forest on the steep mountainside.

Having gained around 700m of altitude, I reached the top of the mountain at 10.30 am. Although there was a rest hut it was really windy and I didn’t want to dawdle so continued directly across the forestry road back into the forest.

The trail descends gently downhill through a stand of younger trees. I stopped at noon beside the Yagura Kannon-do shrine to eat my bento, immaculately wrapped in patterned paper.

Shortly before reaching the road, the trail passes a couple of decrepit houses, their wooden structures slowly rotting away with few signs of their former occupants. These places always make me imagine the lives that had been lived here.

Back on terra firma, I began the two-hour hike from Nishinaka (西中) to Totsukawa (十津川) along the road running parallel to the Nishigawa River. I had to dodge a couple of diggers carving up the road.

I stopped at a small store along the way to buy ice cream and the old lady running it gave me an orange for free.

This was the only part of the trip I didn’t much enjoy since huge construction trucks were frequently rumbling past a little too close for comfort. It must be driving the local villagers crazy.

After passing the large Subaru-no-sato (昴の郷) spa complex I walked through the old tunnel (to the right of the new one) and then crossed the river by way of a crazily elaborate and wobbly suspension bridge.

On the other side, I bumped into a couple of old fellas who asked the usual questions about where I was from/where I was heading before returning to their companion who didn’t dare cross.

Having checked the entrance to the trailhead for tomorrow’s walk, I continued on towards my accommodation for the night at Ryokan Tabanakan.

On the way, I bumped into a Japanese couple who had been walking the same route for the past three days. Since I was staying somewhere different tonight they had come to check I hadn’t gotten lost. Japanese people never cease to amaze me with their small acts of kindness.

The ryokan was a bit more expensive than I would normally choose but everywhere else was booked up. They had a traditional natural onsen with an outdoor area which I enjoyed before an elaborate dinner which was served in my room.