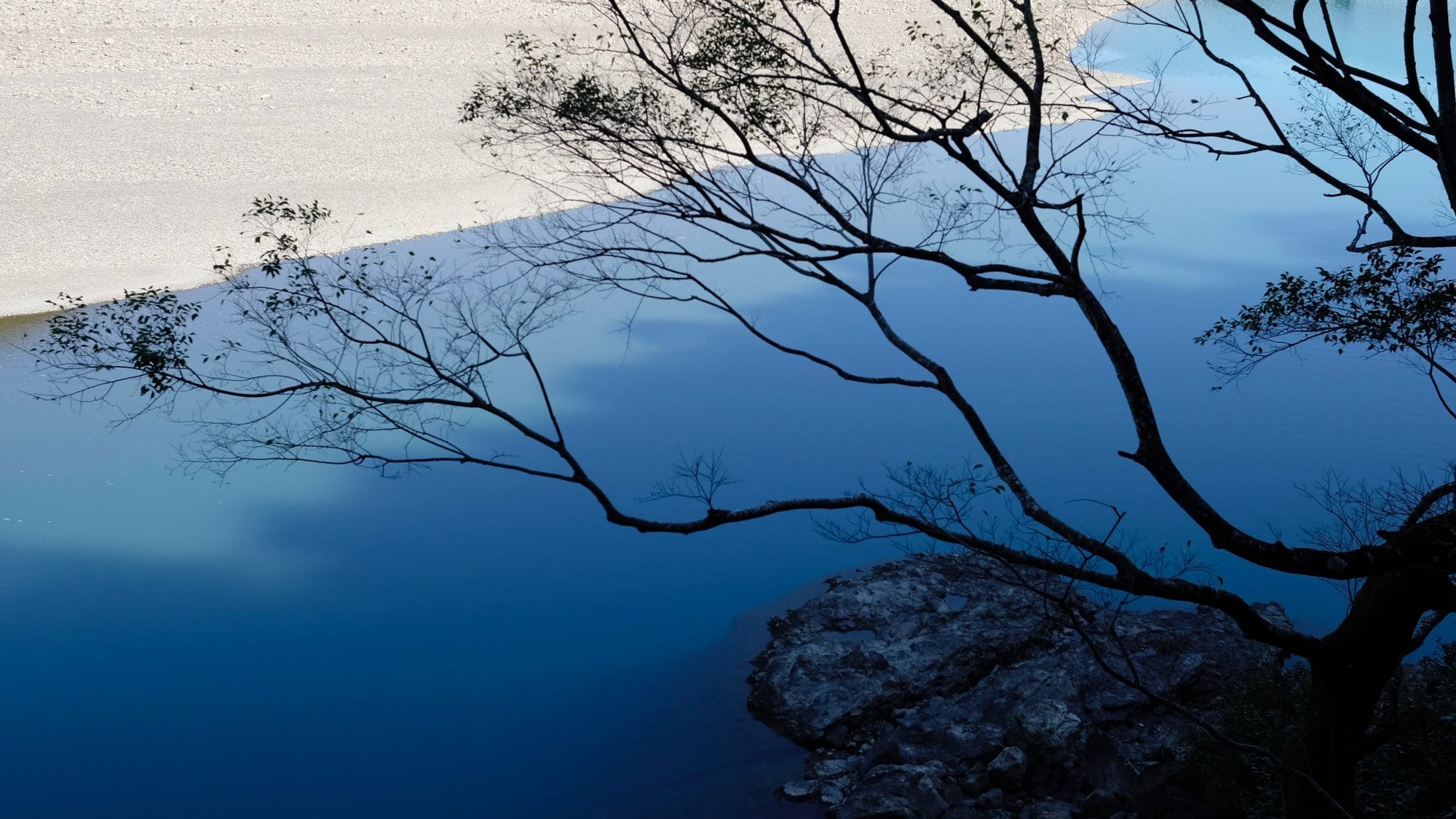 A gloriously bright morning greeted me on Day 5, the Kumano-gawa River acting as a perfect mirror to the mountains and sky above. Leaving the ryokan just before 8 am, I walked back to the Hatenashi-toge pass trailhead by way of Yanagimoto-bashi bridge.

Beside the trailhead was a beautiful water trough carved out of a wooden log.

The flagstone-covered trail immediately ascends steeply through the forest, intermittently providing some good views back over Totuskawa.

The highlight of the morning came 30 minutes later when I reached the old village of Hatenashi (果無集落). Perched beside beautiful rice fields overlooking the mountains, the village consists of a few well-maintained traditional houses surrounding a small courtyard.

After taking photos for about 20 minutes the kind Japanese couple, who I first met on day 2, caught up with me and we exchanged a few pleasantries about the landscape. Since this was their last day on the trail we didn’t meet again but it had been nice to see some familiar faces over the past week.

Passing a stone monument on the way out, I was almost loathed to leave the heavenly village, hopefully, I’ll be back one day.

I came across a flat area of land which turned out to be the remains of rain-fed rice paddies which were managed by the nearby Yamaguchi Teahouse (now a ruin). Since rice requires large quantities of water to grow this was a rather ingenious system of irrigation.

At 11 am, after climbing to 1114m, I reached the top of the Hatenashi-toge pass and stopped for a snack beside the no.17 of the 33 Kannon Buddhist images which count down the trail.

On the way down I caught my first glimpse of Hongū (本宮町) in the distance, my main destination for the trip.

I started noticing what looked like the rutting marks of large animals in the trail. I have no idea whether they were deer, wild boar or bears but it made me quicken my pace.

Having reached Yakio (八木尾) by 1 pm, the path continued along the road running beside the Kumano-gawa River. The bright blue water contrast against the white sand banks was mesmerising.

By now I was famished and stopped at a michi-no-eki (奥熊野古道ほんぐう) next to the Misato-bashi bridge for lunch. Attached to the supermarket was a small restaurant and museum dedicated to the Kumano Kodō.

A kilometre later the Kohechi forks off from the road and joins the Nakahechi route at Sangen-jaya. A stone monument marks where the original rest station was.

The final 2km leading to Hongū passes through a particularly beautiful section of woodland, heightening the anticipation for my destination.

I reached Kumano Hongū Taisha (熊野本宮大社) shrine at 3 pm. As one of the Three Grand Shines, it’s a focal point for any pilgrimage on the Kumano Kodō and nearly all routes pass through here.

I left my backpack outside on a bench and proceeded through the imposing gateway, a sense of solemnity being immediately impressed by the exquisite architecture.

Located on a ridge surrounded by giant cedar and cypress trees, the shrine dates back over 900 years, and whilst it has been periodically destroyed by floods and fires it has always been faithfully rebuilt (the last time in 1803).

One of the things I love about Shinto shrines is their use of natural or unfinished materials, allowing them to blend into the natural environment.

Here the buildings are made almost entirely of local Hinoki (Japanese cypress) with intricate joinery used instead of nails. The roof, made from bark, gracefully sweeps forward extending over the stairs and the area in front of the shrine. It is replaced every 40-50 years.

The X-shaped crosspieces that pierce the sky are called Chigi (千木) and the log-like beams that are laid horizontally along and perpendicular to the ridge line are called Katsuogi (鰹木). They add a dramatic highlight to the roof line.

After quietly appreciating the shrine I made my way back outside and down the staircase that marks the formal entrance. The sun was beginning to wane in the sky, casting beautiful shadows on the floor.

In 2000, the largest Torii shrine gate in the world was erected at the entrance to the Ōyunohara (大斎原) sandbank where the shrine was originally built. At 34 meters tall and 42 meters wide, weighing 172 tonnes, it’s hard to appreciate from photos just how ginormous it is.

The gate signifies the division of the secular and the spiritual worlds and I passed through it on my way to the Dainichi-goe route which leads to Yunomine Onsen (湯の峰温泉).

With the light rapidly fading I wanted to complete the final 3.5km as quickly as possible and kept my eyes firmly planted on the trail.

As I rounded a corner I bumped into a couple dressed from head to toe in black, looking distinctly like they were straight from The Addams Family. I made a beeline without looking back!

As I passed over the peak of Mt. Dainichi (大日山) I was greeted by the beautiful golden hour light shining through the trees.

Half an hour later I arrived at Yunomine Onsen, a quaint collection of inns tucked into a small valley deep in the heart of the mountains.

First discovered 1,800 years ago, piping hot mineral waters make their way down a stream which runs through the centre of the village and is syphoned off for use in the baths.

I checked into Minshuku Kuraya located in a charming traditional building at one end of the village and immediately changed into a yukata before heading outside to soak in the sulphurous onsen located in a cabin beside the stream.

After dinner I took a walk around the village and reflected on what had been a pretty amazing day, very thankful that the weather had remained dry. Although I still had one more leg of the trip left to complete, all the hard hiking was over and it was time to relax.