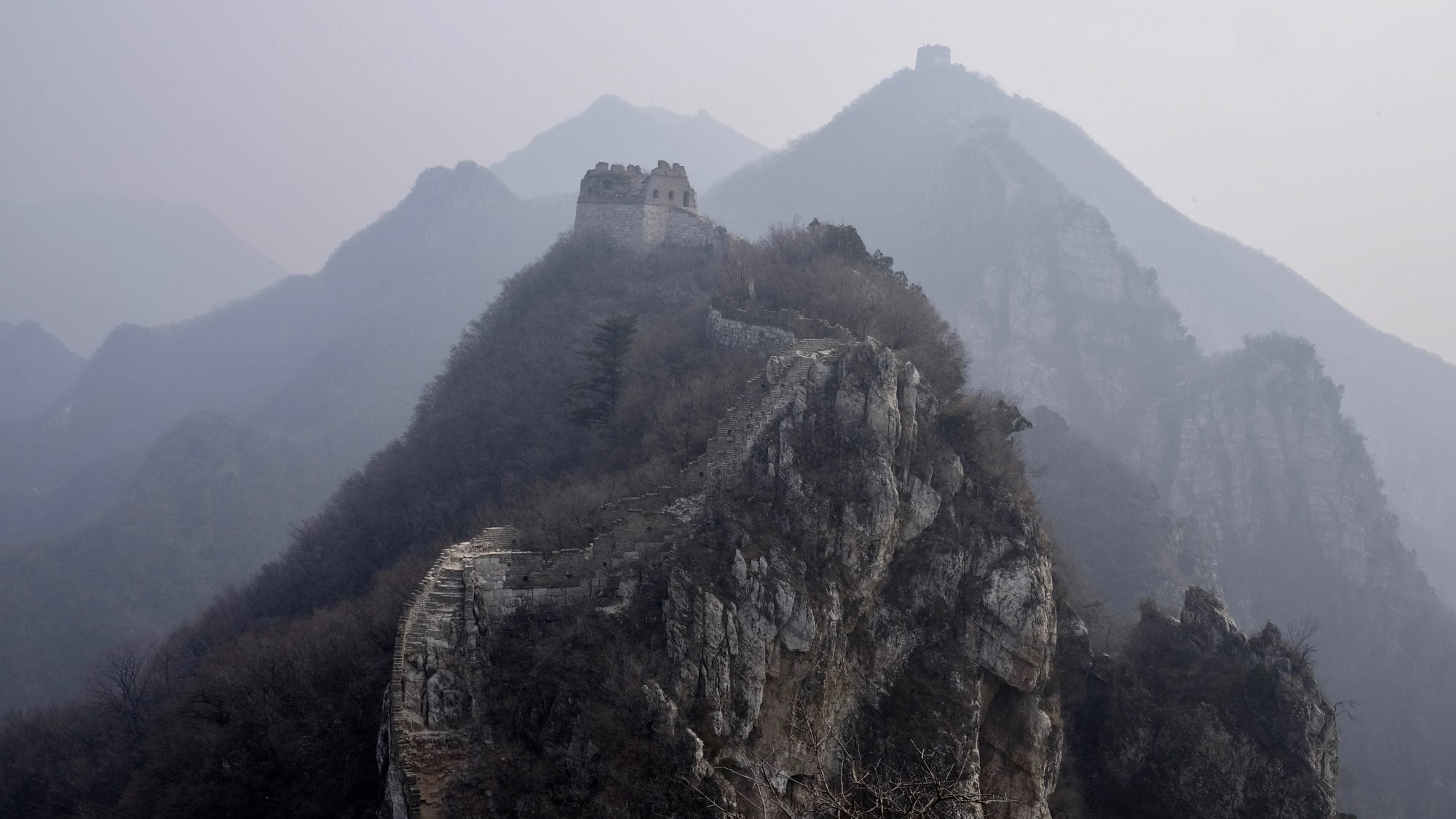 Almost exactly 10 years after I first arrived in Beijing in 2007 I found myself back there in March 2017. As has sadly become the norm, the city was shrouded in a thick blanket of smog so we decided to head out of the city for the weekend for a hike in the mountains.

I’d previously visited the heavily restored sections of the Great Wall at Badaling and Mutianyu so was keen to explore an untouched stretch that tourists don’t usually get to see. Luckily some friends who live locally know the wall well and offered to be our guides.

We left Beijing on a Saturday afternoon, piling into a comically small 4×4, and drove about two hours north to the village of Xizhazi (西栅子) where we stayed overnight in a surprisingly nice mountain chalet. The following morning, after a hearty breakfast of congee and mantou buns, we set off early to hike up to the wall.

Unfortunately, the rancid air had followed us and was blocking out the sun but we were still in high spirits and it only took about 30 minutes of light uphill hiking to reach the wall. An archway hewn out of heavy stone provided us access.

The Jiankou (箭扣) section of the Great Wall is located ten kilometres to the east of Mutianyu and was constructed in 1368 during the Ming Dynasty. Given its location along a mountain ridge bordered by jagged cliffs and steep drop-offs, it has never been restored and much of it has fallen into disrepair.

Do not attempt to traverse this section of the wall unless you have significant mountain hiking experience.

While the stone base of the wall is mostly intact, the brick stairs and walls are slowly crumbling, helped by the invasive vegetation. Despite the poor visibility, we could still see the wall stretching on for miles in front of us in either direction, punctuated by small command post watchtowers which provided milestones on our journey.

Walking along the wall is not just a case of putting one foot in front of the other. Every step needs to be carefully considered since the bricks are often loose and most of the time you’re either heading up sharp rises or down steep descents.

Most of the watchtowers have intact roofs but are rapidly eroding. Walking though I tried to imagine what life must have been like for the people manning them 600 years ago.

The section above was the scariest since most of the wall had collapsed. Previous explorers had marked out a detour using red ribbons on the mountainside to the immediate right which in itself was extremely challenging. In other places, there is no choice but to climb up near vertical walls and pray that you don’t slip.

At times, climbing up the ancient broken stairs barely hanging onto the edge of the cliff, it felt as if we were in a scene from the Lord of the Rings. The smog added to the sense of mystery.

Part of the wall on the approach to Zhenbei Tower has completely collapsed so some full-on climbing is required, aided by a one-legged ladder made from an old tree branch. I didn’t dare look down at the drop below.

We arrived at Zhenbei Tower (No. 1 East Tower) around 4 pm and stood on the roof to survey the route we had just taken with a sense of relief and satisfaction. Perched on the mountain top at 990m it is the largest and most complete watchtower in this section.

The wall continues eastwards to the Ox Horn Edge and onto Mutianyu, about a 4 hour hike away.

A local villager stood at the entrance to the watchtower, collecting a toll of about 5 RMB per person for the right to use a wooden ladder to get off the wall and onto the path which leads back down to Xizhazi.

Walking back through the village we noticed large baskets of dried corn and piles of freshly cut sticks. Even though we were quite close to Beijing, life for the farmers here is still pretty basic.

It had been a fantastic, if somewhat nerve-wracking, adventure and a real privilege to see this undisturbed section of the Great Wall. While I would hate it to be turned into a full-on tourist attraction I do hope some work is done to stabilise the crumbling remains of the wall while there is still time.