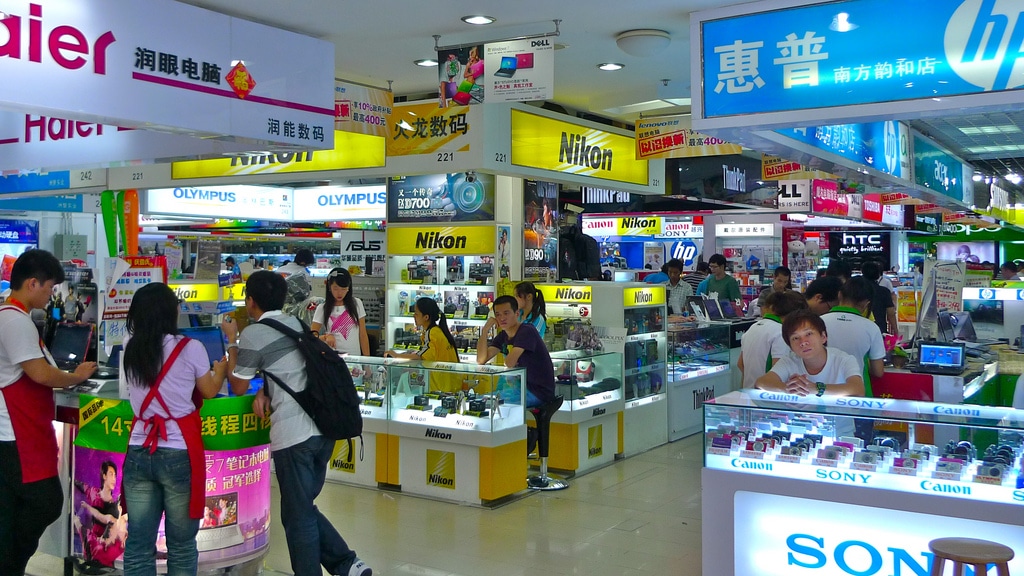 Shenzhen is generally regarded as the epicentre of the world’s electronics industry with most of the world’s major brands manufacturing their products here. You can find virtually anything you want in the many electronic markets which can be found around the city, most of which are clustered around Hua Cheng Be (Hua Qiang Lu Metro Station, exit A).

I’ve wanted to write about the area for the last couple of years but only got around to taking some photos last September during a trip there with a friend. The first thing you’ll notice is that instead of a few big shops there are in fact thousands split over multiple floors in many buildings; a bit like a department store but much more chaotic.

When purchasing anything from places like this be sure to haggle and have someone with you who can tell the genuine artefact from fakes which are everywhere. For individual components, this can be particularly difficult so it’s best to test things out in the shop before parting with any money.

I feel a bit sorry for the people who work long hours here day in and day out since the space is so cramped and there are no windows. Only in China could you find anything like this on a similar scale and even if you’re not actively looking for anything in particular it’s a fascinating place to window-shop.

Outside the metro station, you will also notice groups of middle-aged women squawking “fa piao” (发票) at everyone who walks by. What they’re selling are fake invoices which unscrupulous business-men use to claim false expenses at work, something I wrote about before – illegal but clearly thriving.