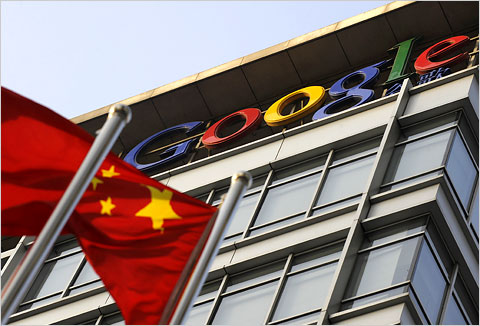 Google dropped a bomb on China and the world today when it revealed a string of sophisticated cyber attacks against its infrastructure targeted against human rights activists’ email accounts which had originated from China (similar to the GhostNet attack in 2009). In response Google has decided to cease censoring Google.cn search results (demanded by the government):

These attacks and the surveillance they have uncovered–combined with the attempts over the past year to further limit free speech on the web–have led us to conclude that we should review the feasibility of our business operations in China. We have decided we are no longer willing to continue censoring our results on Google.cn, and so over the next few weeks we will be discussing with the Chinese government the basis on which we could operate an unfiltered search engine within the law, if at all. We recognize that this may well mean having to shut down Google.cn, and potentially our offices in China.

It doesn’t get much bigger than this. Twitter immediately lit up with a discussion about the potential repercussions of the decision:

It’s too early to know what will happen but I wouldn’t mind betting that most or all of Google will be blocked in China within 24 hours. As recent events have shown (Copenhagen and the execution of Akmal Shaikh) China is in a confident mood in its new position of power and will flagrantly ignore any perceived interference from the west regardless of the ethical issues surrounding the arguments.

I personally applaud them for taking this stance but fear that even a giant like Google will make little impact against the Medusa which is the Chinese Communist Party. Every time China is criticized they only grow stronger in their resentment and determination to do things on their terms. In this sense, nobody wins but freedom is rarely free.