Watching zombies terrorize your local neighbourhood is all too common these days but it’s not every day you get to see your home and workplace destroyed by US-led NATO forces unless you live in Iraq perhaps. In an even scarcer coincidence that’s exactly what I got to observe tonight (with a touch of glee I might add) in the newly released film “28 Weeks Later“, the prequel to the 2002 cult hit “28 Days Later“. Those living on the Isle of Dogs may want to take shelter till this one’s blown over! 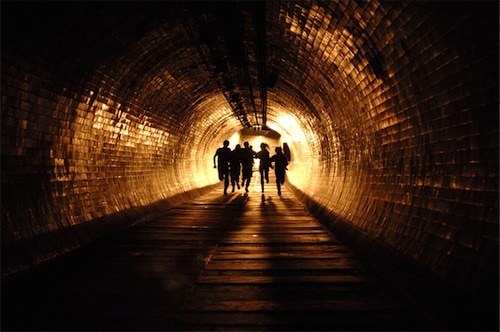 A shot from the film – scarily similar to one of mine!

I used to have a poster of the first film on my wall at university so it’s rather cool to see this one come full circle five years later 🙂 Amazingly for a sequel, it’s also actually a pretty good film in its own right. Whilst none of the original cast are included (their fate is unclear, depending on which theatrical/DVD version you saw) the premise of the new story is pretty good – Twenty-eight weeks after the infection originally broke out, an operation begins to re-populate the country, which has been declared free of infection. Of course, it’s not really gone and after one person gets infected things rapidly go downhill… all set to the backdrop of an eerily deserted London.

This is not to be missed, especially if you live in London, but probably not for those with a weak stomach! The NY Times has a good review here.