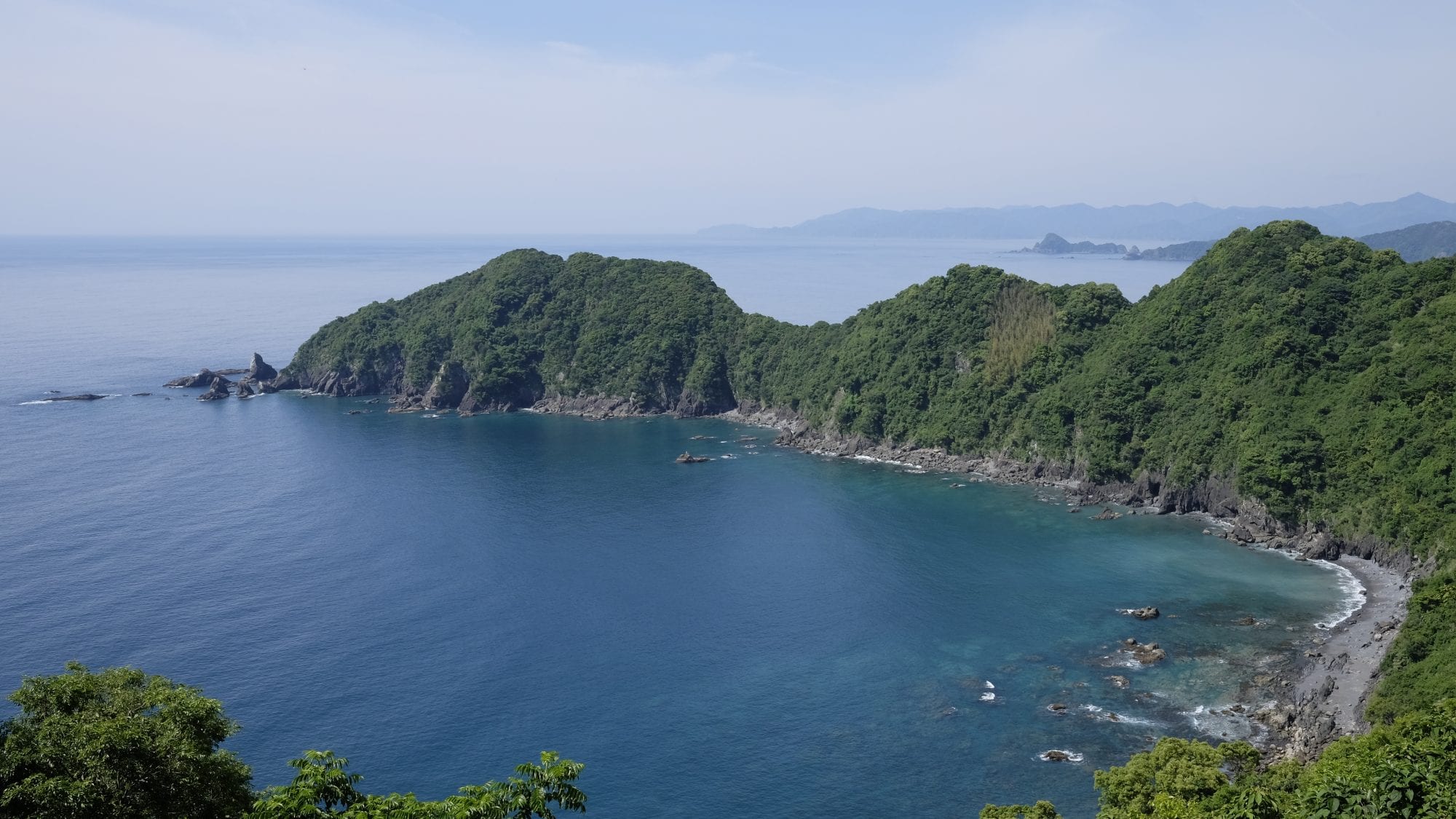 After a good night’s sleep at yesterday’s excellent hotel I woke early, had breakfast, and got moving shortly after 7 am. The hotel manager warned me that there were “only two” vending machines on the route I would be taking. I reassured him I would be fine.

I followed the winding Yokonami Skyline road along the peninsula for 15km, enjoying the breathtaking views of the coast from about 150m above it. There wasn’t much traffic save for a couple of school buses.

I reached the intersection with the main road at Sakauchi around 10.30 am and continued west, passing another of the fancy henro huts (17 – Susaki). I hope I get a chance to sleep in one of these.

Reaching Susaki City far earlier than expected at noon I passed an enormous industrial facility with pipelines which went on for more than a kilometre. Was it a power station or something else?

I had considered stopping at the Kawauso no Sato Susaki michi-no-eki (road station) but, since I was so early and still had enough energy, pressed onwards following a road parallel to the Kochi Expressway.

At this point, the trail takes you through a number of long road tunnels which is probably my least favourite thing about the whole pilgrimage since it’s nerve-wracking and dangerous. Luckily there are a couple of detours you can take to avoid the longest of them.

Thankfully I soon reached the Yakezaka-tōge Pass which is forest the whole way. There were actually a lot of spots along this section where landslides had partially destroyed the path but nothing impassable.

At this point, I had covered 35km and I noticed that my left big toe had gone numb. Stopping to take a look everything seemed fine so I hobbled on.

Just outside Naka-tosa Town I stopped at a Lawson combini for some dinner (there didn’t seem to be anywhere else) and realised as I spoke to the store clerk that they were the only person I’d spoken to today except for the hotel manager. I’m in quite a remote spot now and there don’t seem to be many walking henro.

Weirdly the Lawson had a sake shop attached to it with a table where I ate my food and, as I was finishing, another henro I’d met a couple of days earlier walked in. He’s been doing the pilgrimage by bus/train so I wasn’t sure why he wasn’t further ahead already but it was nice to see a familiar face.

Just as my iPhones pedometer reached 40km I found a nice hut under which to camp a short distance into the Soemimizu trail. In fact, there were two huts about 10 minutes apart but in the first, I found a note written in English saying the second was bigger so that’s where I went (thanks to whoever wrote it).

I had my camp set up by 6 pm with enough light left to get myself organised. Tomorrow I’ll reach Iwamoto-ji (岩本寺 – 37) and then continue towards Cape Ashizuri.