There’s been a lot of talk of web applications overtaking and replacing traditional client-side applications and in some respects it’s already happened. I spend approximately 80% of my computing time in Firefox and to me a computer without an internet connection is a bit of a blunt tool these days. The main upside to moving online is that you can access your data/services anywhere regardless of what operating system you’re using and there is no need to worry about backups. Some paranoid types worry about privacy and security but at the end of the day it’s in the best interests of the service provider to protect your content and respect your privacy if they want to retain the trust and custom of its users. 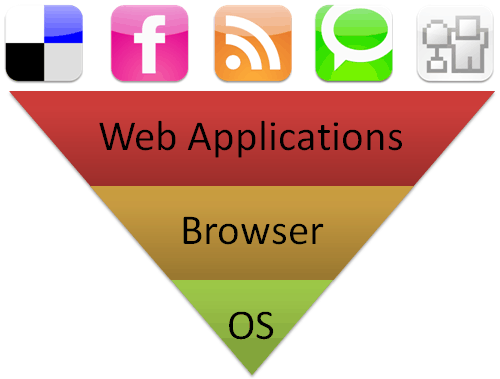 With all this in mind you’ve got to wonder what the market is for a bloated operating system like Windows Vista where users will only ever use 20% of it’s functionality (mainly because the rest of it’s utterly incomprehensible/broken). I’d love to see someone develop a bare-bones operating system based on Linux (kernel, core GNU services & X11) which provides simply the browser as the user interface with common plugins & codecs, necessary networking facilities and nothing else. With a bit of polishing you’d have a potentially powerful system which wouldn’t require high-end hardware to run. For those who need an even more integrated experience there are plenty of plugins available for browsers such as Firefox which enrich the experience even further.

If you’re not already familiar with the world of online applications here are my top-10 favourite web apps:

To my mind this is all a precursor to something much bigger – clearly the likes of Google have already seen this coming and are quietly ramping up in preparation as well as leading the way. I still like my idea of the E-brain Construct but it needs more refinement with some practical examples… we live in exciting times 🙂