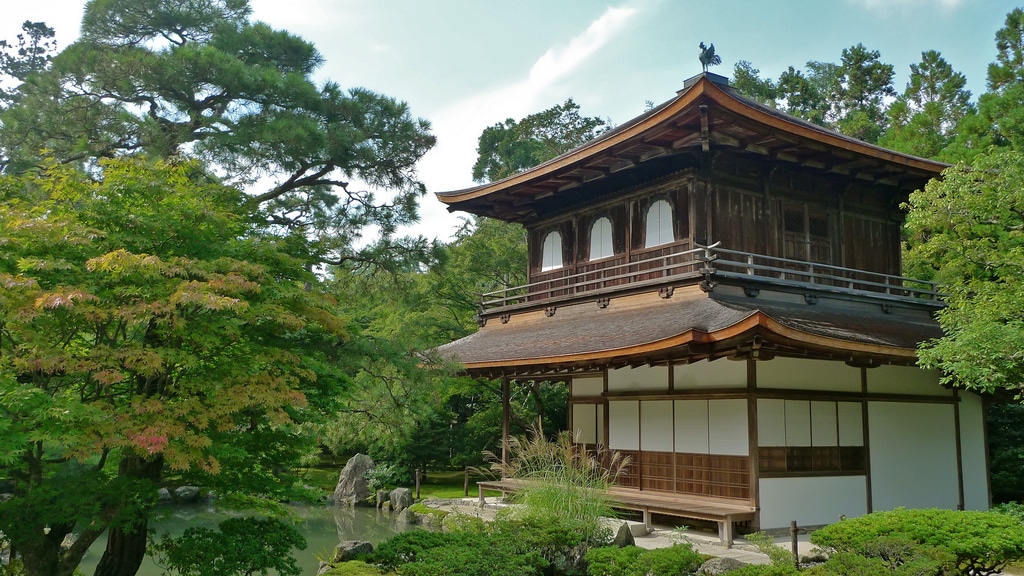 On the morning of my final day in Kyoto I headed back to Northern Higashiyama to follow the Philosopher’s Walk (哲学の道), a pedestrian path that follows a cherry-tree-lined canal between Ginkaku-ji and Nanzen-ji, passing a number of temples and shrines along the way. As it was early I virtually had the place to myself and was about as idyllic as you can imagine.

The route is so-named because of the influential 20th-century Japanese philosopher Nishida Kitaro who is thought to have used it for daily meditation. The path is most visited when the cherries blossom between late March and early April, and again in November when autumn arrives.

My first stop along the path was the particularly tranquil Honen-in temple which can be found hidden among the lush trees through a thatched gateway beyond which are two sculpted sand formations and an attractive pond.

Admission is free and upon crossing over the small bridge you are greeted by a number of small secluded buildings around which are more carefully arranged gardens.

Looking around doesn’t take more than five minutes but you may wish to stay longer to soak up the peaceful atmosphere. It’s at moments like this when I wonder why we blight ourselves with mobile technology which constantly interrupts us.

Further down the path can be found the far larger Ginkaku-ji (銀閣寺) temple, otherwise known as the Silver Pavilion, being somewhat ironically named since the founder’s original plan to cover the temple in silver was never carried out. Set in incredibly beautiful gardens this is definitely one not to miss.

What I found most fascinating were the perfectly sculpted mounds of sand, the one above being thought to symbolise Mt. Fuji. I overheard an American proclaiming that it “must have been made by a machine” – I almost wanted to hit him.

The juxtaposition of the sharply raked sand with the verdant trees in the foothills behind creates a strange harmony between the organic and that which has been intricately arranged by man. I’m not entirely sure what the 15th-century creators were thinking but I like it.

On my way through the gardens, I came across an orderly group of Japanese school children on an excursion. Somehow I can’t quite imagine English school kids accepting a uniform like that but at least it would be hard for them to get lost!

Part of the beauty of this garden is viewing it from multiple angles, all of which ingeniously presents the different faces of the strategically placed objects; be it the rocks, small stone bridges, mounds of sand, or the Silver Pavilion itself.

The hills above afford a nice overview of the whole temple and the city beyond which marks the end of the Path of Philosophy which you could easily spend half a day or more exploring.