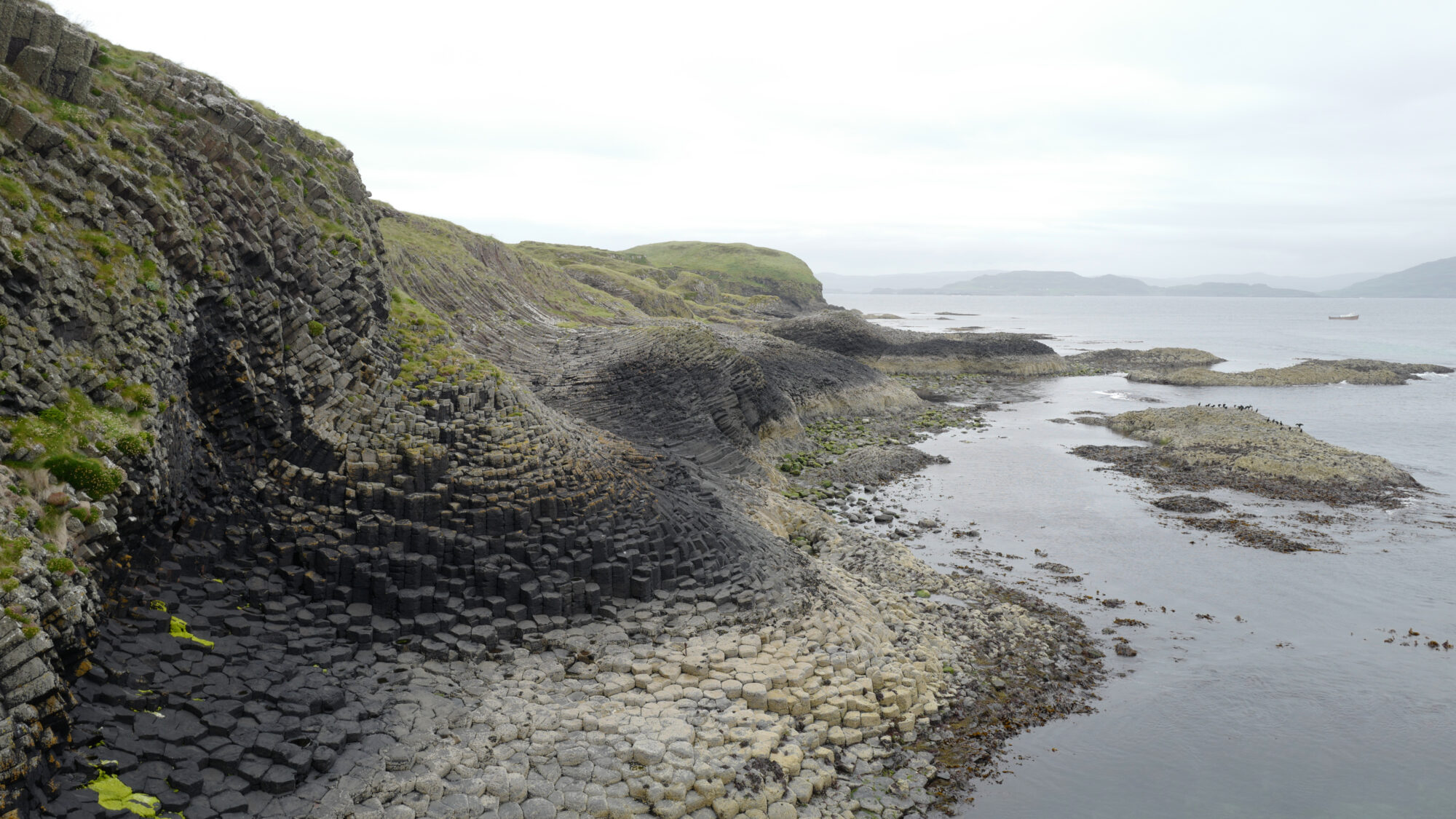 The Treshnish Isles are an archipelago of small islands and skerries (small rocky islands, or islets), lying west of the Isle of Mull, in Scotland. Due to the beauty and remoteness of the Isles and the abundance of wildlife, particularly the puffins, they are a popular day trip for tourists.

We booked a wildlife tour of Staffa and Treshnish Isles with Staffa Tours which departed from the colourful town of Tobermory, on the northeast coast of Mull, on a grey and damp morning in June.

After a bumpy hour and a half on the water, the imposing Staffa island loomed into view. The Vikings gave it this name as its columnar basalt reminded them of their houses, which were built from vertically placed tree logs.

During the Paleocene, the slow cooling of basaltic lava resulted in an extraordinary pattern of hexagonal columns which form the faces and walls of the island. Similar formations are found at the Giant’s Causeway in Northern Ireland.

Despite the rough waters, our boat was able to navigate into a small inlet where we disembarked on a concrete jetty. Steep stairs led up to the grassy roof of the island where we were free to roam around.

Such mathematically uniform rock formations are a real wonder of nature and it has inspired countless poets throughout the centuries to commit pen to paper.

Staffa’s most famous feature is Fingal’s Cave, a large sea cave located near the southern tip of the island some 20 m high and 75 m deep. This cliff face is called the Colonnade or The Great Face and it was the inspiration for Felix Mendelssohn’s Hebrides Overture.

Staffa was designated a National Nature Reserve in 2001.

Our next stop was Lunga, the largest of the Treshnish Isles, home to thousands of breeding puffins, who allow visitors to approach within a few feet of them.

Almost immediately after climbing up from the rocky beach, we were surrounded by dozens of the 2,000+ pairs of penguins which breed on the island. They are comical little birds who have a lopsided walk and whose short wings beat rapidly as they dive off the cliffs and into the water to catch fish.

While most of the visitors stayed close to the puffin colony, we ventured south and then climbed to the top of the island before heading back north, passing the remains of a ruined village, abandoned in 1857.

Lunga is designated a Site of Special Scientific Interest because of its abundant plant and marine life.

While I would not normally join an organised tour, this one was actually pretty good and we were given plenty of time to explore the islands by ourselves. Seeing puffins up close was the highlight of our time in Scotland.