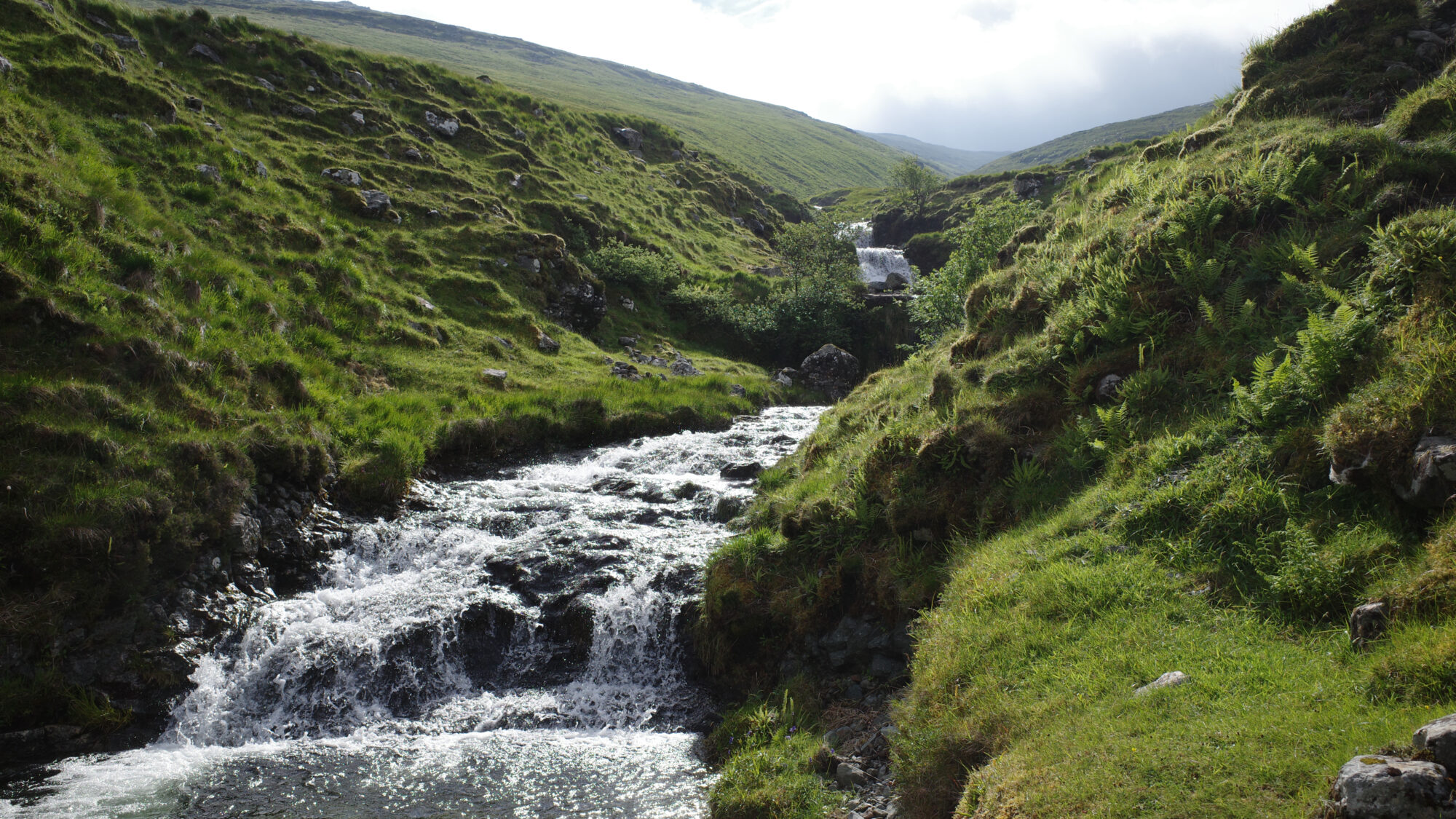 We wanted to get a least one “proper” hike in during our time in Scotland so set our sights on Ben More (966 m) on the Isle of Mull. In comparison to the steep Japanese mountains we’re used to, it felt like a walk in the park but was a nice way to stretch our legs.

We parked our rental car at Dhiseig next to Loch na Keal, and began the walk up following farm tracks beside Abhainn Dhiseig stream. The weather had been bad all week but we’d miraculously managed to dodge the rain thus far and despite clouds hanging in the sky it looked fair.

The path is boggy in places lower down and eventually turns into a scree slope higher up.

We passed a series of waterfalls which were probably the most pictures part of the walk for us since the swirling clouds obscured most of the dramatic views.

As we approached the summit ridge the mist descended and we entered a grey world where visibility became only a few meters and a howling wind forced us to don our rainjackets.

On the ridgeline we followed a series of small cairns which led to the summit. There we met an older man who told us he’d just climbed his last “Munro”.

A Munro is a mountain in Scotland with a height over 3,000 feet (914 m) named after Sir Hugh Munro (1856–1919), who produced the first list of such hills of which there are 282 today. “Munro bagging” is the persuit of climbing all the listed Munros, with Ben More apparently being the one most people save till last. It seemed we were doing things backwards!

After reaching the peak, we immediately begin descending back down the way we had come and once we were out of the mist and wind we found a sheltered spot with a good view to eat our packed lunch.

On our way down we were surprised to see a fair number of people beginning their walk up considering the time of day and the poor conditions.

We arrived back at the car park at 1.30 pm, five hours after we had started. Walkhighlands has a good description of the entire route.

Since we had the afternoon free, we drove east to visit Duart Castle. The castle dates back to the 13th century and is the seat of Clan MacLean.

Sited on a high crag at the end of a peninsula jutting into the Sound of Mull it’s a impressive building that was brought back from ruin in 1911. The castle has been under nearly continuous restoration since then funded by donations, events, and visitors.

The story of Lady’s Rock that can be seen from the castle is quite an eye opener:

In 1527, Lachlan Maclean of Duart decided to murder his wife, Lady Catherine Campbell, a sister of Archibald Campbell, 4th Earl of Argyll. He rowed out to the rock one night at low tide and left his wife stranded on the rock to die. Looking out the next day from Duart Castle he observed the rock was devoid of life, so he sent a message of condolence to the earl at Inveraray Castle, indicating that he intended to bring his wife’s body there for burial. Maclean duly arrived at Inveraray with an entourage of men and the coffin. He was immediately taken to the dining hall of the castle for refreshment only to discover Lady Catherine waiting for him at the head of the table. She had been rescued during the night by boat from Tayvallich that had passed by the rock.

No word was said of the incident by Argyll or his sister during the meal and Maclean was allowed to make his escape. He was murdered in his bed in Edinburgh some time later by Sir John Campbell of Calder, another of Lady Catherine’s brothers.