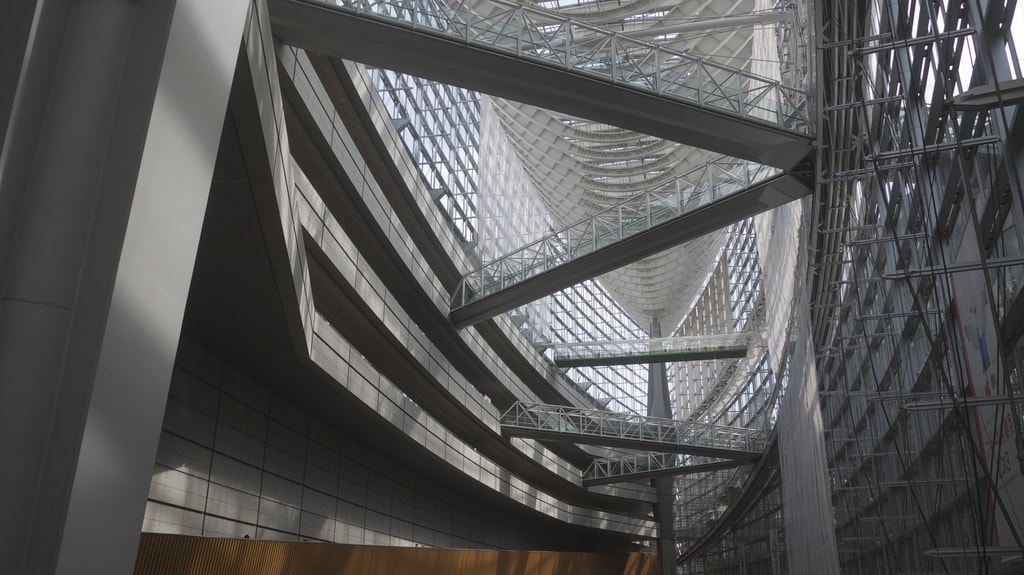 Like the stream of identical salary men you see scurrying around at rush hour and the eclectic fashions on display at Harajuku, Tokyo’s skyline is a bit of a contradiction. On the one hand, there are endless emotionless apartment blocks but on the other, there are some of the most fantastical expressions of modern contemporary architecture in the world.

One such example can be found standing between Tokyo and Yurakucho stations, uninspiringly named the Tokyo International Forum (東京国際フォーラム), it’s anything but inside.

The enormous elliptical structure sits 3 stories below ground and rises another 11 high with a 197-foot-tall glass curtain wall on one side connected to a number of conference halls on the other by suspended bridges which span its width.

Opened in 1997 the convention and art centre was designed by New York architect Rafael Viñoly. An enormous curved ramp hugs its sides, allowing visitors to walk all the way from the ground level to the roof.

The open-sided catwalks provide a stunning view but are not for the faint of heart.

Two enormous tectonic columns hold the whole structure together and stabilise it against earthquakes.

A warning sign tells parents not to use buggies on the ramp but I think it might be quite a fun ride!

The northern side window provides a great view of the train tracks below, allowing you to watch bullet trains arriving and departing.

The soaring Glass Hall serves as the main reception area for the Forum. The glass facade uses approximately 20,000 square meters of laminated, heat-strengthened glass (similar to that found in car windscreens).

From the top, you get a clearer view of the roof whose steel ribs mimic the hull of an elongated boat.

I’d love to come back and see the building lit up at night.

A plaza outside serves with seating beneath zelkova trees and a number of sculptures.

Also worth checking out nearby the Forum is the newly renovated pre-WWII Tokyo Station and the beautifully designed KITTE shopping complex in the Central Post Office building.