At last the Broadband tap has been turned back on at home so I’m back to sucking the world through a straw to the tune of a 2mb connection (our part of London can’t get 8mb quite yet). I’ve also upgraded my Ubuntu install to 6.04 (development version) which has brought with it a number of niceties and of course the brand new Gnome 2.14. If you like the bleeding edge it’s well worth trying.

Talking of blood… last weekend I went to see The Hills Have Eyes and I can honestly say I’ve never felt so shocked by a film as I did by this, and I’ve seen my fair share of horror films! Perhaps this was because it was on the big screen so there was no avoiding the raw brutality of the action but it had an intensity unlike anything I’ve seen before. The story starts of with an average family taking a trip through the American southwest on holiday. After a “helpful” tip from a local they take what they think is a shortcut trail but will of course end up to being the route to their massacre.

They venture into an area originally used by the U.S. Government for nuclear testing. (There is an element of truth here in that testing was indeed carried out here as documented in Trinity and Beyond). When the family car breaks down they soon realise that all is not what it seems and that the area perhaps isn’t as empty as it looks! 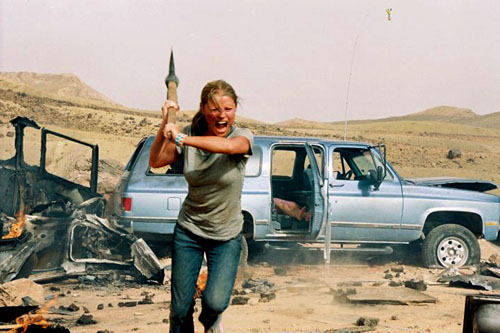 From here on in things get really nasty with one scene of frensied carnage which takes place inside a caravan that you will not forget in a hurry. Soon most of the adults are wiped out then it’s a fight for survival for the rest…

Excellent visual direction and some genuinely frightening moments – highly recommended if you can stomach it (7/10)!