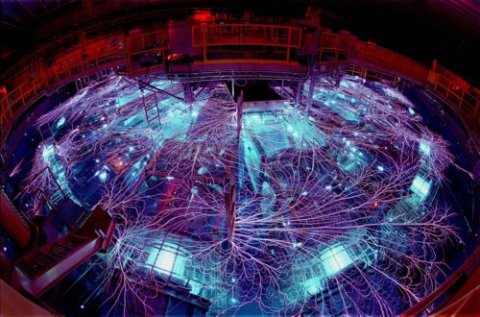 The picture above shows The Z Machine which is an accelerator used to simulate the awesome power of a nuclear explosion using ridiculous amounts of electricity:

“The Z uses a short burst of intense electricity – only a few 10 billionths of a second long – that forces an ionized gas to implode. The process is called a z-pinch because the pulse creates a magnetic field that squeezes particles in the vertical direction… At the center of the z-pinch, in the space of a small soup can, gas particles race at each other at a million miles an hour. The collisions result in X-rays and extremely high temperatures.”

Wow. This reminds me of the documentary film ‘Trinity and Beyond‘ which charts the disturbing development of nuclear weapons in all their devastating forms. At the time I saw it I was shocked to learn just how much these things have been tested for real in the past and their huge impact on the places they were used. Whilst the Z Machine is not used for military applications it’s certainly a lot better than blowing up and radiating huge chunks of the earth!