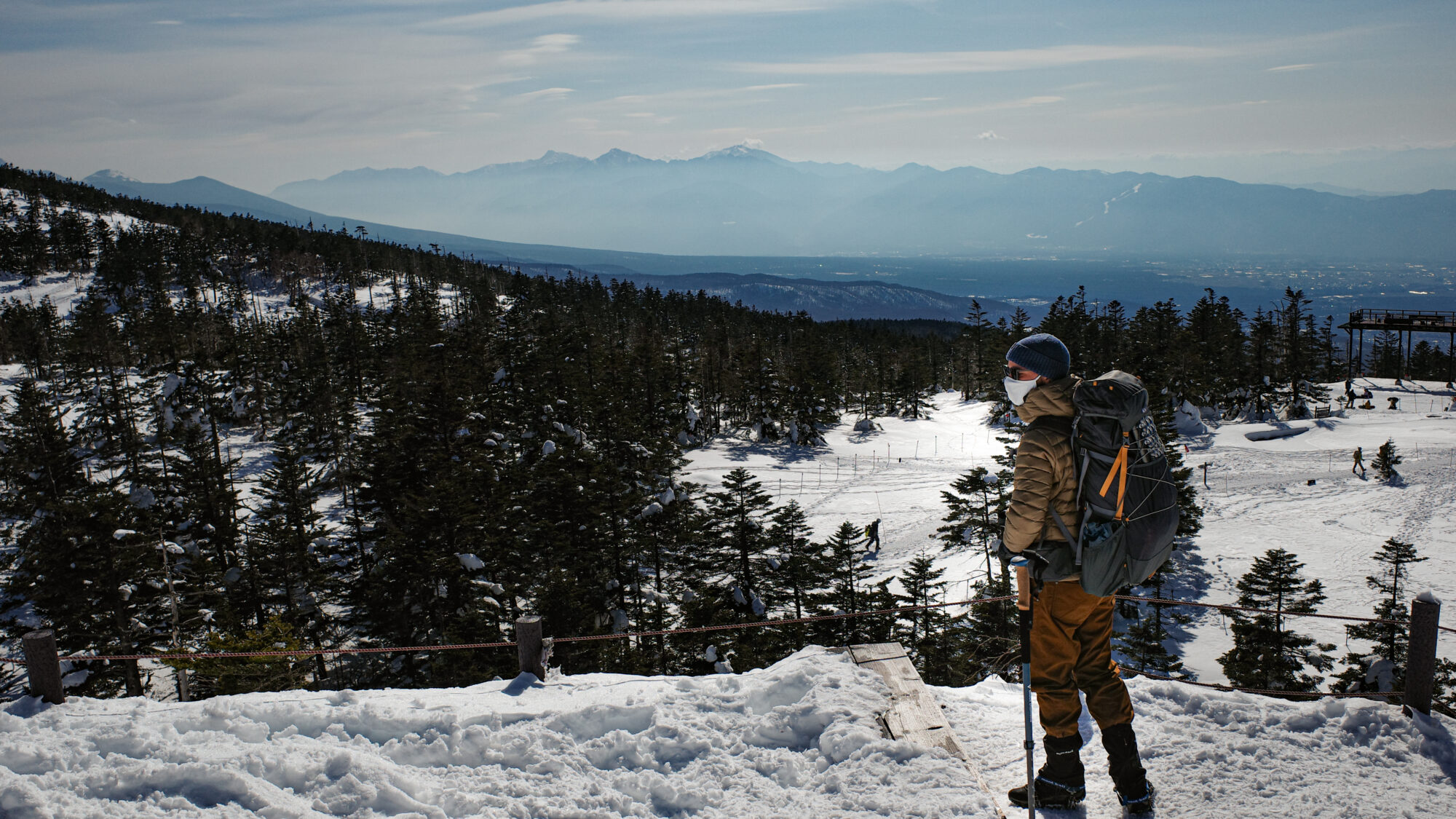 Back in the winter of 2019, we had our first experience of snow camping on the Southern Yatsugatake (Minami-Yatsugatake) mountain range. Having fully expunged the memory of how cold it was, we decided for a second outing in February 2021, this time heading to Northern Yatsugatake (Kita-Yatsugatake).

In the morning a comfortable Azusa train whisked us from Shinjuku to Chino Station (茅野駅) in a couple of hours from where we jumped on a bus which wound its way up icy mountain roads for another hour.

Given that we only had the weekend for our trip, we opted to take the oddly Germanic-themed Kita-Yatsugatake Ropeway (北八ヶ岳ロープウェイ) up to 2,237 m, popular with people skiing and snowboarding. We’d last visited here in the winter of 2018, staying overnight at Shimagare Sansou Mountain Lodge (縞枯山荘), but never got around the writing about it.

From the station at the top, it was an easy hike along a well-marked route to the summit of Mt. Yokodake (横岳) at 2,472 m, passing Kita-Yokodake Hut (北横岳ヒュッテ) on the way up. From here we were treated to spectacular panoramic views of the Hida Mountains (飛騨山脈), also known as the Northern Alps (北アルプス).

On the other side of the peak is another lookout point, Kitayokodake (北横岳), from where we could see our intended route stretching out towards Mt. Tateshina (蓼科山) at a similar elevation but with a 500 m trough that we’d need to cross in-between.

The trail immediately begins descending steeply under the cover of the trees and this is where things began to get interesting. Since few people had walked this route recently the 1.5 m+ of snow underfoot had not been compacted meaning that every few steps we would fall waist deep into it. A few times I got thoroughly stuck and had to find novel ways to pull myself out!

Progress was extremely slow going and it took us 2 hours to reach Kikko-ike Pond (亀甲池) rather than the 1.3 hours the map estimates. Our original plan had been to continue on to Futagoike Hutte (双子池ヒュッテ) but it was already 4.45 pm and given the sun would soon be setting we decided to make camp beside the snowed-covered pond.

Finding a spot of clear snow, I levelled it with a snow shovel and compacted the base with my shoes. We drank a very welcome cup of hot tea while waiting for the snow to freeze, creating a hard flat surface.

With the light fading and the temperature dropping, we got into the tent as soon as it was up and started work on heating up dinner (curry rice and brownies!).

In addition to the tent footprint, I placed an emergency blanket below our sleeping pads to reflect as much heat as possible back up. We have sleeping bags rated for freezing temperatures but also used some heating pads on our feet and stomach for extra warmth.

Properly sleeping at 2,000 m was out of the question, but we fitfully dozed. Shortly after 11 pm, I realised that the ground beneath us was moving. It took another couple of seconds to realise that it was an earthquake and a big one at that. The whole mountain felt like it was viscous jelly moving with enormous momentum. Unnerving to say the least.

The ground settled down after 30 seconds or so. What was most concerning was that we had no phone signal and couldn’t get any information from the outside world. I lay there imaging us emerging from the mountain the next day to find Tokyo flattened. As it turned out, it was a 7.3-magnitude quake that was believed to be an aftershock of the massive 2011 quake. Luckily nobody was killed this time.

Stirring shortly after sunrise, we heated up oatmeal with blueberries for breakfast before packing up. The food and work did wonders to warm us up.

Because we hadn’t followed our original plan, we were able to take a shorter more direct route. Stepping gingerly in the footprints of whoever had been along there last, we followed the valley floor west for an hour towards “Tensyojihara Field” before turning north and beginning the ascent.

The trail was fairly easy to follow, although when we reached the tree line we had to push our way through bows heavily weighed down by snow.

After climbing 400 m, we arrived at the snowed under Tateshinasanso Hut (蓼科山頂ヒュッテ) at 11.30 am (2,350 m). Here we paused to make a cup of tea while admiring the peak of Mt. Tateshina (蓼科山) towering above. We considered climbing to the top (2,531 m), but it looked pretty steep and without ice axes we thought better of it.

Instead, we began the descent down the opposite side of the mountain. Through the trees, we were spoiled to another tantalising view of the Hida mountain range.

The route down was fairly well-trodden and by 1 pm we were passing Tateshina Shrine (蓼科神社奥宮 一ノ鳥居) which was a short distance from Shirakaba Kogen Kokusai (白樺高原国際スキー場) ski resort.

Taking the gondola lift down to the bottom of the ski runs, we went in search of something for lunch. Everywhere was closed except for one small place which was serving reheated pot noodles. Beggars can’t be choosers!

From here it took a couple of busses and a few more trains to reach home late in the evening. It had been a long distance to travel just for the weekend but felt great to have escaped after so many months stuck in one place.