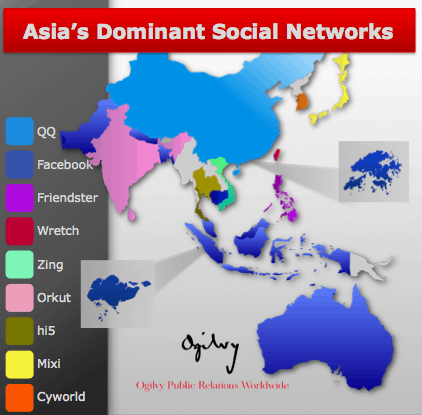 While Facebook and Twitter might rule in the US and Europe it’s a whole different game in Asia. If you follow Thomas Crampton (Asia-Pacific director of 360 Digital Influence for Ogilvy) then you’ll know he’s often posting insightful presentations about Social Media in Asia. I’ve been bookmarking them for a while and thought I’d share a few of the better ones here with the key takeaways (and other miscellanea).

Clearly, Social Networks and Social Media in Asia is dominated by local players who, although partly inspired by the success of western services, have diversified their offerings to suit local tastes and interests. Outsiders will find it hard to compete in this space but may utilize the tools they offer as a platform for targeting their users. Detailed research will be necessary to understand the incentives for participation and engagement to gain and maintain trust. Mobile and gaming are also big factors here with a greater emphasis on having fun and the form factor content is consumed on playing a major role in its consumption.