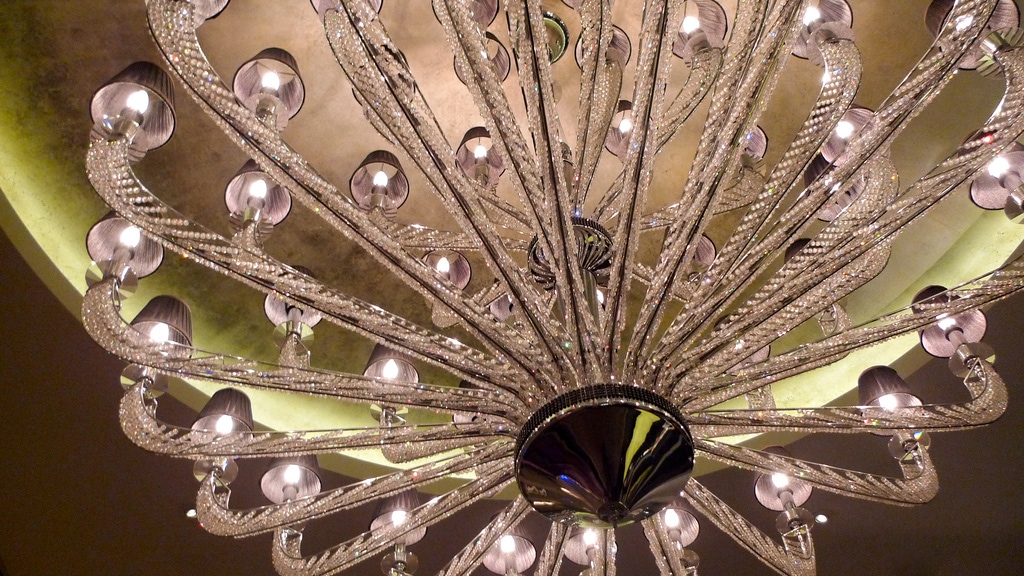 Last weekend I took a short trip to Taiwan, a mere 1.5 hours away from Hong Kong but in many respects a world apart from the mainland (depending on who you ask). Arriving Thursday evening in Taipei my first stop was Hotel Éclat, a stone’s throw away from Daan MTR station. As far as posh places I’ve stayed in without paying go (1, 2) this probably tops the list for style and sheer exuberance.

If the exterior was anything to go by you knew you were in for a treat inside. Considering that Louis Vuitton was next door there were no prizes for guessing what sort of clientèle the district caters for.

While the lobby is small its decor is something else. Three enormous glass/crystal chandeliers hang from the ceilings with plush surroundings punctuated by original art pieces from Andy Warhol and Salvador Dali (among others).

Next to the lobby area is the lounge where breakfast and afternoon tea are served. If you want to visit for the afternoon tea book well in advance since space is severely limited and is apparently very popular (with ladies who lunch).

After checking in we were led to our room by a young woman who explained the features of the room and gave us a complimentary bottle of Cabernet Sauvignon. Staff were polite, attentive, spoke perfect English and were always happy to help (and wide awake even when checking out at 5 am Monday morning!).

Some serious money must have been spent on decking out the interior. Although the minbar is “free” you undoubtedly pay for it in the equally pricy bill at the end.

The room was a little small but comfortable with more gadgets than any sane human could learn in a short period of time (I counted 5 remote controls!). As you might everything was high-spec with a Bang and Olufsen hi-fi, Mont Blanc stationary, Salvatore Ferragamo toiletries, Nespresso coffee machine, Philippe Starck ghost chair, massive LCD TV, automatic curtains, and many other small touches.

While the whole hotel has free wi-fi in my experience it didn’t work very well – it would intermittently cut out without warning and then take 10-20 minutes to come back on. I wasn’t alone in having these troubles and the staff promised to look into it.

One of the coolest things was the polyvision glass window between the bathroom and the main room. In its normal state, it was opaque but at the touch of a button, it fogs for privacy. I’m not sure what would happen in the event of a power cut 😀

The toilet had the usual array of scary-looking functions but I thought the auto-opening bin was a bit OTT! The rain shower was nice but the design of the tray meant that water spilt onto the floor and made a bit of a mess.

Breakfast options are minimal but fresh and delicious. I had the eggs benedict twice and thoroughly enjoyed it both times (note I usually hate eggs). The china was a little flowery for my liking but not out of line with the decadent surroundings.

If trendy chic interiors (bordering on gaudy) are your thing then Hotel Éclat is well worth checking out.